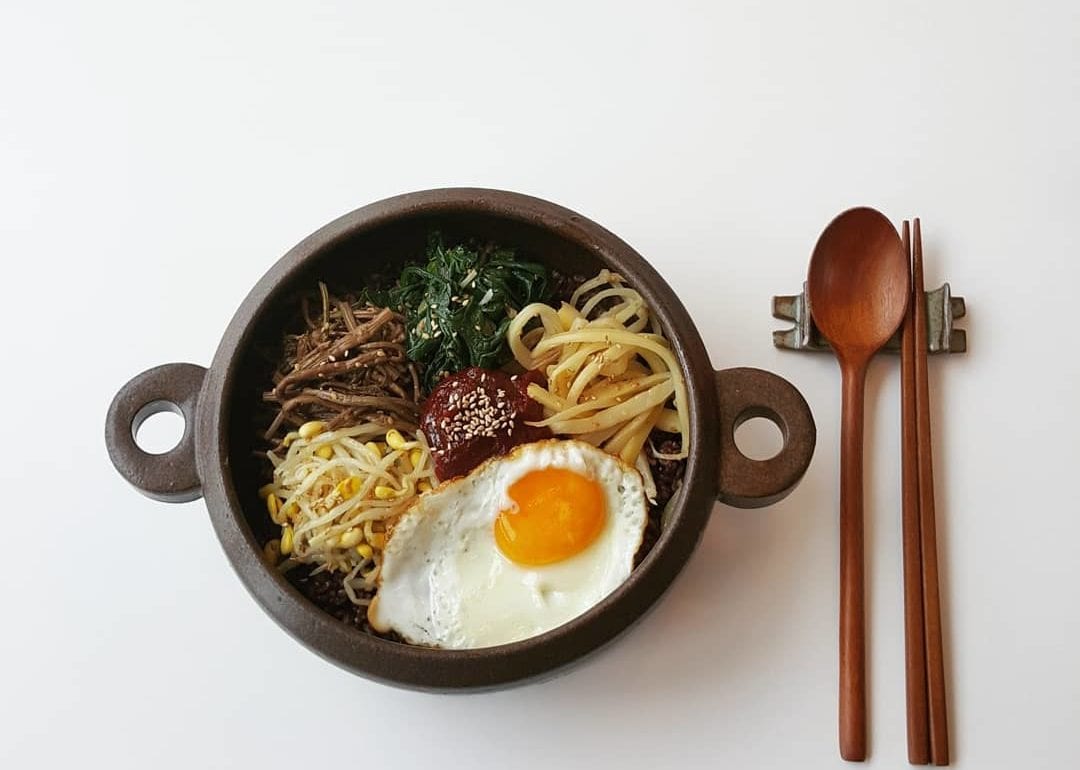 Bibimbap, which literally translates into “mixed rice,” is a warm bowl of white rice with sautéed and seasoned vegetables, gochujang (red chili paste), and typically topped off with a fried egg.

South Korea’s Jeonju province is most famous for the dish, but luckily, there are delicious bibimbap spots all across the country. At 10 Magazine, we’ve compiled a list of the top 7 bibimbap spots you should visit in South Korea!

Gogung, which translates to ‘old palace,’ first opened its doors in South Korea’s Jeonju province. Since 1996, it has expanded to other locations around the country and has several locations right in Seoul, one of which is in the Jogno district.

Though the prices here are a bit steeper than other bibimbap spots (11,000-37,000 won), Gogung is an absolute must-try according to both locals and online reviews.

The Veggie Eating Bear (V.E.B.) has been around for over 10 years, and the vegetarian bibimbap at this spot is ridiculously good. The red pepper paste (gochujang), which is usually used as the main sauce for bibimbap, is replaced here with a special soy sauce that the V.E.B. makes in-house. Prices range between 8,000-14,000KRW

Located in the Mapo district of Seoul, V.E.B. is widely known for it healthy and tasty dishes and is a must-try for vegetarians looking for healthy finds in the city.

Hangukgwan is one of the best bibimbap spots in Jeonju. With tightly packed tables separated with small wooden dividers, this restaurant has a cozy feel to it that is perfect for a meal out with friends or family.

Mokmyeok Sanbang is named after Seoul’s Namsan mountain which used to be known as ‘Mokmyeok.’ It was established by the government of Seoul to promote Korean culture and cuisine.

Mokmyeok Sanbang, with its hanok interior, has a traditional feel to it. Online reviews have raved about the bibimbap at this location, some pointing to the delicious sesame oil as the key ingredient to the dish’s success.

Gwangjang Market, located in the Jongno district in Seoul, is famous for its delicious food stalls. Here, you can find several bibimbap stalls, where mountains of fresh bibimbap ingredients are piled up and dishes are made-to-order.

Sit on a bench right against the aisles and enjoy a warm bowl of bibimbap with a side dish for only 5,000KRW! The lady will customize your bowl with over a dozen different ingredients, such as bean sprouts, Asian pear, mushrooms, and chives.

Established in 1956, with 3 branches distributed around Seoul, Jeonju Jungang Hoekwan is largely acclaimed by tourists visiting Korea. It serves a distinctive Jeonju-style bibimbap alongside other types, and its bibimbap is regarded as one with a rich and strong flavor.

At Ondal restaurant, located on the second floor of Walkerhill hotel, you’ll find a delicious bowl of bibimbap made with only the finest organic ingredients.

If you’re armed with a packed wallet and aren’t afraid to spend the money, enjoy a luxury dining experience at Ondal, where chefs create modern renditions of cuisines from the old Korean nobility.