6 Dangers That Await You At The Boryeong Mud Fest

6 Dangers That Await You At The Boryeong Mud Fest 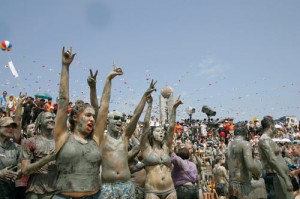 You may be making plans for this weekend and dreaming of the dirty delights of the Boryeong Mud Festival, but I’m here to warn you of the sometimes deadly and despicable dangers that may be awaiting you down at Daecheon Beach…

1. ILLNESS!
What’s that rash on your back? Is it infectious? Have you succumbed to a deadly mud virus? No, probably not, but back in 2009 two hundred visitors had to head to the nearest hospital after contracting “dermatitis palaestrae limosae” – a skin condition that had those poor party goers itching after they indulged in some pre-mud festival events. The mud from Boryeong is filled with minerals and all sorts of other goodies, but be prepared to get down and dirty, and if you feel the need to scratch you may need to see the doc! You never know what you may catch in the festival’s “mud prison”…
2. EXPOSURE!
Do you want muddy pictures of yourself plastered all over the internet? Have you always dreamed of sleazy shots of you in your skimpy beach outfit being published by the international press? If so, you’re in luck because the Boryeong Mud Festival has a horde of professional photographers, amateur photographers and most definitely not professional paparazzi wannabes waiting to take a photo of you in your sludge covered speedos or bikini. In the past the British tabloids have had a field day with festival footage (or this example) and the official photo contest sometimes receives some interesting submissions. Take care to wear your best beach wear and be wary of photography enthusiasts who seem to be taking advantage of certain embarrassing angles!
3. DRUNKS & PERVERTS!
There are plenty of fun loving festival goers who enjoy a nice long soak in the mud and then a couple beers or a shot of soju, but sometimes a few too many drinks can lead to disaster. Back in 2011, The Marmot’s Hole gathered details on that year’s booze fueled incidents including a less than sober US soldier inflicting damage on a car, a drunken US soldier’s wife inflicting damage on two Korean girls and a sozzled English teacher who thought throwing flower pots in a restaurant might be fun. In the same report there was also mention of child molestation by a couple of Indians, and a Thai photographer who was focusing his camera on rather personal places. Fortunately these cases are the exception, not the rule, but watch out for those who have imbibed too much and may turn muddy fun into muddy fighting or much much worse. It’s also worth noting that Boryeong is featured in the Matador Networks’ book 101 Places To Get F*cked Up Before You Die, listed as number seven in the “Blowouts” section of the book…
4. MISSING MONEY & MISSING PERSONS
Back in 2012, The Three Wise Monkeys reported on the strange disappearance of Charles Jeong, a tour guide who suddenly vanished whilst attending the festival with a group of tourists. He wasn’t the only thing that went missing, so did their money, and the group found themselves surrounded by bus drivers and minbak owners looking for the cash they rightly deserved. Make sure to take care of your cash and other valuables, and if you’re joining a tour, then make sure that they foot the bill so you don’t have to! You don’t want to end up stuck in the mud!
5. GIANT WAVES!
Tsunami alert! Well… okay… maybe no tsunamis, but back in 2008, just a couple of months before the festival began Boryeong was hit by a giant wave! This several metre wave, came as a complete surprise and led to the deaths of nine people after it rushed to shore. There haven’t been any more freak waves reported since then, but if you do decide to go for a dip stay safe and make sure you’re in sight of those on shore.
6. SHARKS!
Forget giant waves in 2008, you should be more worried about the sharks in 2014. Just one month ago The Korea Times reported that the waters of Boryeong have become “a breeding ground for dangerous sharks”. Recently a pregnant hammerhead shark and a young great white shark were captured relatively close by to where all the mud related fun happens. If only Chief Brody was here to protect us…

So many dangers at what might seem to be an innocent celebration of muddy fun. If these six aren’t enough to scare you away from this weekend’s mud related festivities, then check out Gemma Wardle’s insightful piece on the 10 Do’s and Don’ts of the Boryeong Mud Festival.