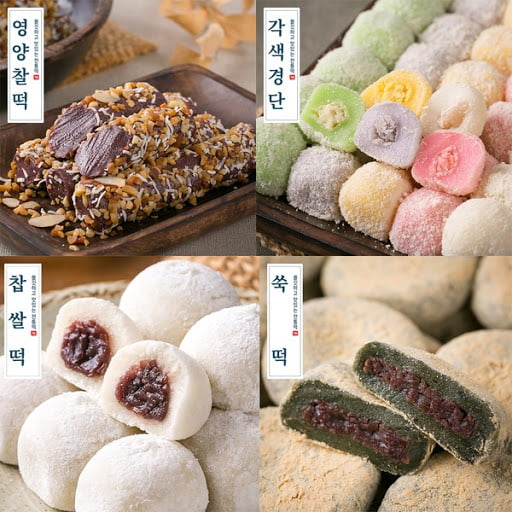 Before there was bread in Korea, there was tteok, and this chewy but choice treat is still a major part of holidays and other important occasions.

To label tteok as merely a food is not really doing it justice. Even in a country that sticks to its traditions as Korea does, this is one of the most common symbols of celebration. Hardly a week will pass at work when someone is not passing it around for some reason or other, often after getting married. Used in everything from popular savory preparations like tteokbokki and tteokguk to the flower-shaped fried rice cakes known as hwajeon, it would be a giant task to even begin to put on paper all the different kinds of tteok that fulfill these needs. Today, we’ll stick to highlighting the most common ones.

Let’s start by explaining what tteok is. Quite simply, tteok refers to cakes of different shapes and sizes made from glutinous rice flour. These cakes range from large slabs to tiny concoctions. The cooking process typically involves shaping the rice flour and then steaming or boiling it. However, there’s more than one way to skin a tteok, as I learned on my tour of the folk village in Namsan during Chuseok: it’s also beaten, pounded, and pan-fried.

Of the steamed tteok, my favorite is the songpyeon (송편) served at Chuseok. They are steamed over pine needles and have a distinctive half-moon shape to match the holiday (which takes place on the harvest moon). They are filled with various tasty ingredients, including sesame seeds and of course red beans (pat 팥).
Another common variety is the rainbow-colored mujigae tteok (무지개 떡). It is passed out at weddings or doljanchi (first birthday party 돌잔치) and was my first taste of rice cakes. That particular version didn’t win me over straight away, but I was subsequently converted after trying a few other varieties.

The pounded rice cakes, injeolmi (인절미), are probably the most foreigner-friendly as they tend to be softer and offer a great contrast between the tteok and the dusted coating of sesame or red bean powder. The tteok is steamed first then pounded with a set of special utensils. I had a go at the pounding and it’s not easy, but the results are worth the effort.

The most artistic of the rice cakes are the flower pancakes, hwajeon (화전), which are often served at tea ceremonies. These are small little balls of rice dough that are flattened out and pan-fried. Just before they’re done cooking, flower petals selected according to season are pressed into the top and lightly cooked. As we kick off the New Year, you will be surrounded with plenty of chances to enjoy the staples of Korean culture, but keep in mind to have a bowl of tteokguk to mark the passing year and a bite of red tteok to keep the New Year Grinch at bay.

Tteok of the Town Netizen’s Picks

This chain of rice cake sellers calls itself â€œthe premium riceteria, and with a name like that it’s bound to be good. Take a peek inside to see how colorful tteok can be (hint: it’s not just white). They have locations all around Korea, and they even serve tea and desserts. Visit their website (Korean) to see if there is a Bizeun near you. bizeun.co.kr 02-6331-3445

Two Korean chefs trained abroad returned to Korea to start this tteok café, which opened its doors just 2 months ago. Table space is limited, so if you want to enjoy your tteok and tea sitting down, you should call ahead for reservations. Located in Insadong at Gong Gallery. It’s open 8:30 am – 7 pm every day, though they get started a little late on Sunday mornings. Come in after 11 am for the full selection. 070-4209-0819

This one’s located appropriately enough on the 1st floor of the Institute of Traditional Korean Food near Changdeok Palace. Head here for items that are almost too pretty to eat, like the adorable pink maehwatteok (매화떡) topped with a tiny edible green leaf (W1,000). If you’re curious to learn more about the food, enlightenment is just over head-on the the 2nd and 3rd floors of the same building in the Tteok Museum (tkmuseum.or.kr). There’s also an Insadong location to visit between sightseeing stops. 02-741-5411