Rookie or Expert: Korean Subway Hacks You May or May Not Know About

Rookie or Expert: Korean Subway Hacks You May or May Not Know About

..Just a few facts that could either make your life easier or make you more paranoid

The Korean subway system is guaranteed to land on the top picks of any poll out there about ranking subway systems around the world. Let’s be honest, even New York’s got nothing on Seoul when it comes to the subway. It is by far easier to figure out than any of the other transportation methods, such as the bus (in which the stations are written only in Korean and you can barely hear the English announcements!) — so here are some hacks and facts that might help you out on your subway endeavours: 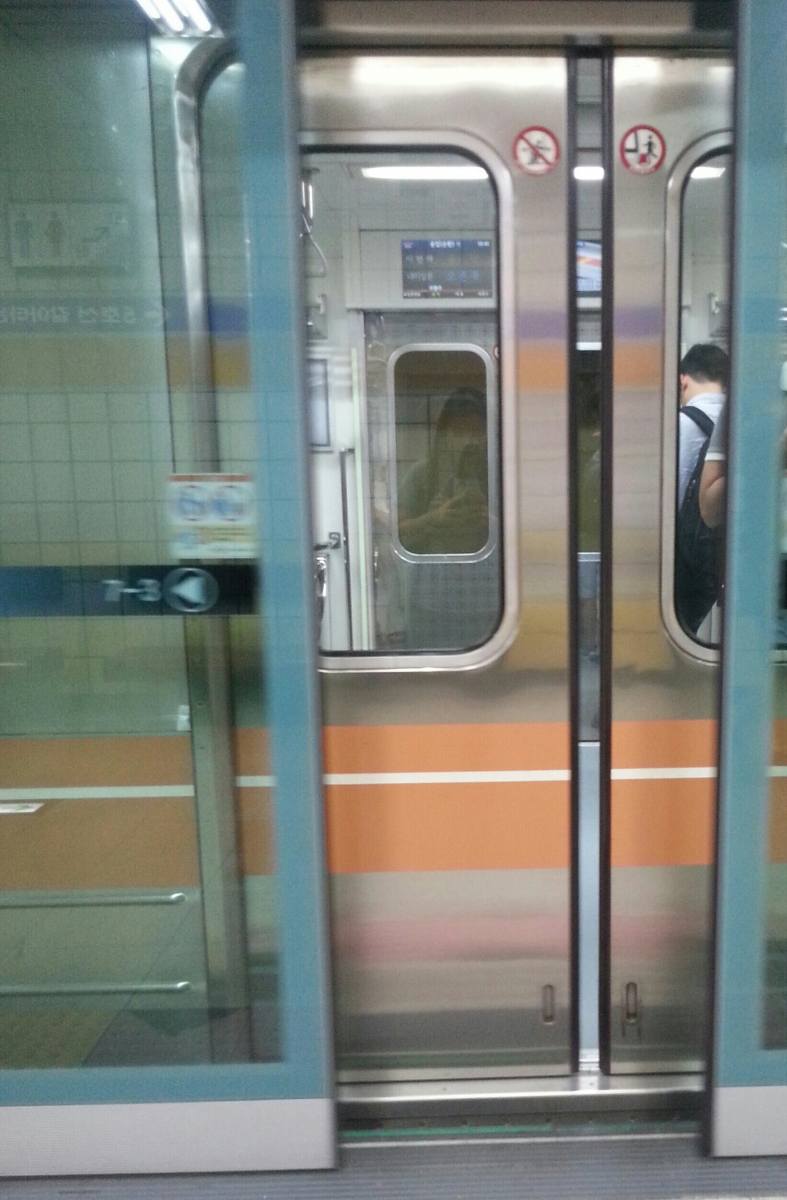 Sorry to start out with the gruesome, but there was an accident just over a week ago at the line 2 Gangnam station, in which a man was killed because he was stuck between the train and the screen doors (he had gone in to do some repairs).
These doors may seem all high-tech, clad with automatic sensors, but it still is a good general rule to not touch them, and it is never a good idea to force or try to beat them. Diving into the subway when the screen doors are closing is not a wise choice, so don’t do it. 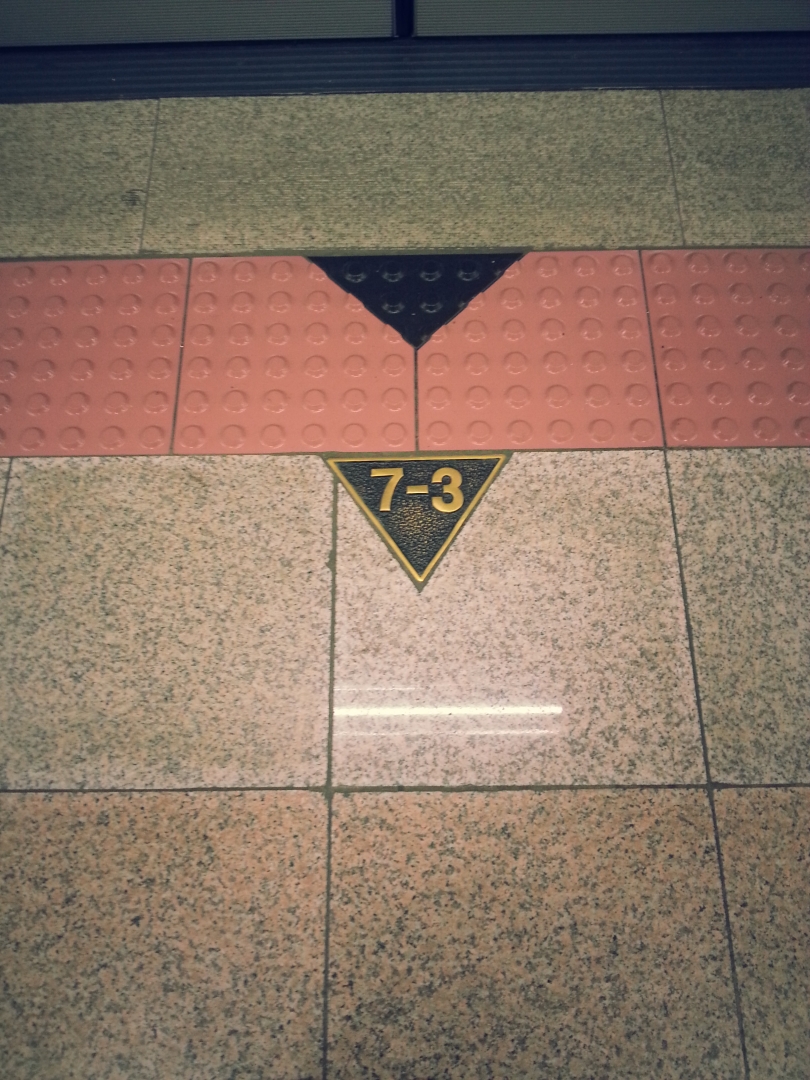 If you look closely, you’ll notice that each door of the train is numbered. We all know how hellish it can be during the busy times, especially if you have to transfer to another line. If you type in your destination, most apps and search engines will tell you which entrance leads to the fastest transfer! If you feel funny about snooping around looking at the floor to find the numbers, no worries, they are also indicated on the screen doors as well. 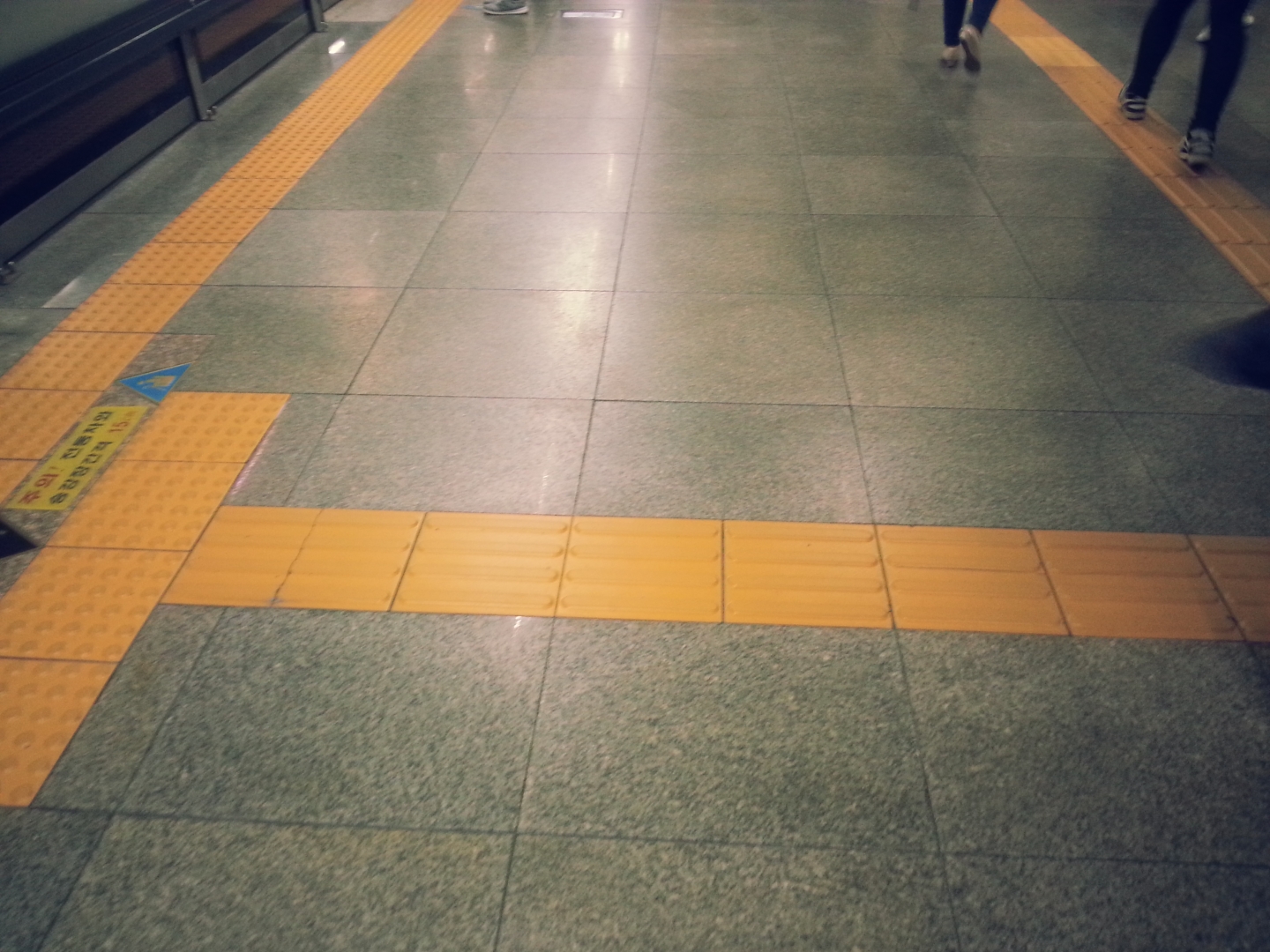 These yellow tiles aren’t there just for the aesthetics. You may have noticed them all around, but it might have not crossed your mind that these are actually for the visually impaired to use as a reference. (There was a scene in a thriller movie once where the killer comes after the heroine, who is blind, in an empty subway station. She manages to escape by feeling her way through these yellow tiles! Pretty cool.) 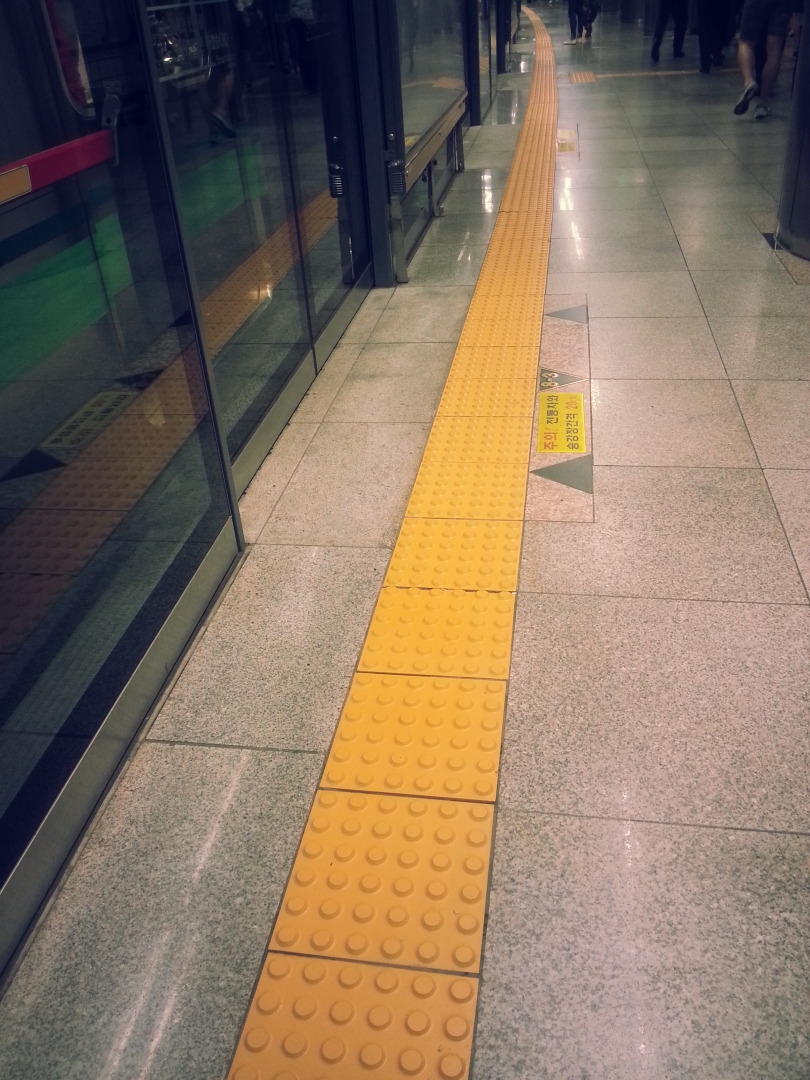 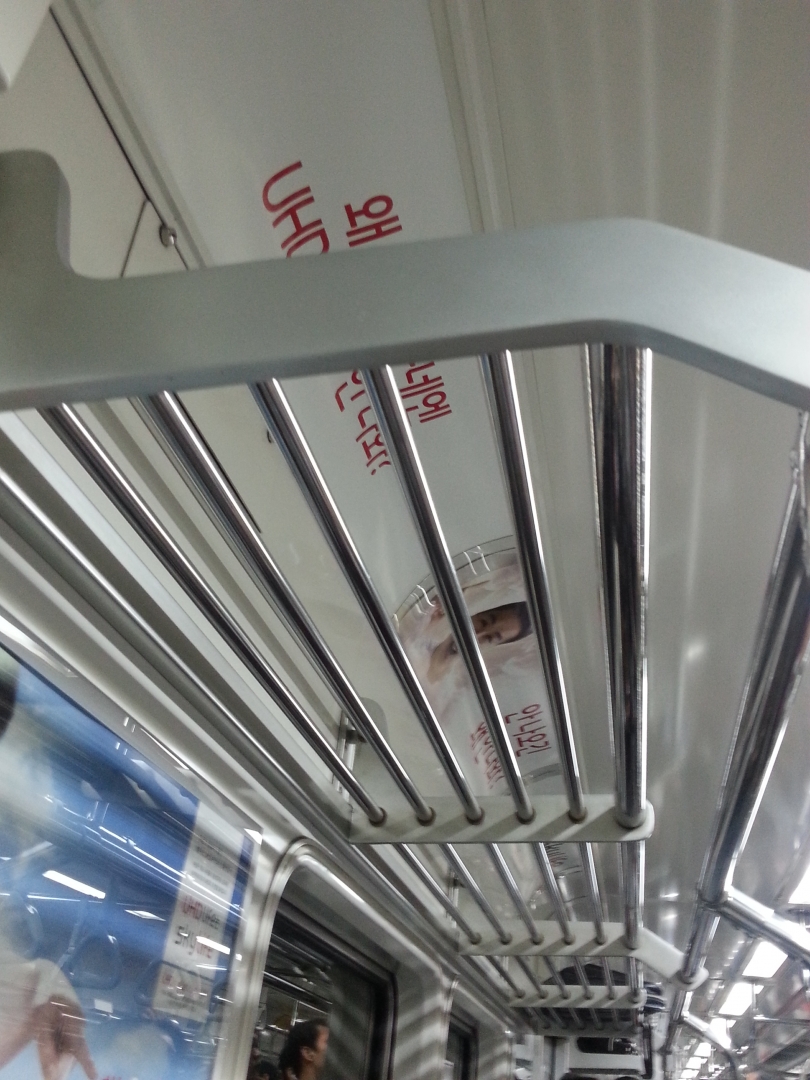 While most cars still seem to have the top shelf (for people to store things, mostly newspaper), a lot of the newer trains no longer have the feature. There are signs in these newer trains that kindly remind the passengers that there is no shelf in the car, but it can be easy to just assume there is a shelf there once you get in the routine, and this leads to a world of unfortunate events. There have been reported cases of people putting wet umbrellas and coffee cups up on the shelves, which, whether the shelf is actually there or not, is bound to be disastrous.

5. Inner Circle and Outer Circle?!!
Things are pretty straight-forward when the subway line just goes straight from the first station to the last — you just need to make sure the next stop is in the right direction. Throw in the loops and the circles, and you are a hot mess. Settling your confusion once and for all: Inner circle means the train is going clockwise, and outer circle means it’s going counter-clockwise — pretty handy when it comes to the more complicated lines such as line 2 — although, yes, it’s confusing regardless.

6. The Importance of Being a Proper Transfer-er
Whether it’s the bus or the subway, it is very important to tag your card when you leave as well. If you don’t, you will either not be able to transfer correctly and end up paying the full cost again, or there will be a penalty cost that gets taken out regardless. The window for transfers is 30 minutes, with some late-night ones being an hour. As a general rule, you will only be able to transfer if there is money left on your card, and paying with cash does not only make a transfer impossible, but it is also usually about 100won more expensive.

7. Give Me My AC
If you’ve been looking forward to getting on the train with hopes of getting cooled off by the usually extremely well operated AC, make sure you are well-aware of your surroundings first. There are weak-AC cars on every train, for those who don’t need the super strong AC. 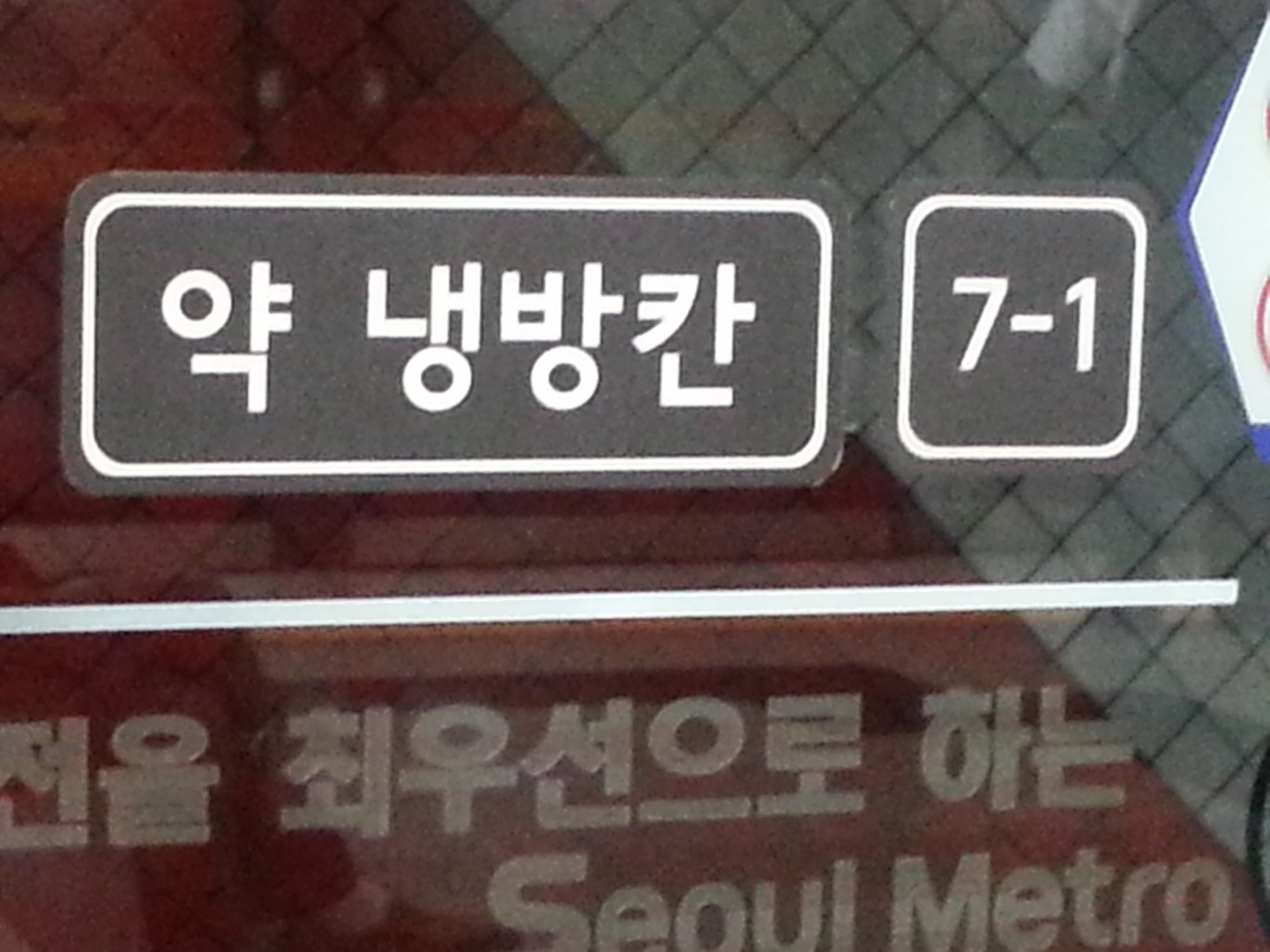 8. The Vending Machine Revolution
These are probably one of the best things ever, but they will usually take only coins and 1000wons. 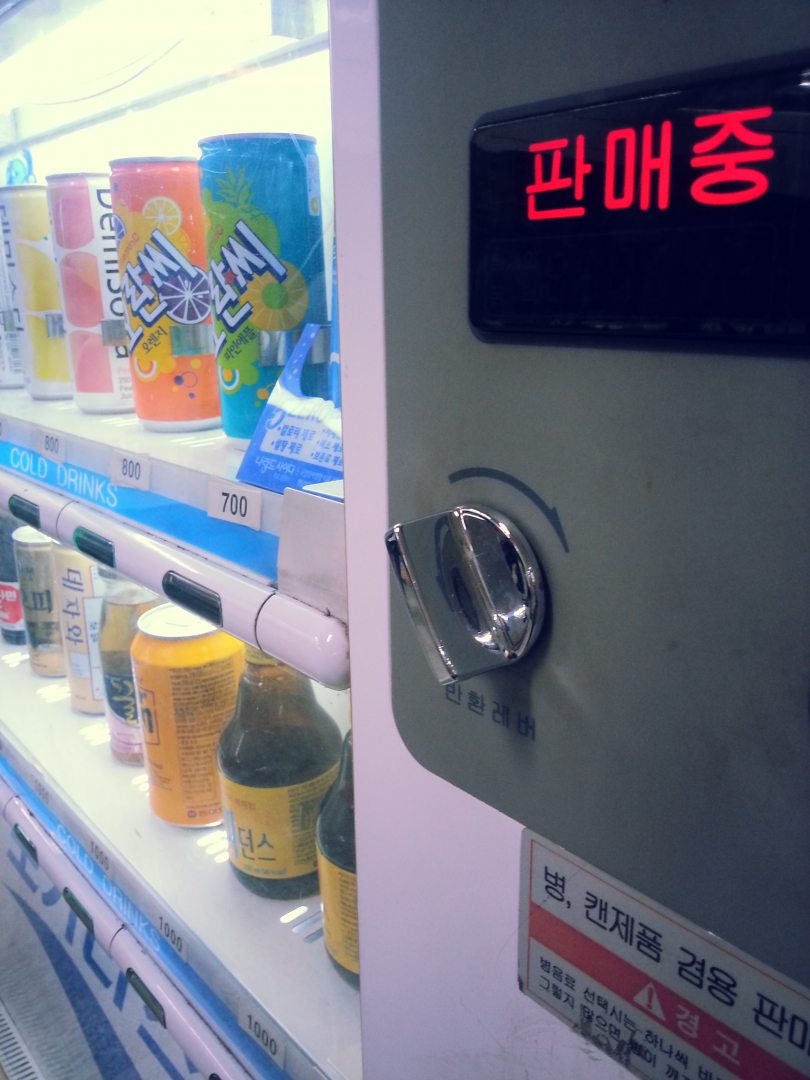 Did you know that there are new banana vending machines now at some of the more central stations such as Hongdae? Fancy, packaged bananas! It was startling to see Starbucks selling packaged bananas, but this is even more flabbergasting.

9. The Culture
The Korean Subway seems to have a culture of its own. There are annual art competitions (with pretty handsome prizes!) and poetry events held at the Seoul Metro Art Museum in Gyeongbokgung station, line 3. The Seoul subway is said to carry about 7 million people every day, so it might be good for you to learn to cherish it and learn about the things that make it special.

10. General Subway Decorum
Obviously there are designated seats for the elderly in each car, but it is considered general courtesy in Korea to offer seats for the elderly. In other countries, such as Thailand, it may be the opposite where the younger people are given priority, but in Korea it is mostly accepted as the thing to do when an elderly passenger walks in to offer them the seat. So move! If anything, it’s a nice thing to do.