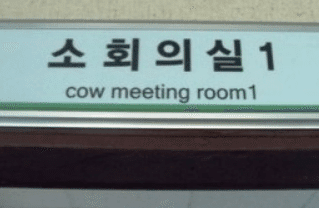 “When I see your face, there’s not a thing that I would change, ‘cause you’re amazing, just the way you are” —
Walking by one of the crowded university districts one day, I heard one of the street performers singing this song. When he was just about to sing those lyrics, instead of saying “there’s not a thing,” he sang something that was more like, “there’s a lot of things“.

The difference of a single consonant! Funny English errors can be found in abundance in Korea, and while they usually can be great sources of laughter, they can also cause a lot of confusion and misunderstanding. Here are some of those English moments we all know too well.

1.1 “Eating at restaurants abroad is fraught with danger . . . Oh this, this is a special brunch for the weekend. I might have the fresh salad followed by – a variety of opinions.” (Graham Norton, from The Graham Norton Show).

Now that’s just lazy.
(For your information, yook-hwe is tender beef that is lightly sauced — quite the delicacy. It just happens to be that yook also translates as six, and hwe can also mean times. )

Hey, at least they tried.
(This is referring to a Korean saying that is used to express and emphasize that something is extremely delicious. Say, you’re eating with your friend and he suddenly dies for some reason, and you don’t even realize it because the food is that delicious).

It’s very rare for a k-pop song to not have English lyrics, and while it can be cool if it is done well, things can also get pretty ridiculous.

Monday, Tuesday, Wednesday, Thursday,.. and they do it twice! Let’s just start listing the entire alphabet, shall we?

I would love a look inside this room.

4. And finally, this no-brainer

(Alright, well, this isn’t exactly faulty, but still there probably are better ways to put it. Imagine – the emergency alarm has gone off, and you’re frantically looking at these directions. Which one would you go with?!)