Tap into Your Inner Hamster at Big Ball Land

For those not familiar with zorbing, it’s essentially a human size hamster ball. It’s a 1.8 meter orb inside a 2.5 meter one. People are strapped in and rolled down a hill. Brothers Victor and Taekun opened the business in 2014. 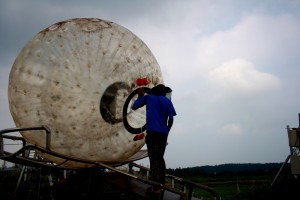 According to the owners Big Ball land is the only zorbing course with a curve in Korea. Two course are offered, one traditional zorbing where two people are strapped in one of the enormous balls and released. The thrilling ride last for just under a minute.

The other option is the amazing aqua ball where the ball is partially filled with chilled water. Unlike the traditional zorbing ball, visitors are not strapped in and up to three people can fit in. The fun filled experience will cost between 25,000-30,000 won depending on the course. 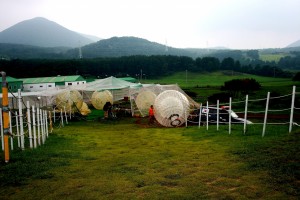 Big ball land is open four months out of the year from April to August as zorbing is a seasonal activity. They open as early as 9:30 am and close at 6:00 pm Monday-Sunday. To get there hop on the 780 bus leaving the Jeju intercity bus terminal headed for Jungmun. For more information call 1588-6418 or log onto www.jejuprimeleisure.co.kr (Korean only)