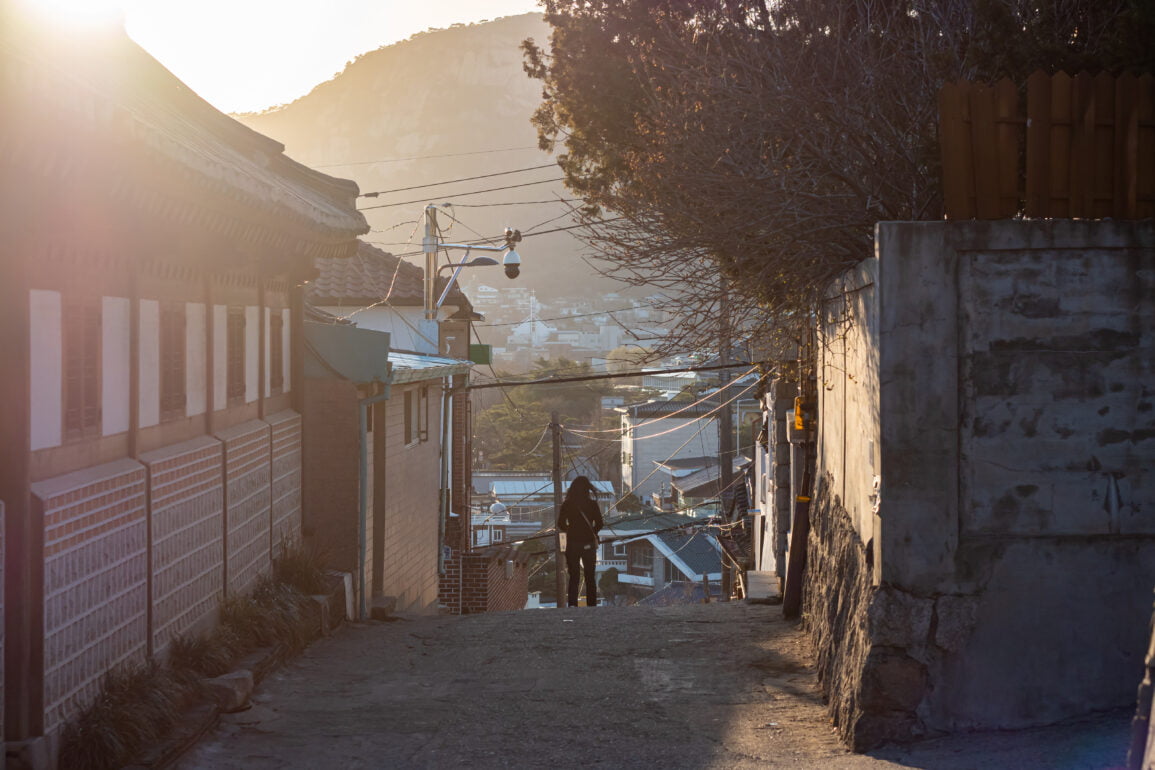 Where to walk? The walking trails in Seoul’s Namsan and Cheonggyecheon are the obvious spots, but plenty of options abound. Seoul delivers wide sidewalks, interesting alleys, and green space. Plus, Family Mart is always around the corner offering hand warmers, coffee, or tall boys of Hite D. Factor in the world’s best subway system that can take you home no matter how far you wander, and you’ve got an awesome city for taking a stroll.

Sure, it’s getting colder by the day, but that’s no reason to stay home and hibernate. Bundle up and take to the streets! You haven’t really seen the Han River until you’ve seen it frozen solid. Paths along the streams are particularly rewarding since the city keeps the path clear of snow and ice.

If you need some tips on where to direct your steps, here are a few of my favorites.

This is a largely downhill trip. After lunch in the ‘Twon, walk east to the first intersection after Rocky Mountain Tavern and turn right. This little road snakes its way down the hill to central Hannam. At the major intersection under the underpass, turn right and walk toward the Hannam Bridge, which crosses the Han.

I like this bridge for its lion sculptures and its views of the more attractive Banpo and Dongho bridges. A major interchange awaits south of the river, but a crossing signal will help you out. Once on the street on to which you “exited,” turn left and go under the bridge. Continue east, and Apgu will soon rear its surgically-altered head.

Start at Hansung University Station on Line 4. Go out exit 6 and turn right. Soon, you’ll find yourself in Seongbuk-dong, one of Seoul’s most scenic neighborhoods. Continue uphill: things get steeper here. Before long, you’ll be in Bugaksan Park overlooking downtown. A twisty downhill road leads to Bukchon-dong, Seoul’s Hanok village.

Go west and land in tony Samcheong-dong, where it becomes obvious that the North Side is still the real rich part of town. Keep going south to impressive Sejong Road, follow it through City Hall Plaza and on to Namdaemun gate. From here, veer left, then left again at the next fork and walk along the southern slope of Namsan. From here it’s easy to finish your trip in HBC (Haebangchon) or Itaewon, or at the Grand Hyatt if you’re a baller.

Start in the burbs, Bundang south of Seoul. From Jeongja, Sunae, or Seohyun stations, the Tancheon is a quick jump to the east. At the river, start walking north. Just keep going. Corner stores are far less frequent, as are public transit exit plans, so gear up. The Tancheon goes from suburbia to rural, passes Seoul Airfield where military aircraft often run drills, cuts through southern Songpa-gu, and finally ends in Samseong-dong. Coex Mall makes for a great place to warm up.

What are some other great walking trails in Seoul to go on in winter? Let us know in the comments!

If you’re interested in trying something more challenging than walking, have a look at our list of 19 Breathtaking Hikes Into The Korean Mountains.