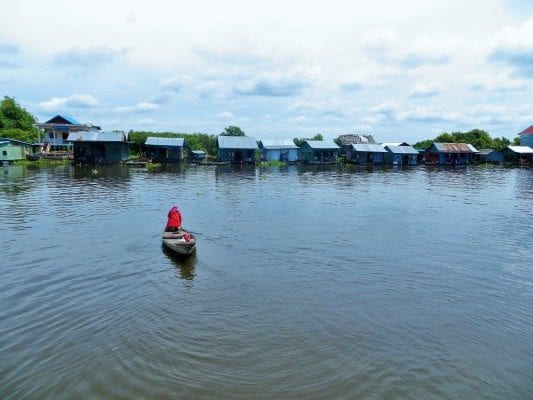 Magnificent and unusual, Tonlé Sap, the largest freshwater lake in Southeast Asia, is literally the flowing heart of Cambodia. Fish gathered from Tonlé Sap are the primary source of sustenance for the majority of Cambodia. It is estimated that Cambodians receive seventy percent of their protein from this critical resource. The Cambodian bond with fish runs so deep that their currency, the riel, is named after the small silver carp that is the staple of many diets. What truly makes Tonlé Sap unusual, however, is its tumescent hydrology and the adaptations implemented by the numerous stilted and floating communities bobbing across its murky expanse.

Hydraulically, Tonlé Sap is a combined lake and river system that annually reverses flow. From roughly November through May, Tonlé Sap calmly flows into the Mekong River beside downtown Phnom Penh. During the rainy season, however, the turbid waters of the Mekong River rise to overwhelm the outflow of Tonlé Sap, thereby reversing flow into the lake. This results in a dramatic multiplication of lake size: from an area of 2,700 square kilometers, one meter deep, swelling to 16,000 square kilometers with a depth of up to nine meters. The vast nutrients provided from this annual ebb support an ecosystem so rich and diverse that it is officially recognized as a Biosphere Reserve by UNESCO. 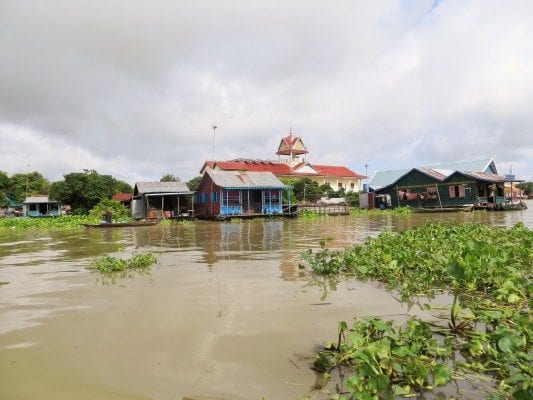 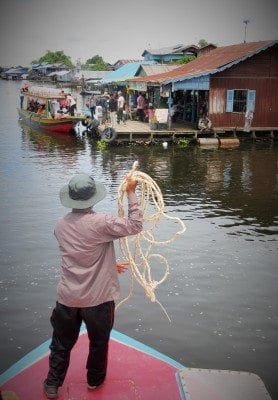 The many communities that have adapted to living within the migrating margins of the lake are likewise distinctive. Some feature structures floating on stilts, allowing them to rise and fall in place with the water. Other villages are bobbing transients, annually migrating kilometers between advantageous wet and dry season locales within Tonlé Sap. In these buoyant metropolises, every conceivable necessity – schools, churches, pig pens, karaoke halls – is adapted to float atop this aqueous landscape. Naturally, fishing is the main source of income for a majority of those living upon Tonlé Sap. A large proportion of fishermen are actually migrant Vietnamese, creating a cultural hodgepodge within Tonlé Sap.

Like many of the world’s natural treasures, however, the fate of Tonlé Sap is uncertain. A variety of impacts including overfishing, overpopulation, climate change, deforestation, and the planned construction of over 100 dams throughout the Mekong watershed are already negatively impacting the fragile environment. Ensuring the continued health of one of the most productive freshwater ecosystems in the world will require scientific-led collaboration and compromise between its inhabitants, its fishermen, the Cambodian government, and other Mekong River nations.

Numerous tours to visit portions of Tonlé Sap are offered in the nearby tourist hub of Siem Reap. During rainy season, however, an alternate, more incognito means to observe the lake and its inhabitants is via what passes for local public transportation. Join the natives and board one of the motorized sampan long boats that transport them and their wares between the numerous Tonlé Sap enclaves. Travelling from Siem Reap to Battambang is one popular option. Be sure to stock up on food and water beforehand, as there is none to be found on the boat, and languidly plying the vast Tonlé Sap will take the majority of a day. 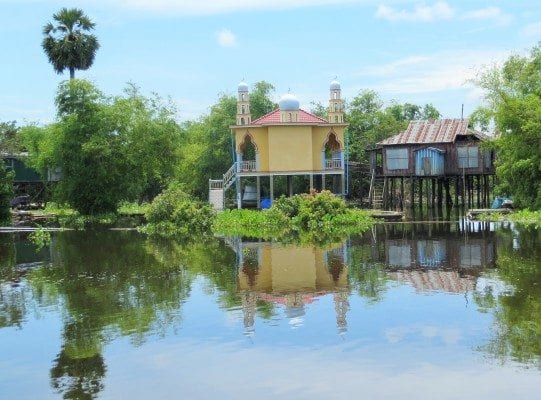 An alternative for those who feel uncomfortable embarking unguided on what could be a cramped, 12-hour journey on a boat incapable of passing the bare minimum of safety standards, is to consider responsible tourism options. Agencies which practice responsible tourism minimize negative social, economic, and environmental impacts of their tours while ensuring that some of the positive benefits of tourism, such as increased revenue and employment opportunities, are passed back to the local communities they visit. It is important to conduct some research to ensure that you do not end up on any of the overpriced tourist trap voyages which are better described as souvenir shopping tours rather than cultural tours. To prevent this, avoid tours that only include Chon Khneas, the village nearest to Siem Reap. Instead choose a tour that visits some of the more far-flung Tonlé Sap communities. You will enjoy a much more rewarding experience.

A perusal of the Internet indicates there are numerous tour companies that practice responsible tourism offering Tonlé Sap tours. These companies include; See Cambodia Differently, Beyond Unique Escapes, Osmose, Terre Cambodge, and Tara Riverboat. This author can’t personally vouch for the quality of any of these tours, so I encourage you to do your own research and determine what is best for you. Enjoy the journey!