The Swell Season Live in Seoul

The Swell Season Live in Seoul 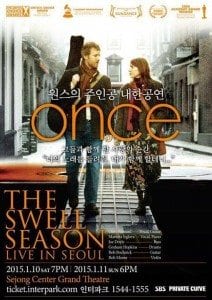 Irglova will be performing together under the banner of “The Swell Season.” Made famous by their roles in the film “Once,” Hansard and Irglova referred to themselves as “The Swell Season” to promote their roles in the film until the name stuck. While the film was released in 2007, the soundtrack is still widely popular with a stage production of the feature currently making its way around Korea. They’ve released two albums, “The Swell Season” and “Strict Joy,” with another album supposedly on the way. For any fans of the film, musical, or of soft rock with folk rock tones gently infused in, this concert promises something beautiful.