The Most Relaxing Competition You Could Ever Do 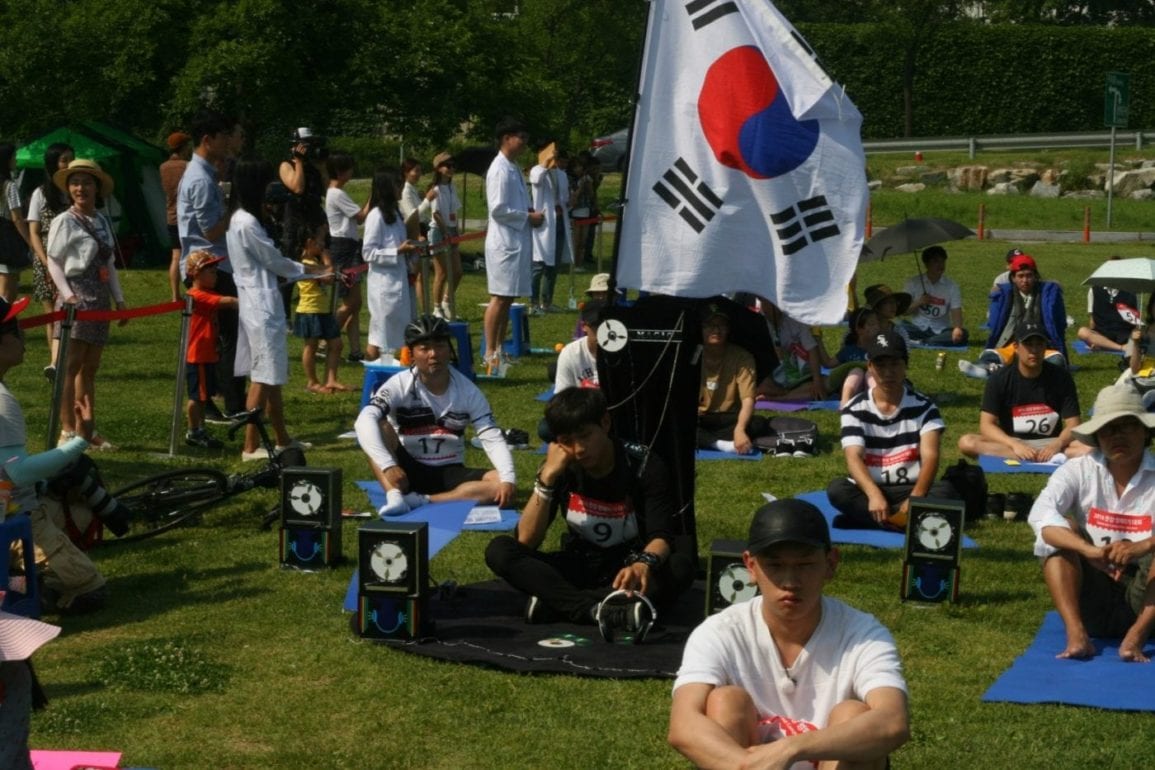 The third annual Space-Out Competition (멍때리기 대회) was held on Sunday, May 22 at the Ichon Han River Park in Yongsan-gu. More than 1500 people registered to compete, but spots were limited to 70 competitors. 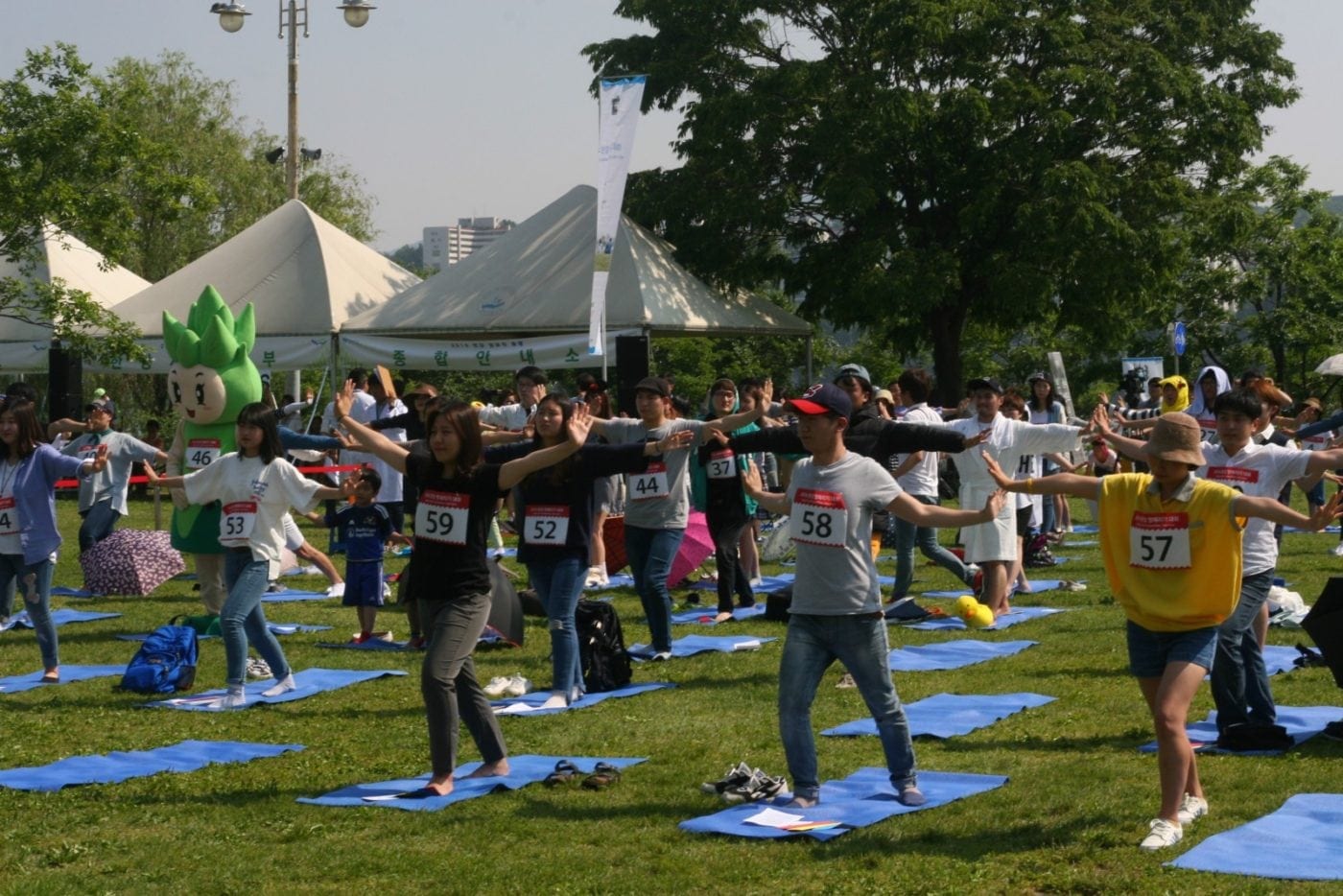 “Mongddaerida” in Korean means to space out or daydream, with eyes glazed, oblivious to the world.  The first competition was held in 2014 and was organized by the Korean performance artist WoopsYang (웁쓰양), pictured below. The competition aims to encourage total absence of mind, allowing brains stressed by too much work or screen usage to relax. 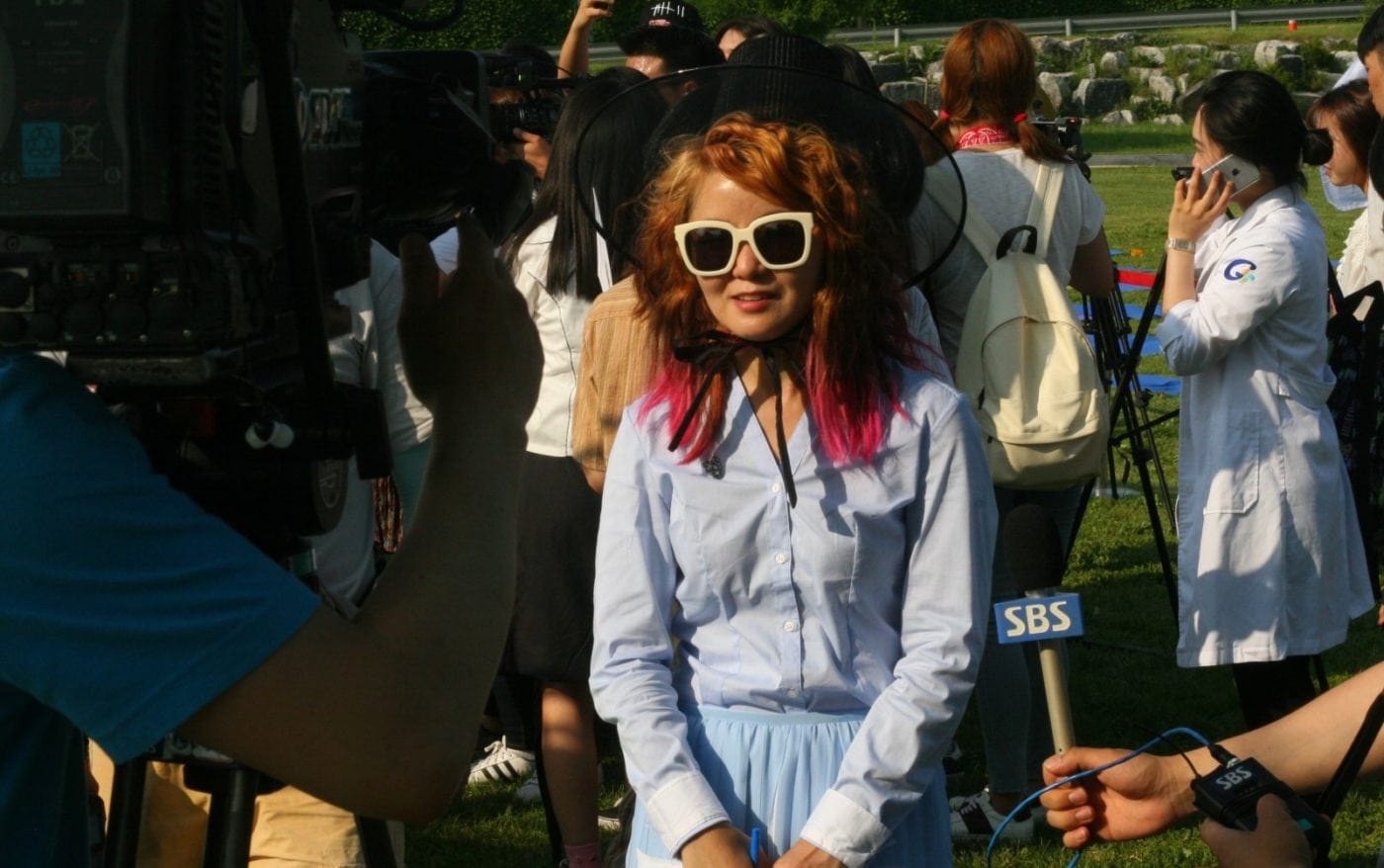 “The real value of spacing out is the ability to empty yourself,” said the artist in an emailed statement. “When I first organized this competition, my intention was to show a group doing nothing in the middle of a busy city. My goal was to make a visual comparison with a busy group and a group doing nothing. I think this shows the value of spacing out.” The competitive aspect makes spacing out a goal-orientated activity, she said, which removes the negative social connotations of daydreaming as a waste of time. 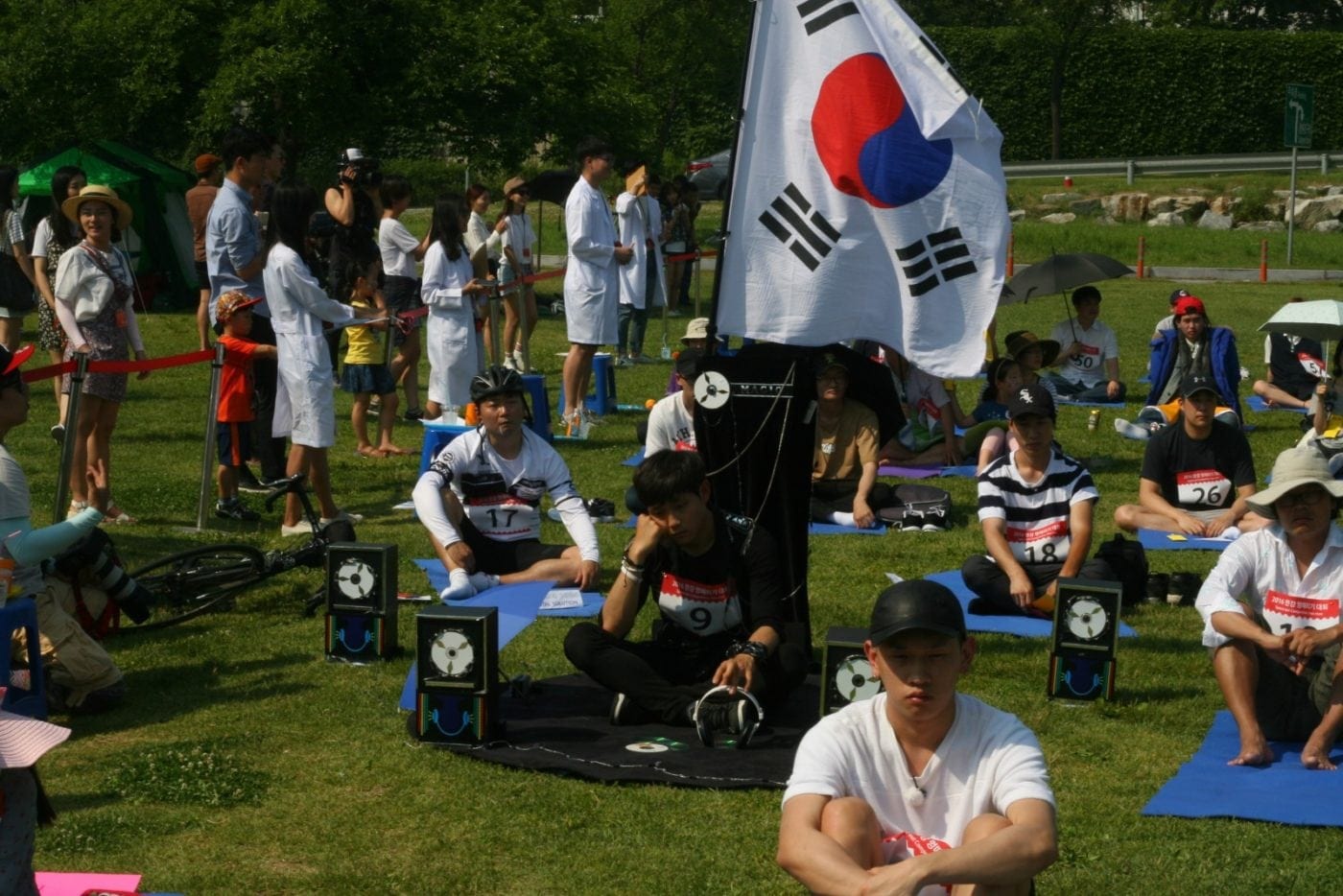 A space-out competition was also held in Suwon earlier in May, and in Beijing in 2015.  The rules of the competition are simple: space out for as long as possible. ‘Doctors’ assisted the artist and organizers by checking heart rates to ensure competitors were suitably relaxed. Competitors were prohibited from talking, laughing, sleeping, eating, and checking their watches or cellphones, and some were removed from the competition on Sunday for breaking these rules. Competitors were also encouraged to dress in the attire of their profession.

When the contest ended, many participants appeared reluctant to return to the real world. “I was thinking about nothing,” said Casey Kadlik, 28, a middle-school teacher from Boston who lives in Daejeon and traveled to Seoul in order to compete in the event. “I didn’t really want to stop.”

The winners were judged via ‘citizen vote’ and by heart rate level. On Sunday the competition was fierce, with heavy levels of space-out apparent despite 30°C weather. First prize went to Shin Hyo-Seob, better known as the rapper and singer Crush (below) who said he had been working too hard on an album and needed to relax. 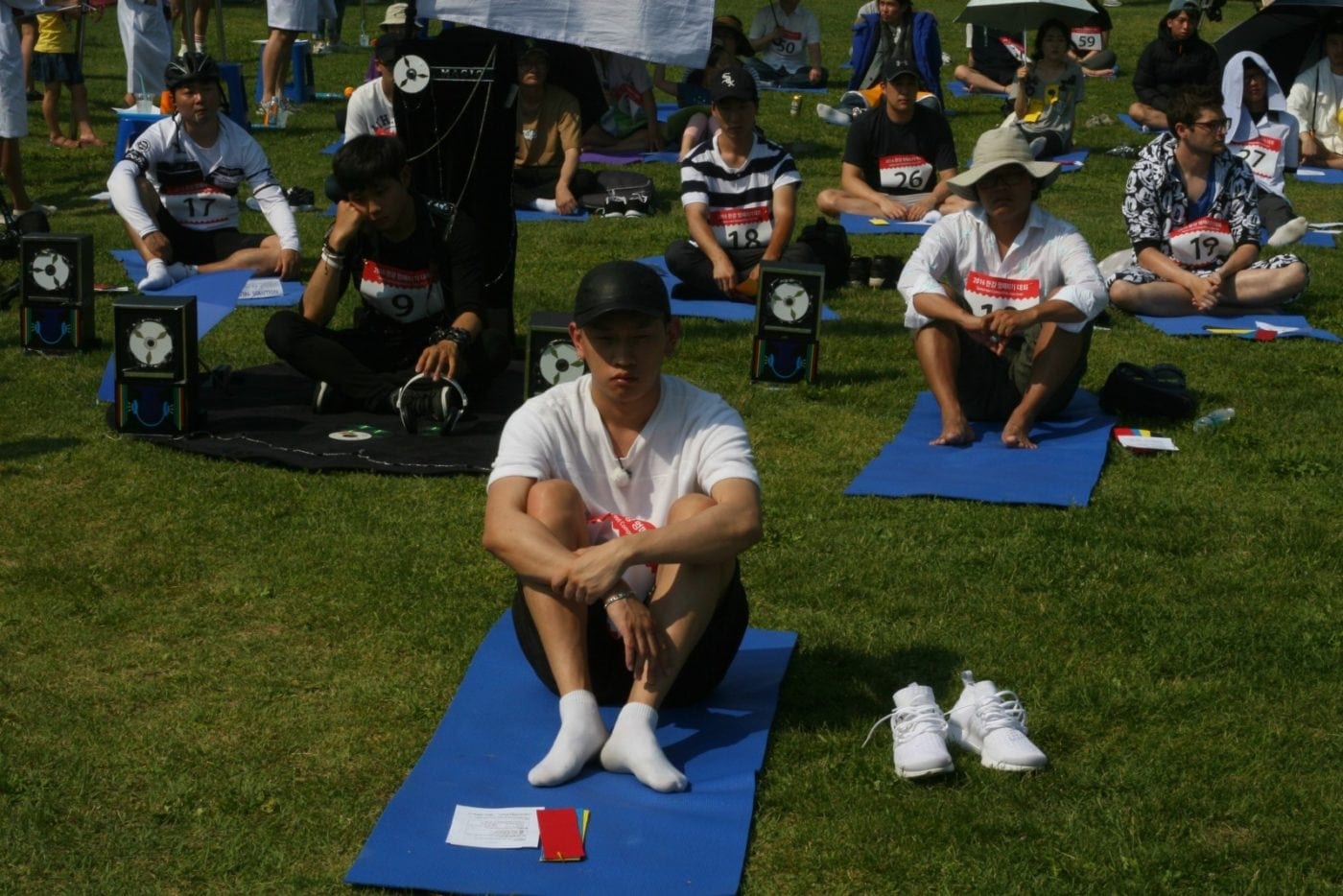 “I’d like to hold the competition every year,” said WoopsYang. “If I have more chances, I’d like to meet people who need to space out in other countries…. [After the first competition] I could feel that the value of spacing out was changing to a positive conception. Afterwards, people don’t regard spacing out as time-consuming anymore.” 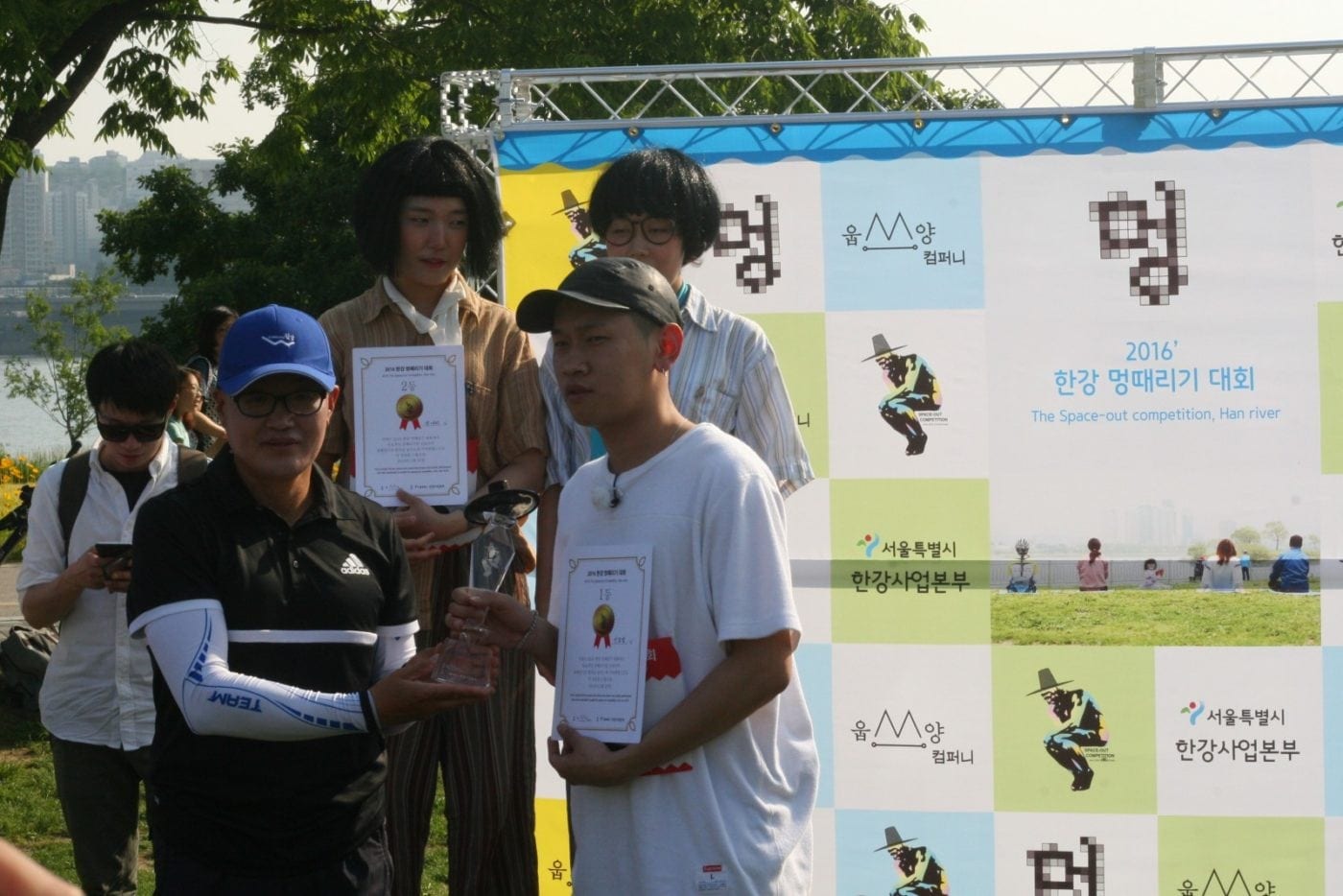