Words and shots by Aaron Brown

The northwest satellite of Seoul is known as the New City or Garden City to most. But since new things become old before you know it, and because the area is developing at an exponential rate with less garden left to enjoy, I often focus my thoughts of Ilsan on an experience dear to my heart (and stomach) great food. Ilsan has quite a diverse selection of amazing eateries. Conveniently, you can find traditional Korean dishes galore down just about any street, as well as a wide selection of foreign restaurants including Japanese, Chinese, Thai, and Indian as well as western sit-downs like Outback, Bennigan’s, and Pizza Hut.

Ilsan is the more popular brother of the two districts in Go-yang, northwest of Seoul, leaving the lesser known Deogyang as a sort of Casey Affleck to Ben Affleck or Luigi to Mario. You can get to Ilsan by getting on subway line 3 (the orange one) and going to the Northwestern end or by riding one of the red 1000 or 2000 buses. The district stretches from Daehwa Stn. (310) to Jichuk Stn. (319) and is roughly a 45-minute trip from downtown Seoul. Ilsan offers all the amenities of a metropolis like Seoul food, shopping, nightlife, recreation, and a fast-growing expat community but with a fraction of the population and pollution. The subway guide below will give first-time visitors a quick intro to points of interest in the area.

Juyeop Stn.
Miller Time This hof serves up delicious spicy short ribs, tater tots, and fried chicken, as well as Miller beers. Head out of exit. 8, go left at the first street, right at the next street and it’s in the middle of the block on the left.
Zeppelin’s Mr. Kim serves up an awesome selection of songs on vinyl, foreign beers, cocktails, and yummy roasted nuts in this 10-seat LP bar. From ex. 4, walk straight, cross the major intersection, and it’s a short walk ahead on the left. Look for the giant ajumma in the fur coat advertisement.

Jeongbalsan Stn.
LaFesta Shopping Mall A huge indoor/outdoor shopping area. From exit. 2, cross the street towards Lotte and walk left past the Burger King toward the McDonalds. Everything is on the right. Bar Boom and Frog and Toad are two excellent expat bars to check out. Heaven is another great LP bar on the street corner across from the Baskin Robbins and STCO. The owner, Andy, is an awesome guy.

Lake Park Located next to the KINTEX convention center, this is probably the biggest draw to Ilsan. It’s a huge man-made lake with tons of exercise and recreation areas for the family, as well as botanical gardens and a really cool musical fountain during the nicer months. From exit. 2, don’t cross the street but instead head left past LaFesta over the bridge and you’ll end up inside the park. It’s a big place to explore, but it makes for a great Sunday afternoon. 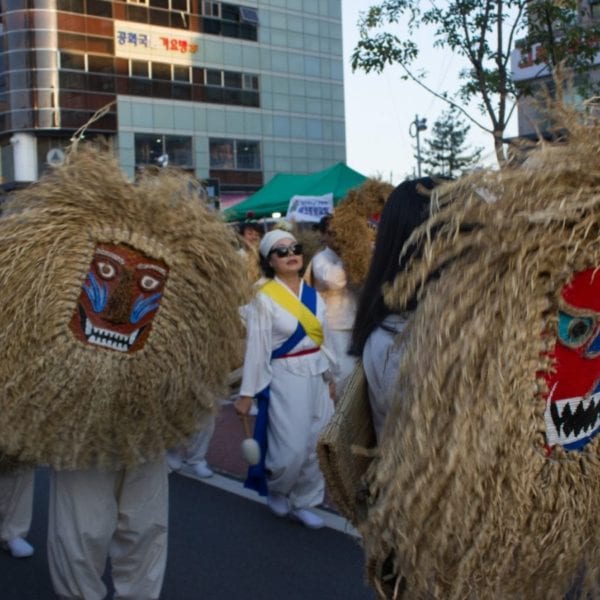 Western Dom Another huge mall, just opposite LaFesta, with CGV Imax theater, overpriced cameras and electronics at PixDix, and Chicago-style deep-dish pizza at Unoâ€™s. Check out the Cubs baseball display with a White Sox jersey inside for an only-in-Korea laugh.

There’s much more in Ilsan than this article can encompass, everything from bowling alleys, health clubs, bookstores, and street vendors to exhibition centers, art theaters, and churches and temples. There are mountains to climb and trails to hike. If you’re a photographer, you have easy access to both urban and rural areas. Although it may not be all that new anymore, nor have quite as much greenery, Ilsan does have everything a guy from Chicago needs in order to feel a little closer to home.