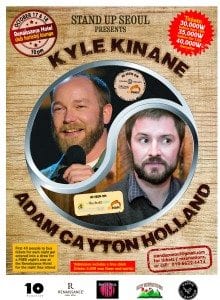 Another HUGE show is here, brought to you by Stand Up Seoul! On October 17th (Fri.) and 18th (Sat.), Stand Up Seoul presents the return of comedy juggernaut Kyle Kinane, along with his good friend, writer and comedic sensation, Adam Cayton-Holland. In case you’ve been living in a cultural cave, here is a little bit about them:

KYLE KINANE: His debut album Death of the Party, released in 2010 on AST Records, has won critical acclaim. Kinane was also named in Variety’s “Ten Comics to Watch in 2010” He has performed his stand-up on television programs Last Call with Carson Daly, David Letterman, Live at Gotham and Conan. His last Stand Up special on Comedy Central was listed as the #2 comedy album last year by the Onion’s A.V. Club. Kinane is set to appear in the pilot episode of the upcoming animated Comedy Central series, Triptank, along with other comedic greats Larry David, Bob Odenkirk, Bret Gelman and Zach Galifianakis. He is currently “the voice” of Comedy Central and also appeared as a drunken narrator in the first season of cult show, Drunk History.

ADAM CAYTON-HOLLAND: He was included in Esquire’s 25 Best New Stand-Up Comedians in 2012. That same year he was invited to the prestigious New Faces competition at Montreal’s Just for Laughs Comedy Festival, appeared on the Nerdist podcast, and had a cameo on the ABC show Happy Endings. After making his national television stand-up debut on Conan in 2013, he appeared on The Pete Holmes Show in February 2014. He quickly followed that appearance with a repeat trip to South by Southwest where he was featured on the Comedy Bang! Bang! podcast and competed on @midnight against Baron Vaughn and Rove McManus. His writing has appeared in Spin (magazine) and The Onion’s The AV Club. He has released two acclaimed albums, Dick Jokes for Artists (2009) and, I Don’t Know If I Happy (2013).

Both shows (Oct 17th and 18th) will at the stunning, Renaissance Hotel Club Horizon (23rd floor, overlooking Seoul) in the Gangnam-gu, Yeoksam area (very close to the station).
marriott.com/hotels/hotel-information/travel/selrn-renaissance-seoul-hotel/.
The show will start promptly at 10 pm.

THE FIRST 40 PEOPLE TO BUY TICKETS WILL BE ENTERED INTO A DRAW TO WIN A FREE NIGHT’S STAY AT THE RENAISSANCE HOTEL (300,000 won value).

The evolution of expat entertainment continues. Support live stand up comedy in Seoul. This show will also feature some local opening acts from Stand Up Seoul.

These shows will SELL OUT. GET YOUR TICKETS NOW!

And Thank you to our sponsors: 10 Magazine, The Renaissance Seoul Hotel, and Magpie Brewery

HOW TO GET TICKETS

Tickets By Phone:
1. Will be reserved for 48 hours, pending bank transfer (see below).
2. Upon bank transfer completion, send a text message to 010-6622-4474 with your name, email, bank used, and time of transfer.
3. A confirmation email will be sent later that day.

To get tickets via email:
Send email to standupseoul@gmail.com and include:
1. NUMBER OF TICKETS
2. YOUR NAME FIRST and LAST
3. Names FIRST and LAST of all other people you are getting tix for.
**At event, names not on list will not receive entry at door. This is done to make entering as convenient as possible for groups who may show up at diff times.
4. WHICH SHOW DATE (Friday Oct. 17th or Sat Oct. 18th)
5. (If possible) BANK NAME and ACCT NO. that payment will be sent from

**To pay for tickets:
MAKE SURE YOU HAVE CONTACTED US FIRST!
Woori Bank
1002-743-808654
Please only leave your NAME when/if asked about “note printed on receivers bank book.” Tickets are first come first serve, so it is wise to pay ASAP. Tickets are NOT confirmed until payment is made. Once we have matched payment with your name, you will get a confirmation email.