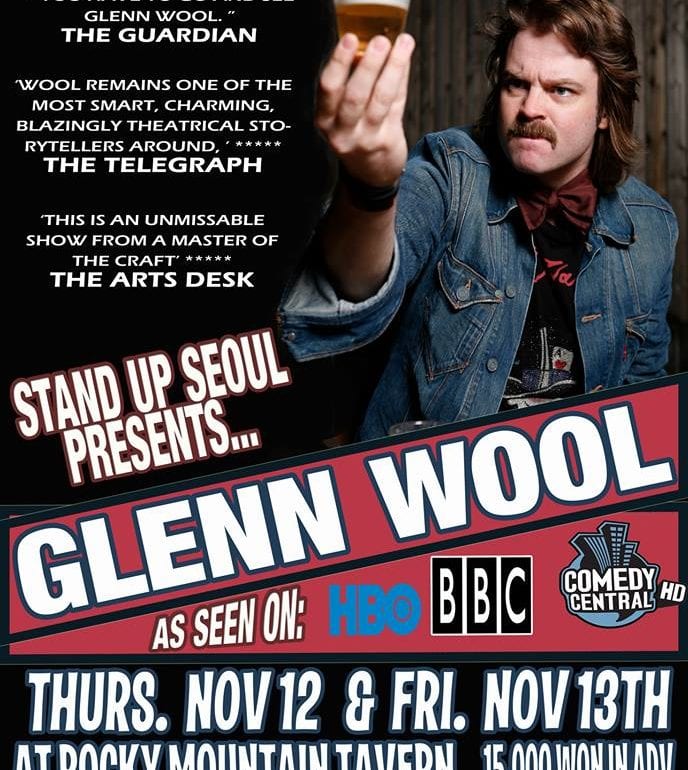 Stand Up Seoul is returning yet another renowned and hilarious professional stand up comedian to the stage in Korea …Glenn Wool! After performing in Seoul back in February 2013, Glenn is here again for another amazing week of shows. Start the winter off right with this globe trekker’s worldly brand of stand up comedy.

Glenn’s show has attracted high praise from high places, with The Guardian calling Glenn,  “Effortlessly funny with an affability that other comics can only dream of – You have to go and see Glenn Wool.”

The Telegraph said, “Wool remains one of the most smart, charming, blazingly theatrical storytellers around.”

And Kate Copstick of The Scotsman declared Glenn, “One of the best hours of comedy I have ever seen.”

Hailing from Canada and now based in theUK, Glenn is a regular on TV, stacking up an impressive resume that includes appearances on Russell Howard’s Good News, Never Mind The Buzzcocks, The BBC Stand Up Show, The Live Floor Show, 28 Acts in 28 Minutes, and The Comic side of Seven Days for the BBC. Glenn also wrote and starred in What’s The Story? broadcast on Channel 4 as part of the Comedy Lab season.

Glenn is no stranger to radio either with recent appearances on Political Animal and 28 Acts in 28 Minutes for BBC Radio 4 as well as headlining 4 at the Store (R4) and The Late Night Comedy Show for Radio 1.

These shows will sell out, so get in quick!