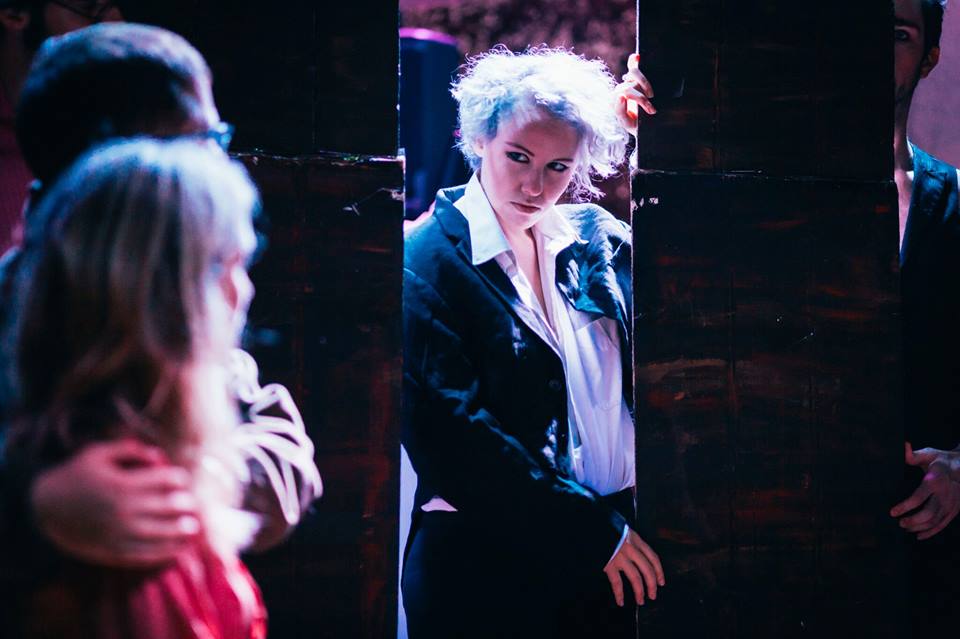 Ready to put on your Halloween costumes? Excited to grab candies and sweets?

One quarter of all the candy sold annually in the U.S. is purchased for Halloween. Surely, there is no doubt that Halloween is a big thing in America, but is it originally from America? The answer is No!

It originated from the Celts 2,000 years ago in today’s Ireland, the United Kingdom and northern France. The Celts greeted the new year on November 1st, but they threw the festival of Samhain on October 31st, the night before. They believed ghosts come back to the earth on the day between the end of harvest and the beginning of winter.

This Celts’ Halloween became well-known in America, as a number of people immigrated to the U.S. However, nothing contributed to popularizing Halloween as much as the Irish Potato Famine.

It seems like Irish people are talented at celebrating their culture internationally. Not just Halloween, but also Saint Patrick’s day is celebrated all over the world. Ireland may seem like a small island, but Irish people must be proud of their own culture. They know how to have fun, and Irish communities in Korea are not to be missed. Among them, the Irish Association of Korea (IAK) plays the key role in raising awareness of Ireland.

There will be a quiz night hosted by the Irish Association of Korea. Both Koreans and expats are welcome to enjoy the Halloween themed pub quiz.

Not only Halloween related questions, but also different subjects will be covered on the night, so this will be a chance to brush up on your knowledge. All teams are capped at a maximum of 4 people, and the entrance fee is 20,000 won per team.

There will be cash prizes and spot prizes throughout the night. The person wearing the best costume will win a prize as well, but if it feels frightful, you do not need to worry about costumes. It is all about having a joyful time, so don’t be stressed about quiz scores. For Irish people, this event will help them beat homesickness, and others can learn about Irish culture and make Irish friends. 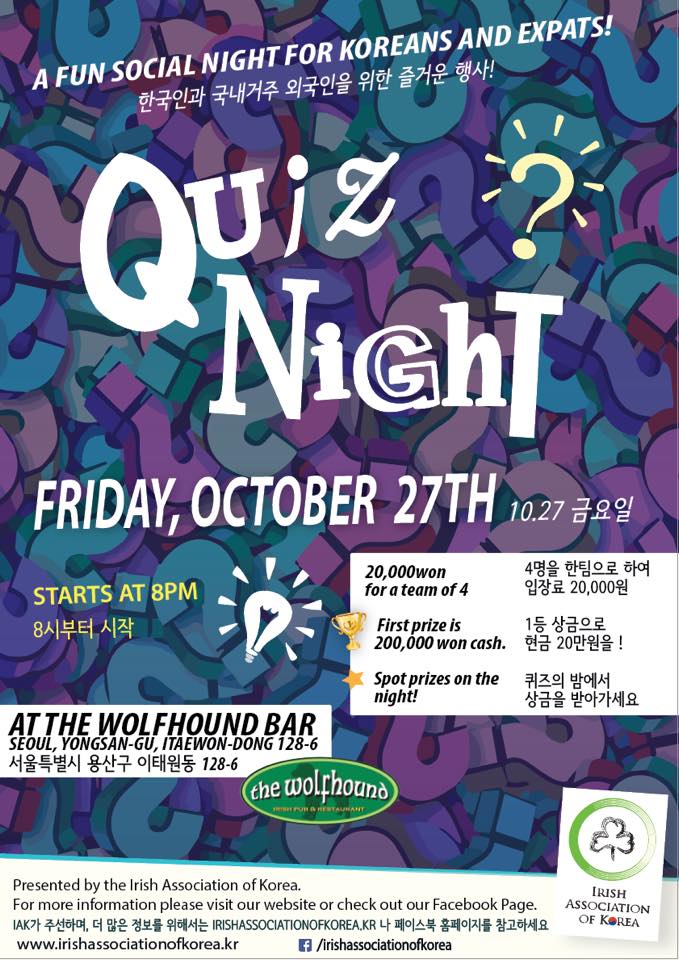 If you’re looking for a scary Halloween plus a whole new experience, this will work for you. Standing on stage with no script! What could be scarier than that?

Playing games, singing and creating unbelievable scenes, actors on the stage will present to you a completely unique world filled with unexpectedness. While some actors strive to come up with ideas, stories and next scenes spontaneously, other actors’ unplanned and hilarious performances will make you laugh and blow your mind.

They say it’s BYOB or BYOF, so you can bring your own booze or friend. Their theater has a friendly and casual atmosphere, and the audience members are encouraged to participate in the performance. However, that does not mean the actors pull you up on stage, so there is no need to be nervous at all. Actually, being alive is kind of an improvisation, so there should be nothing to be scared. 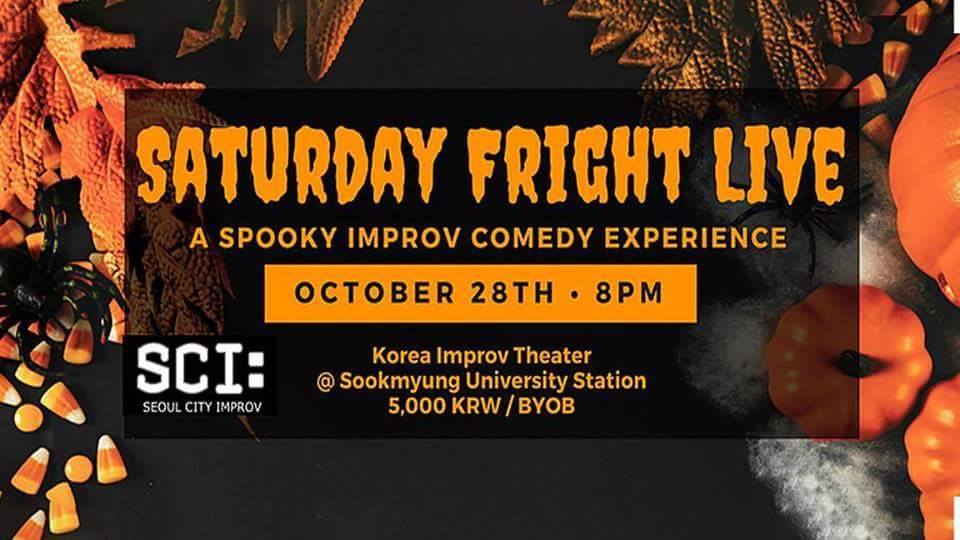 What is a traditional show for Halloween? There might be numerous answers, but it can not be wrong to pick “Rocky Horror Shadowcast.”

Seoul Players will present the annual Rocky Horror Shadowcast from Oct 27 to the 28 in celebration of Halloween. This is the 7th year it has been performed, but it is constantly enjoyed and loved by first comers and people who have already watched it.

A Shadowcast is where actors are on the stage and the film is played in the background. The actors pantomime and mimic the actions and words of the characters throughout the show. Rocky Horror is one of the most famous examples of this kind of performance in the world. People in the audience can also participate during the performances, yelling out phrases and slogans called “callbacks” during the show.

The Rocky Horror Picture Show has been shown at midnight in thousands of theaters all over the world, since its original debut in 1975. It has also become a Halloween staple in many countries, and for the past 7 years, Seoul Players has put on an annual Rocky Horror Shadowcast at venues all over Seoul. 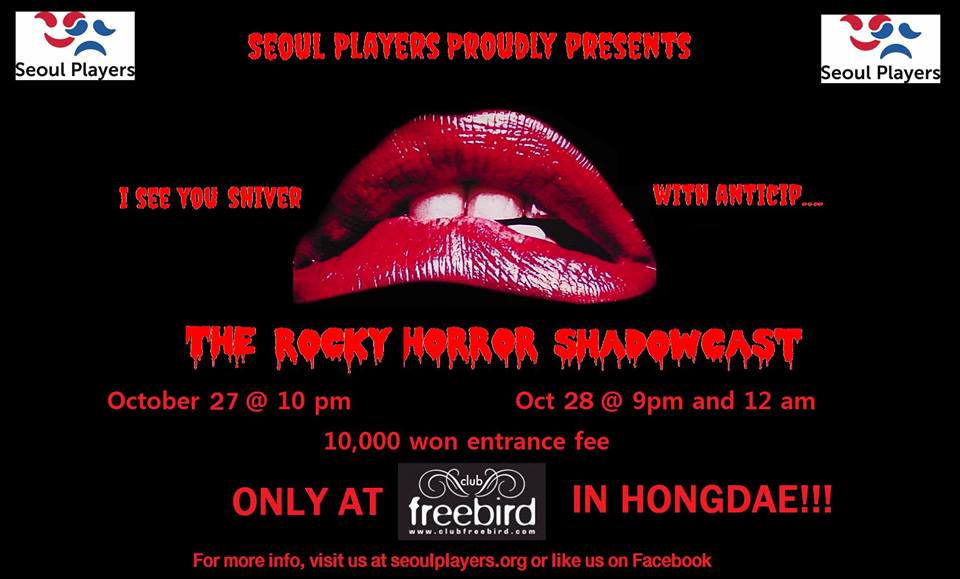 This year, it is directed by Makrenna Sterdan, produced by Chris Zaczek, and choreographed by Sydney Langford, and there will be a few other surprises as well. Plus, the burlesque group Starlight Productions will preview their upcoming Star Wars-themed show, “The Rule of Two,” which adds uniqueness to this year’s production.

As it is a mixture of horror, comedy, sexual liberation, science fiction, and craziness, the Rocky Horror appeals to a broad range of performers and audiences alike. By defying the society’s norm as well as accepting the sexual difference, the show encourages people to discover their potential.

The shows are held at Freebird in Hongdae and have 3 options to choose: 10 pm on Friday, Oct 27, and 9 pm and midnight on Saturday, Oct 28. It is always sold out, so it’s better to arrive early. Tickets are 10,000 won and are available at the door. Audience members are encouraged to come in costume and the best dresser will be given prizes.

Whether it’s to ward off the dead or to have a blast with ghosts, the point is to have fun, isn’t it? Dead or alive, no matter what, fully enjoy your time given to you on the earth! Halloween is the day to appreciate being alive instead of taking life for granted and to make the best of it!