Little Tokyo in the Heart of Seoul 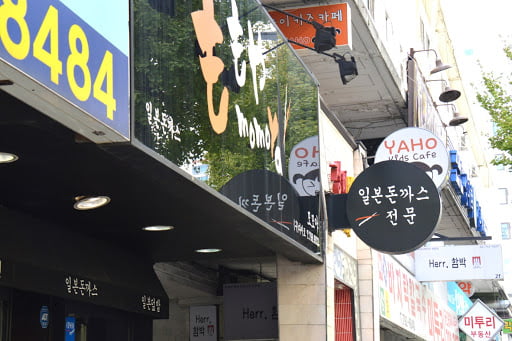 Seoul’s Little Tokyo is quiet and unassuming—and sinfully delicious if you know where to go.

Dead at the center of Seoul where the great Han makes its bend lies the Dragon Hill district, or Yongsan-gu, an area of rich diversity that’s home to the city’s best electronics market, its iconic Namsan Tower, Yongsan Garrison, the hip little pocket known as Haebangchon, Sookmyung Women’s University, Seoul Central Mosque—and Little Tokyo. Situated in East Ichon, or Dongbu Ichon, this quiet hood doesn’t appear to live up to its name at first and is in fact so small it’s easy to miss if you don’t know where to look. But then, that’s just part of what makes it so appealing.

The first time someone told me about Ichon, I was eager. After having lived in Japan for four years, I was excited at the prospect of having a place to go where I could buy bags of Niigata rice while keeping my Japanese fresh by talking to people on the street. So I went there on a Sunday and walked around the area where it was supposed to have been, but was sorely disappointed. Was this it? A few signs in Japanese and some over-priced apartments? I went back later, this time passing through with a friend who lived there. I didn’t stop to take much in, but then I didn’t see much that warranted being taken in. Thus, Ichon slipped to the back of my thoughts until last autumn when, on a whim, I took a long walk through Yongsan which found me in the middle of an alley in Dongbu Ichon trying to dodge the rain.

I stepped into a small noodle shop for shelter, my jacket pulled over my head, and was happy to hear the old refrain: Irasshaimase. Welcome. I tucked into a warm bowl of soba noodles as the rain outside poured down. I was so hungry I think I got halfway through my meal before it dawned on me but then, like a bottle of shōchū, it hit me. The austere wooden interior, the gentle hum of Japanese conversations, the taste of buckwheat noodles, even the rain in its way, made me feel, well, at home—or something like it, anyway. I stayed in there for what seemed like hours, until the rain had long passed and I was full, and then stepped out and had myself a very satisfying walk around.

How had I missed it before? This area has apparently been booming lately, and not only with Japanese residents from all parts of Seoul, but with other foreigners and Koreans as well. One obvious reason, apart from all the great restaurants and bars, is that it’s simply the best place to do your Japanese shopping—whether for clothes, groceries or what have you. It’s also probably the best place to go for out-of-classroom Japanese practice if you happen to be learning. Everyone speaks it here. You can walk into any store or shop and be greeted as easily in Japanese as in Korean, and often quite well in English, too. They even have church services in Japanese.

Out on the freshly wet streets, I passed takoyaki stalls and izakaya one after another, and while it didn’t have quite the same atmosphere that parts of Kobe or Hiroshima sport, it did have something authentic about it, and it was better by far than any of the other Japantowns I’ve seen in the U.S., Canada or other parts of Asia. In fact, it was feeling more and more like a corner of Tokyo with every passing minute. A small grocery selling bargain-priced Japanese products. A Japanese-style karaoke bar. A woman walking past in a kimono. Reading online later, I found that Korea and Japan established diplomatic relations in 1965 and soon after Japanese companies established subsidiaries in Seoul, bringing with them a large number of Japanese employees. Over 1,000 of them live in Dongbu Ichon today, comprising 1/6th of Seoul’s Japanese population.

I finally found myself across the street from Sinyongsan Elementary School in an alley next to the Samik Apartments, unable to resist sitting down for another bite when I walked past the sashimi tabehodai sign for Mori Sushi (모리스시 02-790-3993). All you can eat sashimi? I had to indulge. The tuna was deep with flavor, and incredibly fresh. The salmon simply melted. I was in heaven. On my way out, I passed a charming place nearby called Gookhwa (국화 02-794-8105), an old-fashioned Japanese bar with standing room only that looked like it could’ve been an Asakusa hole-in-the-wall. I made a mental note to come back next time. Other spots I saw worth checking out were Gikku (기꾸 02-794-8584), a sushiya near Ichon Hyundai Apartments; Azigen (아지겐02-790-8177), also near Sinyongsan Elementary School, Mitaniya (미타니야 02-797-4060), in the basement of Samik Apartments; and of course Andersen Bakery near Ichon Stn. exit 3-1 (02-797-8838), where you can escape the sad monotony of Paris Baguettes and get your cake fix on for real.

I am biased, and I have to say the food was a big part of the experience for me. Being able to converse in Japanese was also a great bonus, but even if you speak no Japanese at all—or Korean—you should have no trouble enjoying your time there. It’s a great place for people who haven’t been to Japan yet, or those who have and miss it. Best of all, it’s right there in Dragon Hill, in the heart of Seoul.