Last Sunday in Seoul at Olympic Hall crowds arrived in droves to see Korea’s sweetheart MMA fighter Song Ga-Yeon. This was her debut MMA fight with Road FC, and with all of the media attention the pressure was on to perform. Perform she did, and in impressive fashion making quick work of Emi Yamamoto with a TKO in the first round. The emotions were high with her television cast mates in attendance from the Korean reality show Roommates. The crowd went wild as Song ran around the ring in celebration, and you could see the relief in her face.

This was a much different fighter than the day before at the weigh-in when Song failed to make weight. The devastation on her face was dreadful, but she was only 200 grams over. With some quick thinking and help from the Road Girls they removed her clothes. Carefully holding a makeshift curtain made from towels, they blocked the crowd of media photographers from capturing a million dollar photo. This was enough to make the required maximum weight for the fight.

With all of the excitement surrounding the Song fight it was easy to forget there was also a lightweight title fight between Kume Takasuke and Kwon A-Sol with the Korean taking the victory over the Japanese Takasuke. 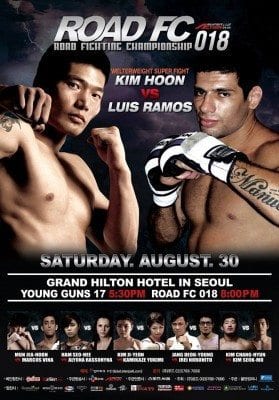 If you missed this event, Road FC 018 will be taking place on 8/30 at the Grand Hilton in Seoul tickets can be purchased at Interpark. Be sure to come out and support this great organization. You won’t be disappointed.