The Recipe Hunters Preserve Traditional Food Culture, One Country at a Time

In a tiny village in the small Croatian island of Brač, Anthony and Leila—a young American couple—searched for a famed Hrapoćuša torta recipe that had been perfected through decades. When they finally found Barbara, the older women whose recipe had first drawn them to Brac, they were surprised: without any hesitation, she handed it over. They asked Barbara why she was so willing to share a recipe that at one point may have been a sacred family secret with strangers like them. “Because no one will know it after I die and my recipe will disappear forever” she said.  It was then that Anthony and Leila fully realized the true valuable of Recipe Hunters—the crazy-seeming idea they turned into a lifestyle.

By most standards, Anthony and Leila were living well. Each had a successful, seemingly fulfilling career–Leila worked in cancer research and Anthony worked with JP Morgan and a healthcare startup. Once they turned 27, however, they started feeling they had “lost sight of [their] passions and zest for life,” and decided to do something drastic.

Each made a list of the countries they wanted to visit and activities they wanted to do. Realizing they both wanted to explore traditional food cultures, their combined list included “making olive-oil and wine in Italy, growing artichokes in France, milking goats in Sweden, making Halloumi cheese in Cyprus, deep-frying falafel in Egypt, and fermenting kimchi in South Korea.” Armed with an initial list of destinations and two one-way tickets, they set out in the summer of 2014 to explore the world’s cuisines and found Recipe Hunters. 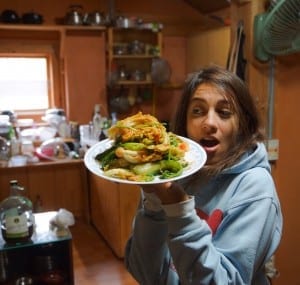 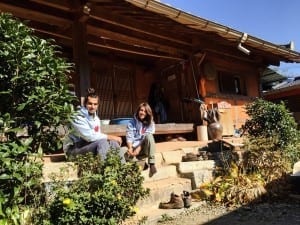 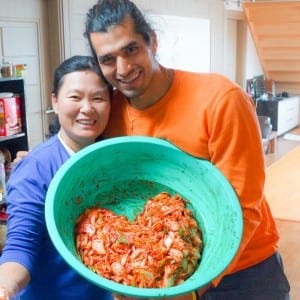 The Recipe Hunters website documents Anthony and Leila’s travels searching for the best, most authentic traditional recipes each country has to offer. Based on the concept that traditional, hand-made foods are “an expression of someone’s love,” Anthony and Leila hope that Recipe Hunters helps to “create a community of people that are interested in sharing their family recipes and traditions with each other, a community that is based upon positively contributing to grow together, and a community that understands the importance of food and family at the center of the dining room table.” Especially as changes in the food industry push traditional food production and preparation methods to the wayside, Recipe Hunters seeks to increase awareness of “the long-term risks [caused] by placing little-to-no value in our food system and thereby putting [people] and the planet at risk.”

In the year and a half since they started their adventure, Anthony and Leila have visited Norway, Sweden, Croatia, Italy, Cyprus, Lebanon, Egypt, Spain, South Korea, and Vietnam. According to Leila, there is no set plan–where they travel next is determined by “ticket prices, seasonal produce, and feel.” While in each country, Anthony and Leila volunteer their time in exchange for room and board while searching for recipes. Using online databases of people “looking for help and cultural exchange,” the two identify places to volunteer which allow them to experience the farm-to-table aspects of traditional food culture. To find hidden-gem recipes, their primary tool is friendliness.

Leila says the way they “find recipes is by starting up conversations with locals on the street.” Though it can be intimidating to reach out to strangers, for them it is all about perspective: The worst thing that could realistically happen is a person they will most likely never see again “thinks [they] are complete weirdos and walks away”—a small price to pay when there is the possibility of learning a one-of-a-kind 300-year-old family recipe. In countries where cultural or safety concerns prevent them from being able to reach out to strangers, they use alternative methods. In Egypt, for example, they contacted Slow Food Egypt and friends of friends in addition to volunteering at a hostel frequented by locals near the pyramids.In countries which are safer for American travelers, the one-on-one exchanges with strangers allow them to work as part ethnographic researcher and global ambassador, trying to learn from the communities they visit while allowing others to learn about Anthony and Leila’s own culture.

9 Popular Theme Parks in Korea To Visit This Summer

The ethnographic aspects of their work were especially evident when they came to Korea  this fall. Having spent time in both Seoul and in organic farms throughout rural Korea, the drastic changes caused by Korea’s rapid economic development were evident in the aspects of food culture Anthony and Leila were able to experience. In Seoul they say the felt surreal and overstimulated, but that it was refreshing to see in the food culture “glorious bits of tradition [shining] through all of the pseudo-creativity and new-found plastic” of a metropolis to provide the city with “a unique and authentic edge.” The countryside felt different–tranquil and calm, fertile and good-hearted. The contrast between the two made Anthony and Leila curious as to the differences between contemporary Korea and the Korea of the past. They seem almost nostalgic for a Korea they never experienced:

“The Korean people are proud of their food and stay loyal to it’s roots. However, we met quite a few Koreans who relied on their mothers or mother-in-laws for the essential ingredients to their cooking such as Doenjang or soy bean paste, kimchi, and their “secret” soy sauce. It is in these products that we discovered an antique food culture unlike any other. The traditional ways of making these products cannot easily be mimicked through spending a day with a family, but through doing them yourself, year after year, generation after generation. We fear that within the coming years these too will become extinct in Korean society and all that will be left are the plastic cartons of Haechandul’s finest, pasteurized and plasticized. We know that to truly capture the essence of Korean cooking would take years of practical research, living with Korean families and studying the art of their fermented and dehydrated products. We hope that the traditions of these culinary treasures are preserved by the Korean people of our generation.”

Though Anthony and Leila have moved on to explore the cuisine of Vietnam, their reflections on Korea reveal a tension inherent to their Recipe Hunters project: they cannot save traditional food cultures from disappearing. Through their work Anthony and Leila are able to document the most special homemade recipes they can find, but alone they cannot preserve hundreds–perhaps thousands–of years of culinary tradition. That is why it is vital that their discoveries are shared, so that they may be able to create a community of traditionally-made food lovers. Though Recipe Hunters cannot prevent entire food cultures from changing, it can help preserve snapshots of cultures in transition–like Barbara’s torta or whatever the secret is in halmoni’s soy sauce.

Best Summer Activities and Events on the Han River