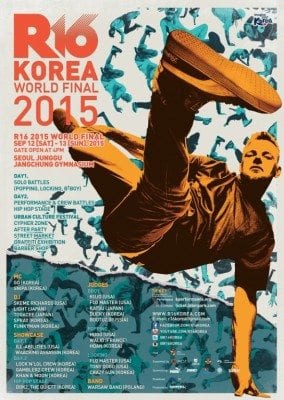 With the “R” in R16 signifying respect, 16 national teams will battle it out for one of the most sought after titles in street dance culture, in crew and solo b-boy, popping, and locking competitions. Spectators can expect unreal performances from legendary b-boy crews, including 2014 champs and Korean b-boy crew Gamblerz, as well as first-rate beats from local and international DJS.

Sponsored by the Korea Tourism Organization and the South Korean Ministry of Culture, Sports and Tourism, R16 is a celebration of urban youth culture and takes the street movement to another level. This year’s R16 World Final will take place at the Jangchung Gymnasium and a club, yet to be announced, in Seoul.