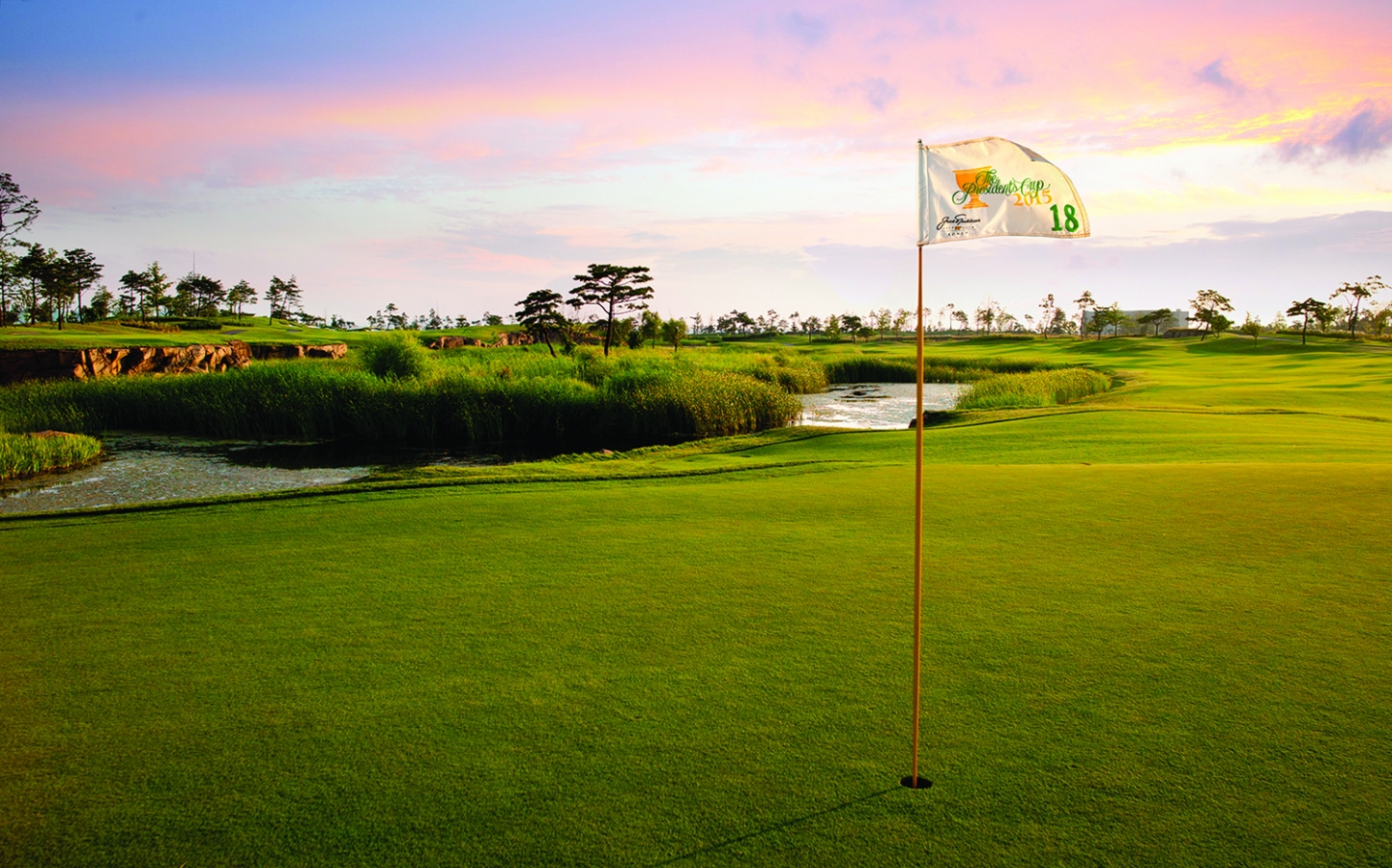 Whether a scratch player, armchair duffer, or one who puts golf spectating up there with watching paint dry, you really shouldn’t miss out on a chance to see two dozen of the world’s greatest active golfers battle it out during the Presidents Cup in New Songdo City over October 8th-11th.

Readers might be more familiar with the Ryder Cup, which pits US golfers against Europeans once every two years, while the Presidents Cup features Americans vs players from the rest of the world. As for the latter,  US teams have put up a record of 8-1-1 since the first installment in 1994, with the only tie coming in 2003 after captains Gary Player and Jack Nicklaus agreed to call the match amid fading daylight. The international team is not the odds-on favorite this time around either, but it will feature some of the world’s top-ranked players, including Jason Day, former Masters champions Adam Scott and Charl Schwartzel, and 2010 British Open winner Louis Oosthuizen (who was also runner-up in two of this year’s majors). 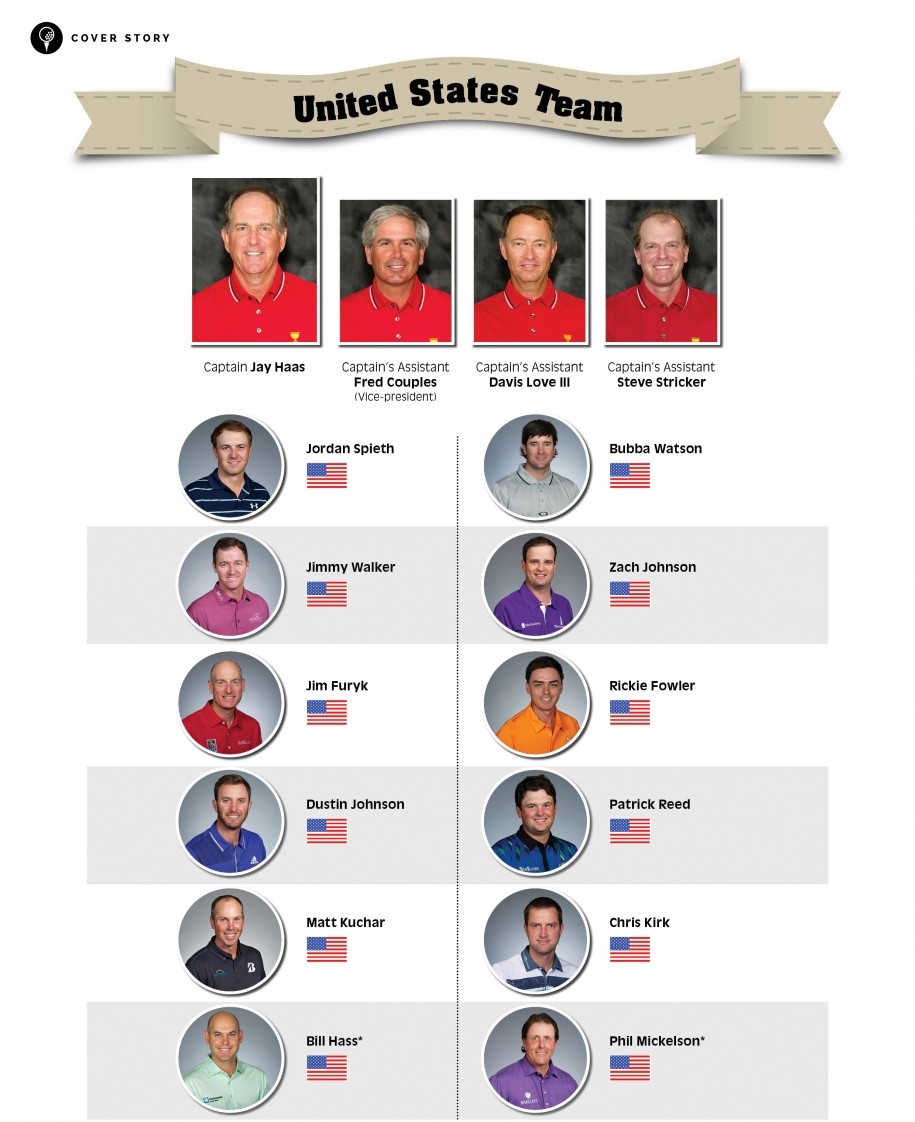 On September 8, this year’s captains Jay Haas and Nick Price selected two players each who fell outside of the top-10 world rankings for US and non-European international players to round out their respective 12-man rosters. The ten automatic qualifiers for the US, in descending order, are Jordan Spieth, Bubba Watson, Jimmy Walker, Zach Johnson, Jim Furyk, Rickie Fowler, Dustin Johnson, Patrick Reed, Matt Kuchar, and Chris Kirk.  While some immediately bemoaned Haas for making one of the captain’s picks his own son Bill, despite him ranking 11th amongst American golfers, there was a general mixed reaction for his other choice, Phil Mickelson. Sure, ‘Lefty’ boasts unrivalled experience, with 20-consecutive international team appearances for the US, but some note his 30th place points standings and uneven play of late, which includes just three top-ten finishes this season, although one of those was runner-up at the Master’s. Regardless, Phil “The Thrill” is bound to attract some who might have otherwise been unwilling to check out the tournament being held at the private Jack Nicklaus Golf Club Korea. Mickelson, during a recent interview on the Golf Channel’s Morning Drive program, said that he, “can’t wait to go to Korea,” and that such international tournaments were among “the most special events of the year”. He went on to say, “The last couple of months, I’ve worked really hard on getting my swing plane back on plane, and I’m starting to hit golf shots that I haven’t hit in a couple of years.” Trivia freaks can also note that Mickelson has replaced Tiger Woods by being the all-time lowest ranked captain’s pick, as Woods was 29th in points when picked by Freddy Couples for the 2011 competition. Still, Tiger famously made the winning putt for the Americans that time around. 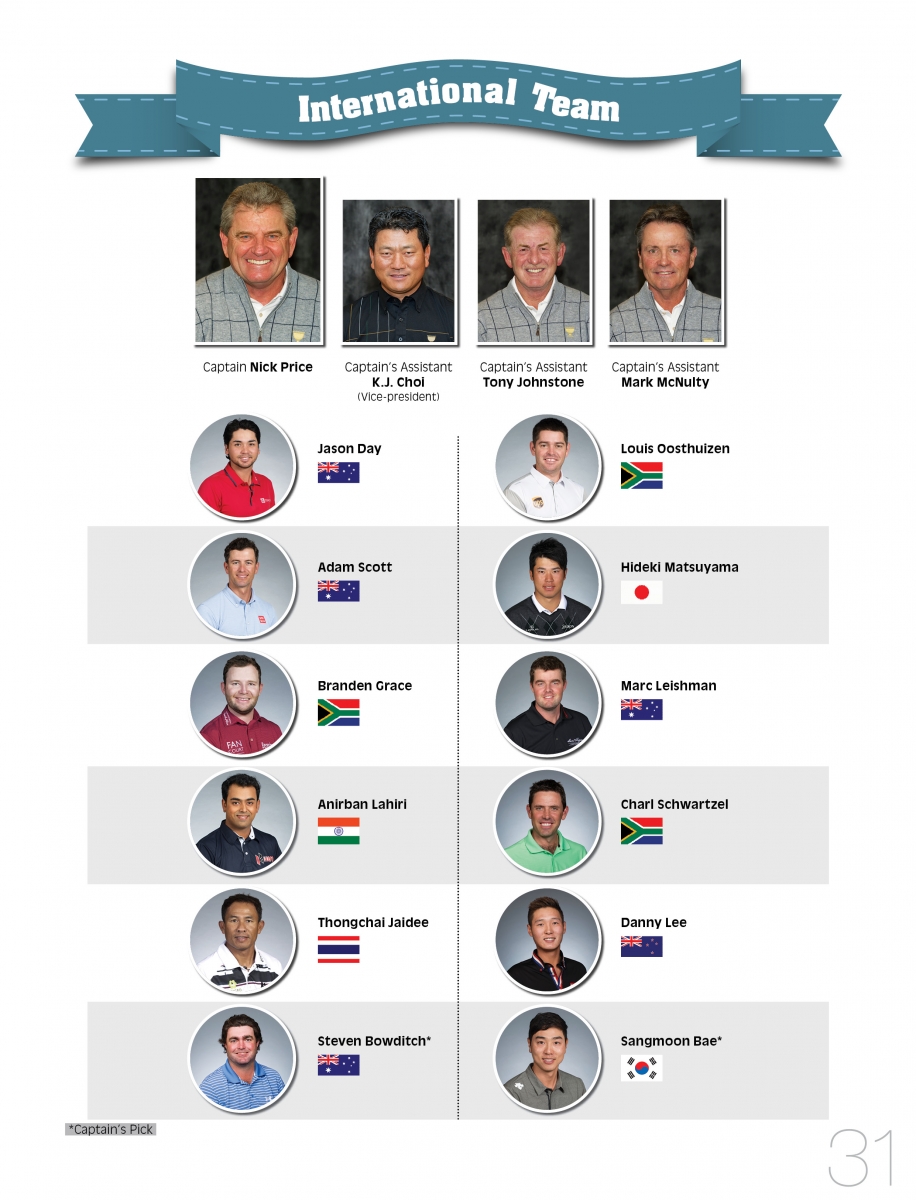 Two Korean-born Players on International Side

As for the international team, numbers one to nine at the time of placement were Jason Day, Louis Oostuizen, Adam Scott, Hideki Matsuyama, Branden Grace, Marc Leishman, Anirban Lahiri, Charl Schwartzel, and Thongchai Jaidee. Captain Price lucked out as Korean-born New Zealander Danny Lee took the number-ten spot — with his final putt at the Deutsche Bank Championship on September 7th — which meant opting for Sang-moon Bae as one of his captain’s picks should go down better with those who care about such things. His other pick is Australian Steven Bowditch. While Bae was denied a request to delay his mandatory military service in July, apparently by not spending enough time off home soil last year, Price said he was confident Korean authorities would delay conscripting him until after the tournament. The 29-year old has said that he looks forward to reporting for military duty following the competition, and one could also speculate on whether or not he will be called up to represent South Korea during next year’s Summer Olympics in Rio, which sees golf return as a medal sport for the first time since 1904. 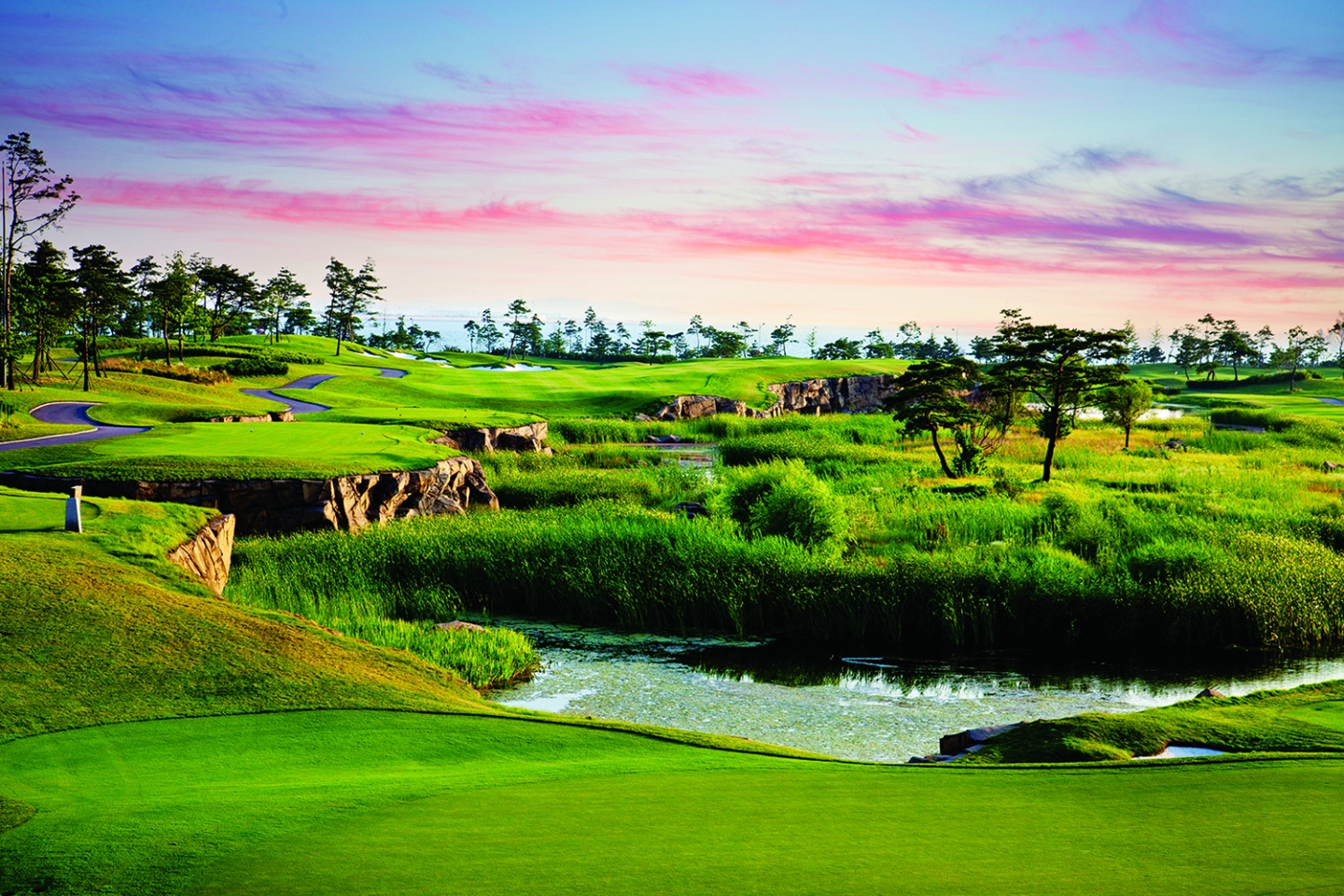 The Jack Nicklaus Golf Club Korea opened for play in 2010, with the course being one of several centerpieces for the built-from-scratch Songdo International Business District (IBD) area, which emerged off the coast of Incheon on reclaimed land. Nicklaus personally oversaw construction of the course, visiting Korea numerous times during the undertaking, and describes the place on his website as, “presenting a challenge to even the most talented golfers”, which should make it a fitting test for this contest.

A par 72 spanning 7,412 yards from the back tees, Jack Nicklaus Golf Club features plenty of bunkers and water hazards, while a steady wind blows off the West Sea, but it doesn’t have much in the form of steepness typical to local courses, most of which are carved into mountain sides. The club’s previous events include several local tournaments on the Korean men’s and women’s tours along with the Posco E&C Songdo Championship in 2010, which was the first Champions Tour event ever held in Asia.

Attendees should note that as a PGA-sponsored event, the Presidents Cup will have stricter rules than local tournaments. For example, all patrons, sponsors, volunteers, media, and vendors attending or working are subject to screening. The bag policy is also quite strict and there will be no “check” facility, so restricted items will either have to be disposed or taken off the premises.

Designed by renowned Californian architect Mehrdad Yazdani, the 17,716 sqm Jack Nicklaus Golf Clubhouse features conference, dining, and wine rooms along with a lounge. There is also a full-service fitness center that boasts an indoor swimming pool along with separate bathhouse style locker rooms. Visitors can find the usual golf items available in the pro shop, but plenty of Presidents Cup souvenirs will be also be on sale in temporary facilities during the event week.

On Monday, October 5th, the course will be closed to the public, and then open on the 6th and 7th for team practices, with that Wednesday also featuring the tournament’s opening ceremony. As honorary president of the cup, one might anticipate Park Geun-hye’s attendance. Thursday the 8th marks the official start of competition, with the day consisting of six four-ball matches, which are two-on-two contests, with the lowest score counting for each twosome’s lowest per-hole total. Friday’s contest will comprise six foursome, or alternate shot, matches, which also consist of two-on-two contests, but with each pair alternately hitting the same ball. Saturday mixes things up a bit, with five four-ball matches followed by five foursome matches. Fans will hope for the victor to remain undecided until late on Sunday, which is typical for these international contests, with the day consisting of 12 one-on-one rounds—the types of match play competitions that feature in co-sanctioned World Golf Championship tournaments (WGCs) like the Cadillac Championship and Bridgestone Invitational. 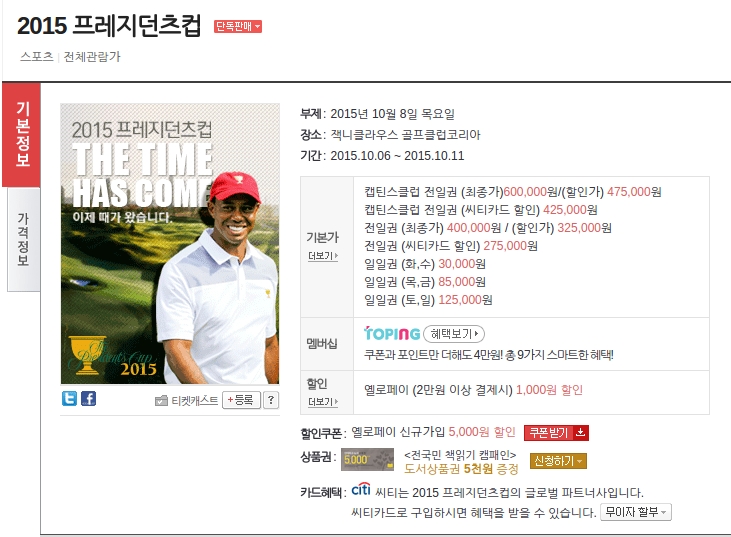 Interpark is the exclusive seller of tickets for the Presidents Cup, with their website curiously having a flyer with Tiger Woods on the cover, which seems to be the male golf equivalent of “sex sells” since you’re about as likely to see Woods at the tournament as Jong-un Kim. Meanwhile, KJ Choi, pronounced “Chey”, also features on the ticket seller’s site, and even though he will be in attendance, it will be as vice-captain, not as a player.

Prices differ if buying for the day or week, with the most-expensive category being a Captain’s Club pass that gets one through the gates Tuesday-Sunday. The aforementioned club oversees the 18th green, and according to the tournament website, will have food items for purchase, premium cash bar, big-screen televisions, private restrooms, scoring terminals, and non-reserved tables in a sports-bar setting. Tickets were still available as of press time, but a sell-out is expected, especially for Sunday.

These international competitions are rare in the stultified air of stuffy clubhouses due to actively encouraging noisy crowds, partisanship, nationalism, and chants of USA! USA! USA! Hopefully locals will counter the latter by busting out some hearty cheers of “Dae-Han-Min-Gook” or “Pilsung-Koh-Ree-Ah”. If you aren’t familiar with the latter two, just search for videos of Korean fans during World Cup 2002.

Jack Nicklaus Golf Club is within walking distance of the Central Park and University of Incheon subway stations on the light blue Incheon Line #1, which can be reached by transferring from Seoul lines #1 (at Bupyeong-gu Office) and #7 (Bupyeong) . The yellow Suin Line also intersects at Woninjae, while the Airport Express Train (AREX) meets the northern terminus of Incheon Line #1 at Gyeyang, but if coming from Incheon International Airport, it’s much quicker to catch a bus or taxi and take the 110 highway over the Incheon Bridge directly into Songdo New City. 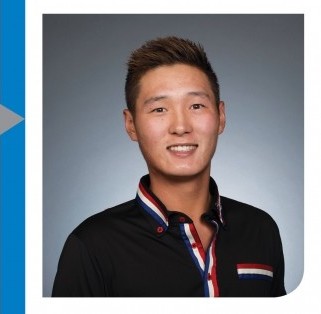 Danny Lee was born in Incheon in 1990, moved to New Zealand at eight, and became a naturalized citizen of that nation in 2008, which is the same year he broke Tiger Woods’ record by six months with a victory at the US Amateur aged 18 years and one month. The next year, Lee won the Johnnie Walker Classic in Australia, and with the tournament co-sanctioned by the European, Asian, and Australasian tours, he became the youngest-ever European Tour winner and second-ever amateur to do so.

Lee’s performance see-sawed over the next several years, and after failing to gain a PGA Tour card, most of his appearances were on the European Tour and select events throughout Asia. Victory at the 2011 WNB Golf Classic in Texas finally secured his PGA card for the following season, but he was unable to retain it. After spending the 2013 season on the web.com tour, however, his overall 15th place finish was enough to regain PGA Tour status.

In 2014, Lee trundled through the season—nb, the PGA switched from a calendar-based to “wraparound” schedule in late 2013—but attempts to simplify his swing and adoption of a claw putting grip helped him to a runner-up finish at the Puerto Rico Open in March. This year’s season could be called a breakout for the 25 year-old, which included three top-ten finishes before his maiden PGA Tour victory at the Greenbrier Classic in July, with a couple of more top-ten placements coming since, all of which helped secure his tenth place spot for non-European internationals.

Born in Daegu in 1986, Sang-moon Bae took up the sport at the urging of his golf-playing parents when he was 11. Two years after turning pro, his first title came at the Korean Tour’s 2006 Emerson Pacific Group Open, with three more victories coming on home soil over 2007-2009. Bae led the Japan Tour’s money list in 2011, thanks to three victories within a two-month span, finishing that year tied for 11th at the PGA Tour Qualifying Tournament, which earned him a tour card for the following season.

After making eight-straight cuts, Bae grabbed his first top-ten finish at the 2012 WGC-Accenture Match Play Championship, which included notable victories over Rory McIlroy and Ian Poulter. The next year saw his first PGA title at the HP Byron Nelson Championship, which made him the fourth South Korean born player to win on the tour after KJ Choi, YE Yang, and Kevin Na, as Anthony Kim was born in California. A solid performance this season had Bae close to automatic qualification of the Presidents Cup, while most pundits see his play of late exceeding that of international players who rank higher on the two-year rolling system.

As the only Korean citizen competing in this year’s Presidents Cup, expect large galleries to follow Bae around the Jack Nicklaus Golf Club. Despite just missing out on automatic qualification, he was an easy captain’s pick for Nick Price, who noted the importance of having someone on the team that Korean fans and media could root for. Price also cited Bae’s two victories on the course, which makes him the only participant to have won at the facility.