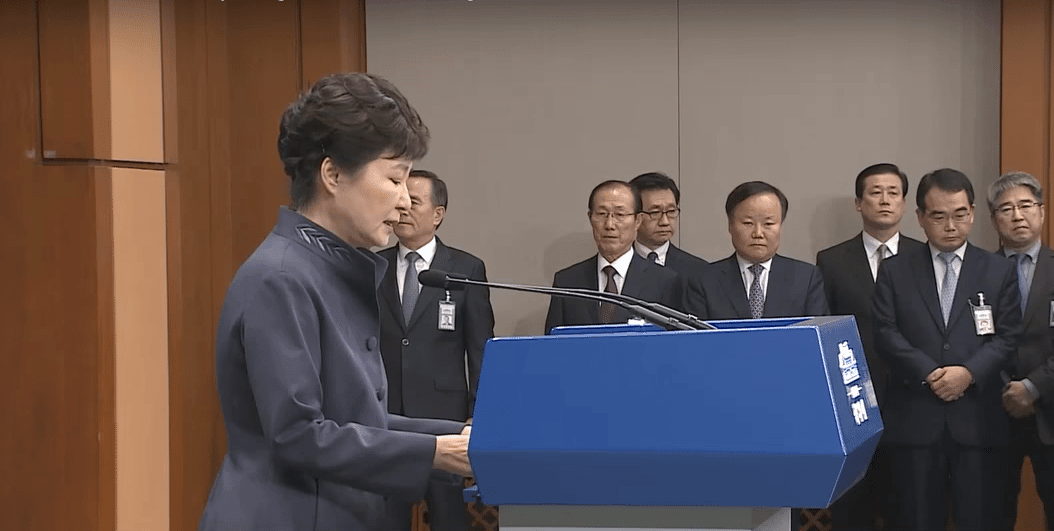 In her third televised addressed to the nation Tuesday, November 29, South Korean President Park Geun-hye leaves her fate into the hands of the parliament.

President Park has done public apologies twice in the past for the corruption scandal that sparked hundreds of thousands of citizens to protest. Mass protests calling for her to step down have been ongoing for several weeks now, too. However, she has not announced a formal decision to step down from her post—a five-year term due to end in February 2018—until today.

In her public statement, she asked the opposition-led National Assembly to decide on the issue of her resignation and come up with a plan for a safe transfer of power.

“I am giving up everything now. I will leave it to the National Assembly to decide on my resignation, including the shortening of my presidential term. If the governing and opposition parties inform me of the way to minimize the confusion and vacuum in state affairs and ensure a stable transfer of power, I will step down as president according to their schedule and legal procedures.”

The National Assembly, which planned to vote for the leader’s impeachment on Friday, have not yet responded to President Park’s statement as of posting. If they push through with the impeachment process, the South Korean leader would simply be suspended for a time. During that period, the country’s Prime Minister Hwang Kyo-ahn will take over her post. The Constitutional Court will have 180 days to rule on whether the impeachment was justified.

If on the other hand, they do shorten her term, they would have to agree on a presidential election for her replacement, as well. This could delay her resignation. However, stepping down from the presidency would remove the immunity of Ms. Park from prosecution. This is essential in determining her fate when it comes to the allegations of corruption involving her confidante, Choi Soon-sil, who is currently in police detention.

For now, we have yet to find out what the parliament’s next move would be, but the ball is definitely in their court.