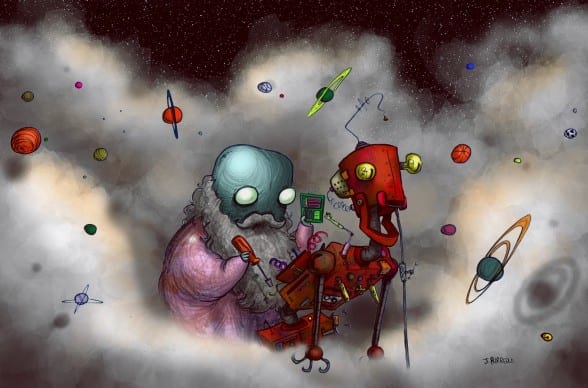 It was a couple of months since the horrific tragedy (details omitted) and the school still showed occasional signs of being internally rattled.

A handful of students sat in the back of the room working on team projects. A misfit boy fiddled with his own after school project – a robot. I reclined at my desk and gazed out the window, wishing I was in any other country.

“Do you know about supernovas?” the boy with the robot said suddenly. He was precocious and his English was good. I suspect he was too cerebral for the other fifth graders.

“I know a little about supernovas,” I replied.

“Stars explode when they are die,” he said, his tiny screwdriver tightening what I presumed to be an adorably petite death ray. He never looked up at me, just kept his chubby little face down and twisted the screwdriver. “After explode they make a new star and new galaxies.”

He was a weird kid. I liked him.

“Teacher, what do you think is happened when people are die?”

There was a question. I glanced at him and looked out the window again. “Oh, I don’t know,” I said in total earnestness, “Everyone has a different idea about what happens.”

“Teacher, do you think there is God?”

Like many ESL teachers, I was barely qualified to teach English, let alone expound upon ontological perplexities at a fifth grade level. I thought, ‘What is my role here? Do I tell him my personal views? In the wake of tragedy don’t I need to offer some glimmer of hope, even if I don’t subscribe to it myself?’

Grateful I didn’t have to put my skeptic’s stamp on the young lad’s mind, I gently concurred with him – but with an out. “I think the best anyone can say is ‘maybe.'”

The room was quiet again.

“But why go to school? Why work? Why anything do?” he shook, perspiration accumulating on his temple.

He continued to build his robot quietly. “Sorry. I just was mad. I lost a wheel. I found it now.” He switched the diminutive machine on and it rolled across the desk shooting lasers.