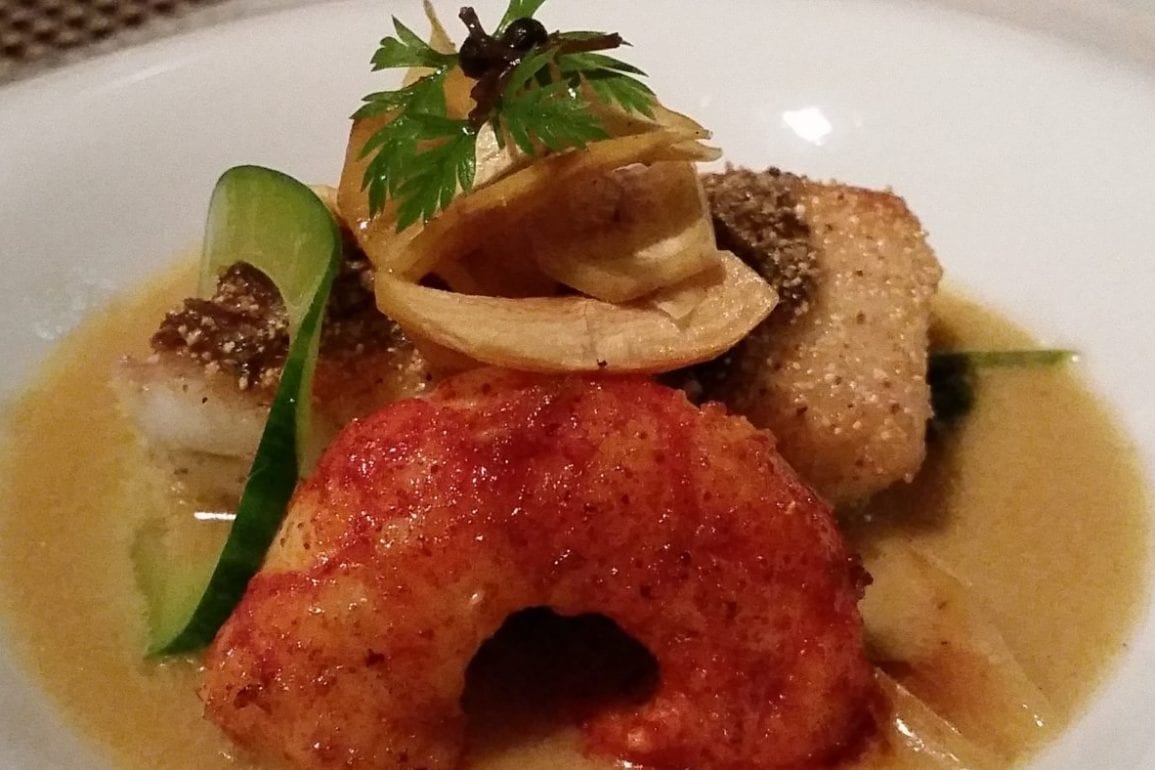 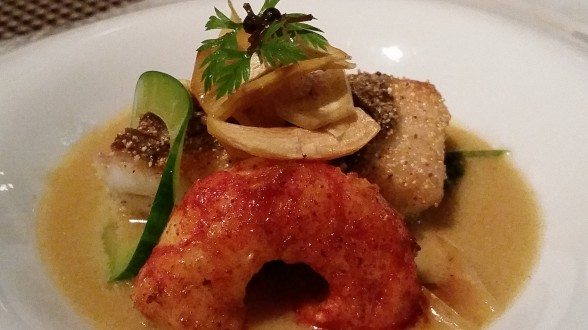 Normally we aim for W30,000 – W60,000 per person for the restaurants we review, and we even like that to include a drink or two. This month we’ve jumped up to W80,000 per person (tax inclusive) for Mingles restaurant – but with this increase we’ve stepped into a completely new realm of dining experience. 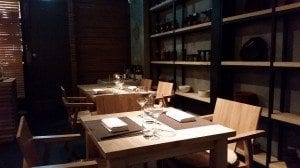 The Atmosphere at Mingles Restaurant

Walk down the stairs into the B1-situated Mingles and you will see a simple decor with an obvious emphasis on wood and stone. Chairs, tables and shelves are a natural wood while the walls are a stone facade with pottery decorating the wood shelving. A modern Korean restaurant, they themselves describe the food as “New Asian (Based on Korean),” while their website uses the tagline “Korean Nature Cuisine.” Owner-chef Kang Min-goo has worked at restaurants all over the world, including a stint at some of the famous Chef Nobu’s restaurants in Dubai and Maimi. Just as Chef Nobu is known as “the man who reinvented Japanese cuisine,” Chef Kang Min-goo is using Korean ingredients and traditions fused with Western ingredients and preparation methods to challenge our concept of Korean cuisine. And he’s succeeding.

As is practice at many of the highest-rated restaurants in the world, there is a single set menu option on any given day, your only option being the ability to choose from one of three mains dishes. On the evening we went the options were either Australian lamb chop, Korean beef tenderloin (additional W15,000), additional abalone & beef bibimbap (additional W8,000). I went for the lamb and we ordered a bottle of wine and awaited our first course. 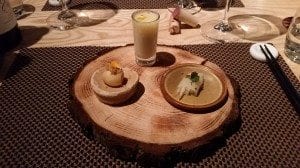 The first course (amuse-bouche) arrived with a beautiful presentation, sticking to the wood & stone theme. It consisted of a vegetable & herb raw halibut, a quail egg and a soup in a shot glass, all of which were explained in detailed Korean by the waiter as they were served. I decided I’d challenge our server a bit and check whether he could do the same in English. His English explanations were spot-on, and obviously the result of substantial practice. The halibut was quite tender, while the quail egg was surprising as it still had a soft yolk. Every other quail egg I’ve had was either raw or hard boiled. The shot-glass soup was also delicious, with bits of seafood in it. Each taste being just a mouthful, half the fun is experiencing a new taste with every bite. The conversation inevitably becomes taking turns sharing your thoughts on the various flavors; fun no matter who your company may be, and a great way to make new friends. 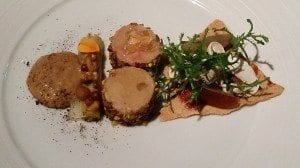 Next was the fois gras course, and now we get into the mind-blowing tastes. Obviously not a traditionally Korean dish, chef Kang served it with a plum wine (매실) / twen-jang (된장) sauce for one mouthful and with mushroom/green onion sauce on an herb chip for the other. Both gave the fois gras a very unique flavor to enjoy. That was followed by a “grains” course, which consisted of barley, rye, brown rice, milo, corn, lobster and a kelp (kombu) jam brioche. Once again a huge hit that had all of us raving, although the lobster flavor was drowned out a bit by the sauce. 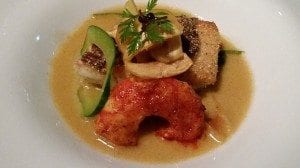 Then came the best course. It was the fish, shrimp & pasta course, served right before the main. This dish was stellar, with a pasta made from cabbage, potato and sweet potato in a beurre blanc (white butter) sauce topped with a grilled sea bream and accentuated with a jumbo shrimp. This would have been a great main on its own, but as a lead-in to the main it was beyond expectations. 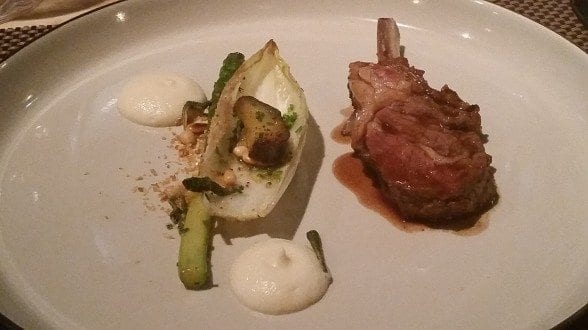 The lamb main course was terrific as well, although I must say that my chop was not well-marbled and instead quite fatty. I know this is a frequent challenge with lamb, but at these prices and considering they are only serving a single rib with each course, I would have hoped that they put a little more care into their choice of the chops. I still enjoyed every single bite as I tried to equally apportion a little meat with each chunk of fat, thereby accomplishing the marbling on my own. One of our dining cohorts left a chunk of fat behind for her doggie bag.

You Looking to Mingle?

Mingles has been open for almost 6 months now. There’s already a 2-week wait for evening reservations at this point. Fortunately you can ask to be put on the waiting list and people have a tendency to not show up for their reservations. In order to make sure that the tables are full, the restaurant calls all of its reservations the same day to make sure they’re still coming. Keep your evening open and you may get the call as late as 4 pm the same day to let you know that your table awaits. If you do, congratulations. You’re in for a treat.