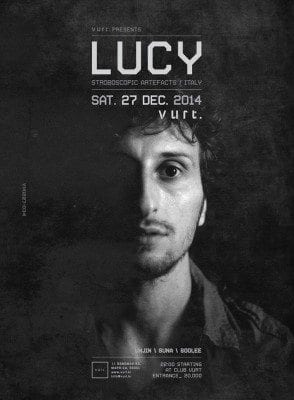 Prepare yourselves this December 27th at Club Vurt for an exploration into the deep and daring experimental techno world of Italian-born and Berlin-based Luca Mortellaro, who goes by the nom de techno of Lucy. Mortellaro is a producer, DJ, and electronic sound designer who first debuted in 2009 under his own label Stroboscopic Artefacts, which has received international critical acclaim and has set the standard for pioneering electronic music worldwide. Take a quick listen into his essential Resident Advisor mix, and you’ll hear a range of dark minimal techno, deep industrial sounds and dynamic textures that Mortellaro beautifully curates, taking you on a titillating journey to an ever more ecstatic place. It is this artistic skill and sophisticated quality that has earned his reputation playing at some of the world’s most diverse clubs and festivals: Berlin’s Berghain, London’s Fabric, Tokyo’s Dommune and Freaks Village, Amsterdam’s Trouw, Moscow’s Arma17 and New York’s Oktave party, along with Sonar, Melt and Tauron Festivals. His original, unique, and refreshing sounds go beyond avoiding conventionality; He brings inspiration and true art for tastemakers and listeners who desire to hear something new and beautiful.

For more information, see the event page on Facebook.