The Kiwi Chamber is hosting its annual Year End Grand Hui with the New Zealand Embassy at the Four Seasons Hotel on November 15 and it will be a big one once again, with over 200 guests expected. The event will be under the theme of Korea-New Zealand – “Inspire with Innovation,” and will be attended by New Zealand Ambassador to Korea Clare Fearnley and Mayor of Wellington Justin Lester, among many other dignitaries, chamber members and good friends.

For this year’s event, the ambassador will speak on the innovative relationship which exists between the two countries and the successes which have been achieved since the FTA entered into force in December 2015. 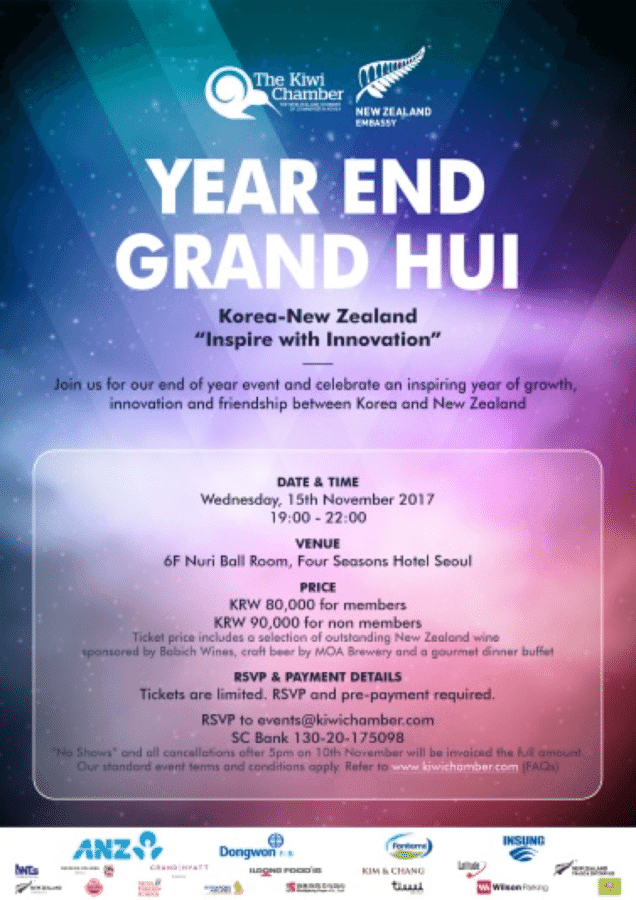 The Kiwi Chamber Year End Grand Hui has been held for eight consecutive years to celebrate the successful culmination of the year’s events, usher in a new board of directors and advisors and provide a vision for the upcoming year, while reinforcing the strong Korea-New Zealand business and trade relationship.

Known for its lively atmosphere and fun, the event will be held at the Four Seasons Hotel’s Nuri Ballroom and will include a fabulous buffet featuring several New Zealand food and beverage products, and include live performances, New Zealand-themed music and a raffle.