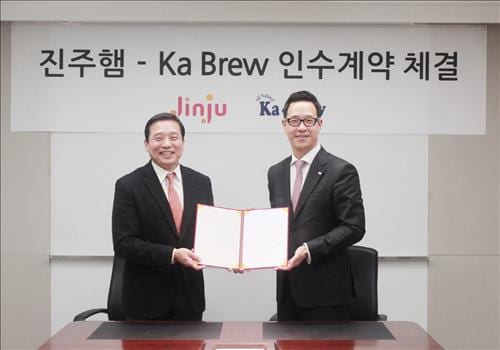 First, there was KaBrew, and their craft beer cruises and brewery parties. Then KaBrew started contract brewing for Craftworks and the customers started lining up. Shortly thereafter came a tidal wave of craft beer brewers, bars, importers and distributors that has filled your neighborhood pub with a massive variety of tasty suds. Thanks to a combination of changes to the legal system in 2011 and these two small businesses, locals have acquired a taste for and now demand a wide variety of quality beers rather than one of 3 mass-produced beers. Now majority interest in KaBrew as been sold to Jinju Ham. 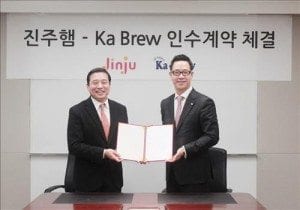 Jinju Ham has acquired a controlling stake in Kapa Brewing, the parent company of KaBrew, thereby immediately become a serious new player in the brewing game. Original owner Park Chul has not left KaBrew, but has become a minority shareholder in the operation. Jinju Ham CEO Park Jeong-jin has taken over as CEO of KaBrew in addition to his duties as the head of Jinju. For those who haven’t heard of Jinju Ham before, they make a wide variety of products from Vienna Sausages to frozen Sweet Potato Pizza (which rather humorously has a giant “HOMEMADE” written on the label).

We look forward to seeing what kind of creativity the Jinju Ham & KaBrew combination brings to the craft beer game in 2015 and beyond.