Is The Korean Won Dying? What Trump’s Victory Means Now 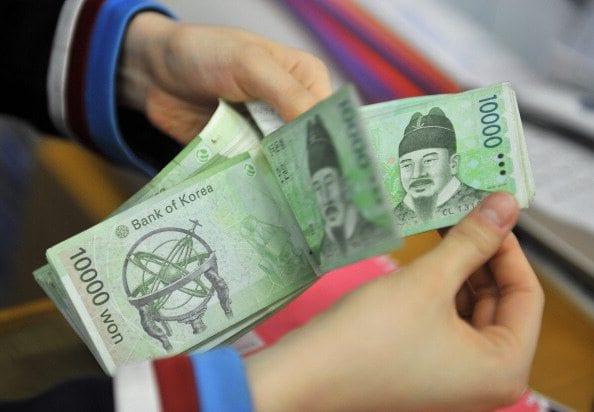 TO GO WITH SKorea-Japan-economy-trade-forex,FOCUS by Jung Hawon This photo taken on February 1, 2013 shows a bank employee counting out South Korean won banknotes at the Korea Exchange Bank in Seoul. A surging won and waning yen are eroding the bottom lines of South Korea's export powerhouses who are feeling the pinch after years of gobbling up global market share from their Japanese rivals. AFP PHOTO / JUNG YEON-JE (Photo credit should read JUNG YEON-JE/AFP/Getty Images)

There were fears that a Republican victory in the United States 2016 Presidential Election in November would send stock markets crashing. It did. Contrary to most investors’ expectations, Donald Trump pulled off an astounding victory over Democratic challenger Hillary Clinton on Tuesday, November 8. Markets were caught by surprise and sent into a tizzy.

Trump’s win also had a profound effect on currencies. By November 16, the Mexican peso, for instance, had sunk to past 20 pesos per US dollar, Malaysia’s Ringgit had fallen 3.8%, and even the Euro had fallen over 3%. So, how about the South Korean won?

On Wednesday, November 9, the won fell 1.3% from the day before to 1,149.5 won to the US dollar. Although the currency did reach the point of 1,157.3 to the dollar, traders suspect the government intervened to stop the plunge. Shares of automobile, renewable energy, and tech firms also dropped. By Friday, November 11, the South Korean won had fallen to a 4-month low, with expectations that it may eventually fall to even 1,200 won against the US dollar.

Koreans worry because of the now uncertain US policies towards South Korea under a Trump Administration. Mr. Trump had campaigned on an entirely opposite policy platform towards Asia than President Barack Obama had embraced.

Trump had called the US-Korea free trade agreement  a “job killer,” threatened to withdraw the 28,000 American soldiers stationed on the peninsula unless Seoul paid its “fair share,” and even suggested that South Korea (and Japan) should acquire nuclear weapons for themselves. By November 16, the won had plummeted to 1,176.1 against the US dollar.

What’s worse, since even the Japanese yen (while at first appreciating) has begun to slide against the dollar, investors are abandoning other Asian currencies altogether, including the won, lest these currencies plunge further. As it stands, things are not looking good for South Korea’s currency.

So, what does all this mean for you and me, expats in South Korea who have need of the won?

Well, if we are just short-term tourists, recent developments are good news for us. The US dollar, the Canadian dollar, Euro, and British pound all rose in value against the won after November 8. (the Australian dollar rose, but then went back down to what it was on November 8). This means we get more Korean won when we exchange our currency, and life is therefore cheaper!

On the other hand, if we are working in South Korea, or staying here long-term, we are probably getting paid in South Korean won. When we would want to travel home (or just go on vacation), everything would be more expensive. So, post-election trends in that case are not in our favor.

In all probability, we might not see any reversal in the current exchange pattern until at least Trump takes office on January 20, 2017, and, even then, we must wait until we can be relatively sure what policy implications a Trump Presidency will bring.

President-elect Trump has derided deals like the Trans-Pacific Partnership, NAFTA, and the Korea-US Free Trade Agreement, as well as advocated increased protectionist measures against foreign–including Korean–businesses. However, one cannot know for sure what Trump’s policies will be until after he has been sworn into office.

Moreover, he has been known to change his mind on occasion. For the time being, it could be unrealistic to expect the South Korean won to recover to its pre-election levels given the staggering levels of US policy uncertainty. If, however, after the inauguration, Trump assures South Korea of some stability and works out deals that will not threaten current economic arrangements, the won will have a better chance of stabilizing, and perhaps even recovering in value.