“Underwater adventure” doesn’t usually come to mind when most people think of Korea, but that’s exactly what you’ll find in the depths around Jeju Island. 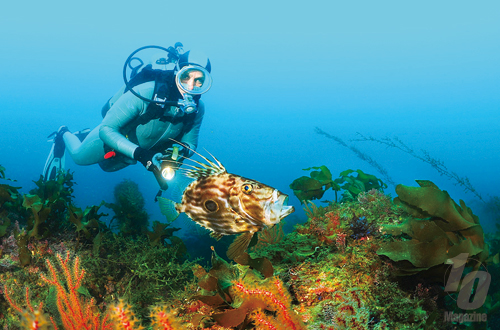 “There’s nothing to do in Korea except go to the bars.” How many times have you heard that one? For those looking for something a little more than a night out on the town, look no more. Make your way over to Jeju Island, Korea’s undiscovered diving paradise. Once you dive in Jeju you will never look at Korea the same way again.

When I first moved to Jeju, I was fortunate enough to have an apartment overlooking the Seogwipo harbor and its three islets: Munseom (Mosquito Islet), Supseom (Forest Islet), and Beom-
seom (Tiger Islet). Even though I had been diving since I was 15, I didn’t jump into the water right away. I saw the photos of tropical-looking fish on the flyer for the local submarine tour, but I thought the pools of fish and colorful coral were just a ploy, a way to get more tourists to pay W50,000 to go on the tour. Still, I often wondered what kind of underwater world was out there. 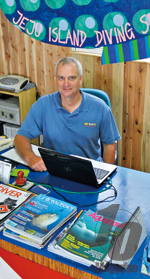 Then one day I met Ralf Deutsch, owner and dive instructor of the dive shop Big Blue 33. I could tell immediately he was a no-nonsense type of guy who did stuff by the book. He actually came to Jeju in 1994 as a professor of the German department at Jeju National University.

Then in 2001, Ralf decided to open his dive shop after seeing the underwater beauty Jeju had to offer. “I wouldn’t have started the dive shop if I didn’t think the diving was great,” said Ralf. I could tell he really believes that Jeju is a fantastic diving destination as he listed all the things you can see underwater.

He went on to say there is a unique mix of cold water and tropical species on Jeju: octopus, lionfish, scorpion fish, grouper, jack, butterfly fish, angelfish, boxfish, and many others. And then there are the numerous species of soft coral ranging in color from orange, yellow, and purple, to blue and white. They are like glowing underwater gardens, sometimes even on volcanic rock. In the cold season there are  forests of kelp growing from the ocean floor that reach all the way to the surface.
Jeju Island really is on par with some of the best dive destinations around the world. Wolfgang Poelzer, underwater photographer and dive journalist from Austria, described Jeju’s underwater world during his visit as an ‘attractive mix of Norway and the Red Sea – the black rocks and the kelp like in Norway and the soft coral and the colorful tropical fish like in the Red Sea.’

Convinced
After talking to Ralf and seeing some underwater photos at his dive shop, I knew his outfit was the one I wanted to dive with. I signed up for a dive and showed up at 9 am the next day.

For the first hour we prepared our gear and got to know the other divers over coffee and biscuits. Then we loaded up the van and took a short drive down to the port. Next, we loaded the tanks onto a fishing boat that took us on a 15-minute ride to Munseom Islet. Once we arrived we quickly unloaded our gear. As the boat pulled away I had to admit I felt a little like Robinson Crusoe being left on some deserted island.

We put our wetsuits on and Ralf gathered us for a briefing on the dive. I felt very safe and could tell he was a concerned professional. By now I was sweating so much inside my wetsuit I felt like I was in a sauna.

Finally the moment came and we leapt off the rocky islet into the water. As soon as I hit the sea and the cool salt water filled my wetsuit, I remembered why I like diving so much. You feel like a beached whale on land with all your heavy gear on. Moving around is cumbersome, especially with fins on. But once you’re in the water you just relax, glide around, and hover over the world below you. Only astronauts get to feel a greater sense of breaking away from gravity.

But the best feeling of all is when you put the regulator in your mouth, release all the air in your BC (buoyancy compensator), and slip into the bluish-green liquid below. You go instantly from a life of sound into one of weightless silence. Of course there is the rhythmic sound of your own breathing – the percolating pop of your own CO2 bubbles rising to the surface – but even that sound is almost therapeutic.

As you descend you realize that, without trying to sound too clichéd, there really is a whole other world down there. And best of all, you don’t have to surface for another 25 to 30 minutes or more.

Class Is in Session
Whether you are a certified diver or a complete beginner, Ralf can help you out. Big Blue 33 offers many types of courses that are all taught according to NAUI (National Association of Underwater Instructors) standards, so your certifications will be accepted wherever you go in the world.
You can take the following NAUI courses: Scuba Diver, Advanced Scuba Diver, Master Scuba Diver, Scuba Rescue Diver, Assistant Instructor, and Divemaster. 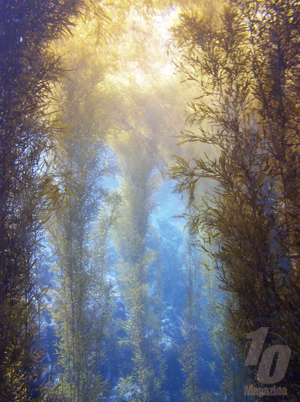 If you have never dived before but are curious about what it is like, you can take the one-day Try Scuba Diving Course. It is a non-certification course designed to give you a feel for scuba. Your instructor will teach you the basics and then shadow you on a shallow dive. You will have someone next to you at all times to make sure things go smoothly.

So if you are reading this article in a bar somewhere around Korea, looking for something new and adventurous to do, don’t hesitate. Korea’s best kept secret is out of the bag. Dive Jeju!

Diving Jeju Fast Facts
Contact:
Ralf Deutsch at Big Blue 33, bigblue33.co.kr
Dive Shop: 064-733-1733, Mobile: 019-9755-1733
Main diving season:
May through October, although you can still dive as late as December (the water temperature is still about 20 degrees around Christmas).
Where to stay:
Check out the Big Blue 33 website or just call Ralf directly and ask him to help you set up your reservation.
Prices:

Getting there:
By Air Flights leave daily from all around Korea. Once at the Jeju airport you can take the airport bus all the way to Seogwipo. Remember you can dive after flying but you cannot fly immediately after diving. You should plan for one night in Jeju before you fly back home.
By Sea