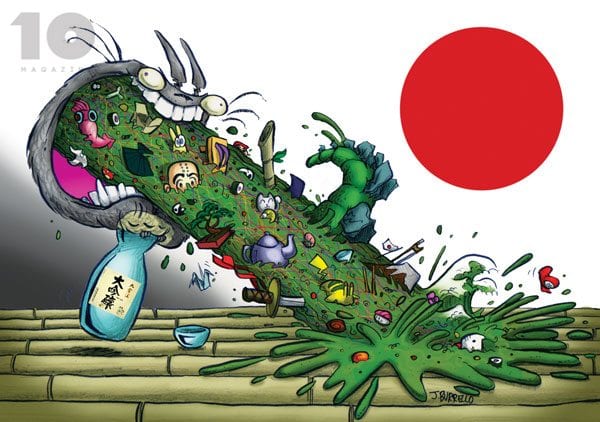 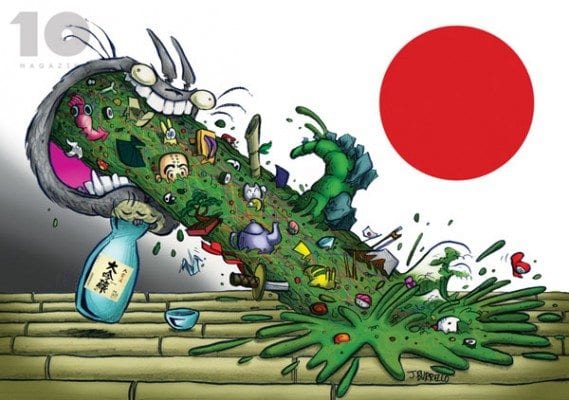 It was a rough late Saturday morning in Osaka, each of us vomiting into our waste baskets in our adjoining cabins at the Namba Station capsule hotel. My condition didn’t improve much. I spent the remainder of the day feeling like a hung over figure from a cigarette smoke-clouded Tom Waits song. Friday night, however, was epic: an unforgettable night that I’m surprised I remember at all.

It all began innocuously in a hole-in-the-wall izakaya not far from the main drag of Dōtonbori. We enjoyed overflowing shots of hot sake and cold, lime-plugged bottles of Zima with simple, but tasty treats of sashimi, maki, and tempura. Next, while basking in the dazzling neon luminescence of the iconic Glico Man advertisement, we crossed the Ebisu Bridge; a people watchers’ paradise, regularly crowded with prowling male escorts sporting 90s glam-rock Aqua Net hair. After a snack of piping hot takoyaki beneath a large sculpture of a self-cannibalistic octopus, we wandered the alleys of Osaka, bright and dark, in search of nightlife.

We came upon a dank alley noteworthy only for a sign with drink prices marking the entrance. Like moths to a bright light, we were drawn down that alley to Japan’s beacon of booze ‒ a glowing red izakaya lantern. Beside it we found a hobbit-sized door. We crouched through the diminutive doorway and were surprised by what was inside: a well-stocked bar tended by an elderly, Japanese man in a bow tie. The bar was quite dim and cramped, seating eight people, but quite welcoming and comfy in spite of the cinderblock, bomb shelter esthetic.

After beers and yakitori skewers at two additional bars, it was well past midnight. It was then we encountered a sign in front of an unremarkable, multi-story, apartment building. If the sign were to be believed, this structure contained not residences, but rather several dozen bars. This seemed improbable, so, for science, we decided to investigate. Fans of A Clockwork Orange, we selected the third floor Milk Bar as our destination. Arriving on the third floor, we indeed found a long hallway illuminated solely by bar signs. We were quickly ushered into the nearest bar simply named Bar5 and received the exuberant and sincere welcome we had become accustomed to in Osaka.

Bar5 is where the real debauchery began. For the next few hours, the seven Japanese there were to be our best friends in the world. We played a drinking game piercing a small pockmarked barrel with tiny plastic scabbards. The person whose scabbard sprung the monkey out of the barrel was rewarded with a shot of tequila. I was lucky enough to do just that and gladly downed my reward. Of course there was karaoke, plenty of karaoke, which included a shameful group rendition of, of all things, the famine relief song We Are the World. As daybreak grew closer, the couple tending bar ecstatically insisted that we toast to our newly formed friendship with not one, not two, but three shots of Jägermeister.

Heading out, we foolishly succumbed to free shots offered by a persuasive, alley-trolling bar owner. We each slurped one more Jägermeister at the Drunken Clam before returning to slumber in our morgue-like beds. As we crawled into our cabins at 5 am, like drunken heroes, we discussed how early before the 10 am checkout we would move on to Kyoto. Needless to say, we didn’t make 10 am, not even close. We sheepishly made our appearance in the lobby at 2 pm, paid our late checkout fees, and narrowly avoided puking again en route to Kyoto.

We wandered the streets and alleys of Kyoto just before sunset. In the dimly lit alleys of the Gion District we lacked company except for the elegant geishas who quietly greeted one another on their way to their evenings’ work. Nearby, we explored the majestically lit grounds of Yasaka Shrine. Compared to Osaka, Kyoto was so serene and relaxing. We were in bed by 10 pm. It was a delightfully tame ending to what had been an arduous day.