Korean Destination: Getting Down in Daegu

Words by David Birchall and shots by Dyren Billups-Adams

The land-locked city of Daegu is best known for its textile factories, beautiful women, and the muggy summers that result from its position in a basin surrounded by mountains. But as Daegu-resident David Birchall reveals, there’s so much more than that.

2011 was a big year for little ol’ Daegu, as the city welcomed the international jet set for the IAAF Track and Field Games this past August. It was a time for the city to blow off ingrained prejudices and welcome ripped waygooks from across the globe to the 66,000-seat Daegu Stadium. The sprinters and discus throwers have all gone home by now, but there’s still loads for visitors to do.

Pitch up at Banwoldang subway station and you’ve near enough found our epicenter. Endless rows of shops will beg for your money, be it a thousand won for plastic earrings or two million for a handbag at one of the vast department stores. Of course, Korean restaurants abound and you can always find your favorite, but the best bet for Western cravings are the huge burgers of Traveller’s Bar or the sloppy kebabs of the Turkish-owned Star Kebab, both minutes from the subway. Soon nightlife beckons, but any seasoned veteran knows you go first to the simply perfect Vinaroo, where a cocktail in a bag will cost you W4,000. 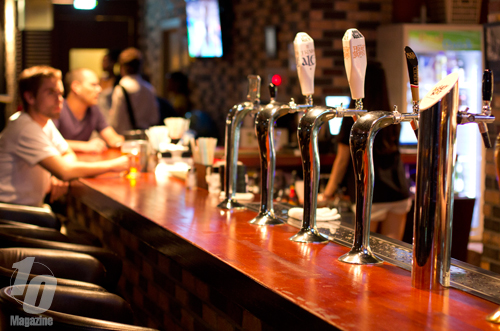 Downtown contains a madness of bars and clubs, and each dangles flashy carrots to lure pretty young things through their doors. Want to party ’til 4 am? Then head to the dark basement that is Who’s Bob. Like Thursday Party? We have two. All the gangstaz head to Urban, while the hardcore raving crew gets down to DJ Deported Noize in Kush. The slick and suave are only ever seen in Daegu’s very own superclub, Pasha. That one really is a bit special.

At a smattering of venues across the city, fine expat bands turn out regularly. Two of the best are Levine and Death by Kimchi, both of which were formed, cut their teeth and now continue their refinement here in Daegu.

Weather permitting, you can also head out for some good-time frolicking at the sprawling Duryu Park. It’s all too easy to spend a day among the acres of manicured lawns, the bungee-jumpable Daegu Tower and particularly Eworld (formerly known as Woobang Land), a fun, if not awe-inspiring, theme park that only sets you back W20,000.

Eworld’s greatest rival is Spa Valley, and for about the same price you get access to a genuinely fun water park with loads of slides, swimming pools and hot pools. You’ll need to take a cab from downtown, but there’s no place better on a hot, hot day.

Fashionistas head south to the enormous Suseong Lake, which becomes a whirling tempest of beautiful people at the mere hint of warmth. Situated in the fancy part of town, the surrounding streets are lined with epicurean delights, including our very own Ganga Indian restaurant, numerous top-dollar galbi haunts, and even a restaurant inside a real-life airplane.

For kids, there are swan boat rides around the lake and a fairly inauspicious fairground, featuring insanely easy dart throwing games, a 4D ride and a haunted house.

Once you’ve exhausted these tributes to modernity, you may be begging for some nature. If so, head to Mount Palgongsan. Situated in the northern outreaches of Daegu, this series of peaks allows for all manner of hikes, from the highly strenuous to the lazy stroll. Sites include Donghwasa Temple, where you can meet the resident monks, and the Gatbawi stone Buddha, a 4-meter tall statue high up on Palgongsan’s slopes. It was carved over 1,000 years ago, and, according to theologians, can even grant wishes.

One of the beauties of Daegu is how easy it is to get around. The two-line subway system and legion of buses means you’re never much more than 30 minutes from downtown, and the two large university districts here are easily accessible. The largest of these is Kyungpook National, inconveniently off the subway line, but cab fare from downtown is only W3,000.

Here lies Daegu’s finest Indian restaurant, Maya, and Sugar Joe’s, a popular place for foreign bands to play, as well as a host of cheap shops, bars, coffee shops and eateries.
Slightly further out–ten stops west on the green line to be precise–lies Keimyung University. This area is replete with well-priced restaurants and makgeolli houses.
Slightly further afield, tourist attractions such as Haeinsa Temple, home to the 81,000-wooden block Tripitaka Koreana, give footloose travelers even more to experience.

Top Five Things to Do in Daegu

Get in touch with some of Daegu’s essential establishments using the contact info below.