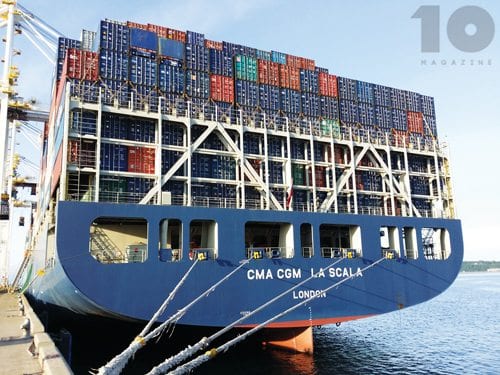 Every summer vacation, I find myself flying from ICN (Incheon International Airport) to LAX (Los Angeles International Airport) via either Korean Air Lines or Asiana for the 12-hour flight across the Pacific Ocean. On clear days, looking out of the plane’s 10-inch peepholes down below, an endless sea of blue covers the landscape stretching in all directions; only discernible from the hue of the sky above by the occasional whitecaps which attest to its restlessness. The sea seems to be a forgotten entity when cruising above at 35,000 feet, with plane travel dominating our means of transportation, making the world a seemingly much smaller place than it actually is. However down below upon those windswept oceans, 90% of everything is being transported upon container ships, moving from this land to that, supplying us with everything we need, and in comparison to planes, these container ships are dominating in terms of both size and importance. On a recent Wednesday, I departed from Busan aboard one of those container ships set for a journey across the Pacific Ocean taking 12 days, not 12 hours, and experienced the single greatest travel adventure of my life!

The CMA-CGM La Scala is a British-flagged, French-owned vessel, staffed with Romanian officers and a Filipino crew. Including myself and two other passengers, the total number of souls aboard was 33, living and working in complete harmony upon the high seas. While for me the journey was more of an adventure, for the officers and crew, it was a job. They spend not 12 days, but rather nine to ten months aboard, with a occasional few hours on shore-leave when docked in various ports of call. Still though, they seemed in high spirits, treating me with a mixture of curiosity and humor, wondering why I would choose to take this means of travel home. I grew up sailing with my parents, from the Channel Islands off the coast of California to the Sea of Cortez off the coast of Baja, but never venturing further than a hundred miles from the nearest shore. Joseph Conrad said that “The true peace of God begins at any spot a thousand miles from the nearest land.” I wanted to see if he was right.

Following what is called “The Columbus Loop,” these lines of container ships make Asian calls in Tanjung Pelepas (Malaysia), Hong Kong, and Shanghai before docking in Busan. From there, it is nonstop for about two weeks across the Pacific before arriving in Seattle, U.S.A., and Vancouver, Canada where the import/export dichotomy between Asia and North America is fully evident. Returning back across, the La Scala again makes stops in Asia before heading through the Suez Canal and the Mediterranean, arriving nearly two months later on the East Coast of the U.S., again, delivering goods that satiate American wants.

Boarding with one other passenger in Busan, there was already another individual on board, who had started his journey in New York, entering his seventh week as a traveler on the boat. Their circumstances were much more interesting than those I find in seat 24H on Flight 201, and with about two weeks together, there was plenty of time for storytelling. Evan was a 27-year old backpacker who was trying to circumnavigate the world without flying, with an extended stay in Shanghai completing a three-month internship. James was a 65-year old gentleman from the state of Georgia  in the U.S. who simply wanted to see the world, taking the ship for the entirety of its journey from East to West Coast- the long way! Both were fantastic companions, as travel of this nature is admittedly not for everyone. We shared meals together daily, along with stories from our pasts, combined with hopes for our futures.

Accommodations aboard the La Scala were better than anything I have ever experienced, with a berth larger than my apartment in
Korea, and with three five-course meals daily; more food than even I could handle! In addition, there was a passenger “Recreation Room” with both movies and books at our disposal, as well as a “Fitness Room” with table tennis and weights. Moreover, even as passengers, we were allowed reasonable access to anywhere on the ship, including the bridge where the navigation took place, as well as the deck itself. We were able to walk from the bow to the stern, only a few meters from the passing Pacific, which was grandiose in its enormity. To be that close to water and that far from land helps to put into perspective the fact that 70% of our world is covered by oceans, their importance is impossible not to realize when sailing upon their surface.

My favorite part of each day, and the trip itself, was at dusk atop the bridge, peering out at the endless horizon in each direction. Time for contemplation as both the sky and sea raced towards their darkening hue, with the sounds of waves crashing against the hull, a reminder of who was really in charge out there in the middle of nowhere. The officers and crew alike have a respect and admiration for the sea upon which they earn a living, and likewise, for the boat on which they travel. The La Scala for me, provided a peace which, like Conrad said, cannot be attained near land, supplying me with not only a way home, but with memories to last a lifetime. 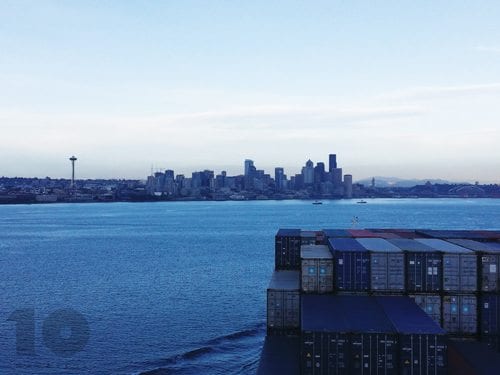 [author] [author_image timthumb=’on’][/author_image] [author_info]Matthew Jellick has been living, teaching and traveling in Korea since 2009. Having spent time during his childhood aboard sailboats off the Coast of California, he always wanted to traverse the Pacific Ocean’s boundless horizons, and this trip home gave him such an opportunity. For specifics of his voyage, contact him: JellickKorea@gmail.com