Coloring in the Favelas of Busan

Words and shots by Ben Cowles 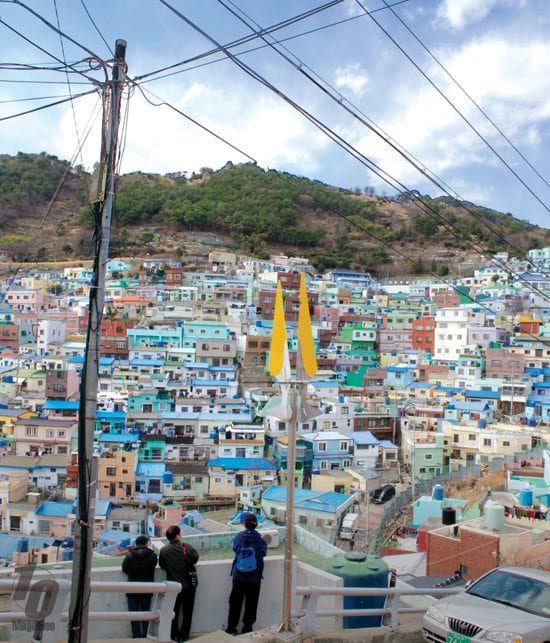 The past six decades have absolutely transmogrified South Korea from poorest nation on Earth to one of great opulence and wealth. Busan has benefited mightily from the country’s change in fortunes, but like cities the world over, booming Busan has its fair share of poor neighborhoods. Pushed out to the margins of the city, these hidden districts face a similar situation to the famous favelas (shantytowns) of Brazil. With rising costs of city living, it seems that Busan’s incoming tourist and business dollars are forever out of reach for these communities. But a few of these rustic areas are using colorful street art in hopes of attracting visitors.

Taeguk Village (태국마을) (also known as Gamcheon Cultural Village) is one such suburb on the breadline. In the early stages of the Korean War, Busan became the last bastion of hope and a beacon for those still loyal to the UN-backed government. Taeguk Village was hastily constructed as a temporary refugee camp for the thousands of displaced peoples holding out against the North. With the ceasefire effectively ending the war in1953,Busan gradually evolved into the dynamic megalopolis it is today, yet progress in the camp-like Taeguk Village remained slow.

In 2009, Korea’s Ministry of Culture, Sports and Tourism designated Taeguk Village as host to its “Art Village Project”. Street art virtuosos commissioned by the project moved in and transformed the rustic village into something of a living art gallery. The theme stuck and the town has since added more works to its oeuvre, as well as a light sprinkling of restaurants and cafés.

Seeing how Busan surrounds Taeguk on all sides, the descriptive word “village”, at least in Western terms, is a bit of a misnomer. Wording aside, though, Taeguk certainly does give off the small-village vibe thanks to the relaxed pace of life, winding paths, congested houses and nonchalant cats. In contrast to the chrome skyscrapers back in the city, Taeguk Village is awash with bright colors, narrow pathways, curious statues, magnificent graffiti and interactive exhibitions in previously empty homes. To aid you in discovering all of the village’s artsy secrets, grab a trusty village map, which can be picked up at the visitor center near the bus stop or at any of the nearby cafés and shops. Stamping the back of your map at all seven miniature galleries scores you a nifty little postcard when presented to the observatory atop the hill. Or just follow the tropical fish… that’ll make sense when you get there!

In the words of its own tourist paraphernalia, Taeguk Village “has opted for preservation and rejuvenation, rather than redevelopment, using its resources to enrich the cultural content [it possesses].” “Its resources” are, namely, the beautiful view of the sea from atop the hill, the tranquil atmosphere within, the friendly faces of the locals and the feeling of having escaped the city despite being engulfed by it. 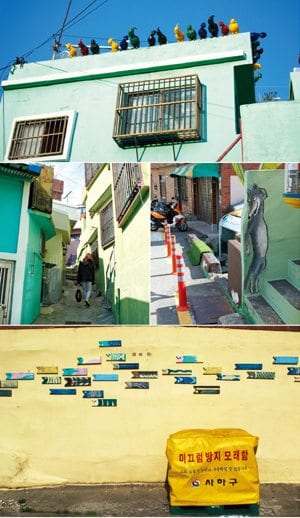 Anchang Village (안창마을), another hillside suburb of Busan, has tried emulating the success of Taeguk. It too has allowed artists to come in and color-in its walls, but the village is very much off the beaten track and far less developed for tourists.

However, Anchang Village is very much off the beaten track, and is therefore much earlier in its tourist development. Despite this, a growing number of day-trippers do venture to these parts.

Most of the town’s murals are clustered around the bus stop and to be honest, there aren’t that many to see. However, picking a random direction and getting lost in the vibrant, serpentine alleys is the best way to visit. A multitude of wires criss-cross above homes and most doorways are adorned with little pieces of handicraft. The Busan vista viewed from atop of the hillside is definitely something to behold.

The popularity of Taeguk Village seems to have helped rejuvenate the town as the cafes, restaurants and tourist facilities have spurred some much-needed development. However, it remains to be seen whether Anchang Village has benefitted at all. Remember that both villages are filled with actual homes, so please respect the residents’ property and be mindful of what you photograph.

To Taeguk Village: From exit 8 at Toseong Station (orange Line 1), follow the street around the corner to the right. In front of the Busan Cancer Center, catch bus 2-2 to Gamcheon Elementary School.

To Anchang: Take the No. 1 mini bus from exit 5 of Bomil Station on the orange Line 1. Get off at the last stop.