Color Me Rad: Are Color Races Misappropriating Culture or Running with a Good Idea? 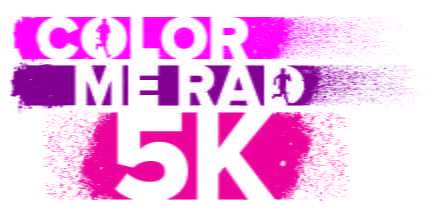 Color Me Rad: Are Color Races Misappropriating Culture or Running with a Good Idea?

Last Saturday, I attended Seoul’s second annual event by Color Me Rad at Jamsil Sports Complex. Color Me Rad is one of the popular 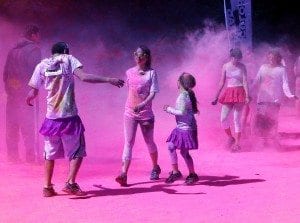 5K color races that pummel participants with dyed cornstarch along a marked course. My group started running just before 9:25 a.m., and it was about 9:50 a.m. when we crossed the finish line in all our sweaty, kaleidoscopic glory. I don’t know my exact time because Color Me Rad isn’t timed; in this way, it appeals to people who may otherwise feel uneasy about running an organized race.

The occasion comes stocked with opportunities for exposure on behalf of DJs, local restaurant vendors, and various domestic and international brands. It promotes exercise, community spirit, and a general sense of joy. What’s more, each Color Me Rad event donates a portion of its proceeds to a local charity. Saturday’s run benefitted the non-profit Purme Foundation and its construction of a rehabilitation center in Mapo, Seoul, for children with disabilities.

Overall, Color Me Rad was a great experience, and I got some cool photos out of it, too. Surely you’ve seen similar photos across social media. The popularity of these color race events has grown vastly since the debut of The Color Run in January 2012, so the core motif borrowed among competing organizations is rather derivative at this point. However, critics say there is a darker, reductive aspect at play that isn’t receiving enough attention.

Recently, the neologism Columbusing—when Westerners “discover” and exploit anything that is not new—made its way to NPR. A thoughtful article explained the term and covered a number of Columbused cultural heritages like empanadas and hummus. It also highlighted The Color Run’s alleged cultural misappropriation of Holi, the vibrant Hindu festival in India. The writer, Brenda Salinas, asked, “When is cultural appropriation a healthy byproduct of globalization and when is it a problem?”

The line between cultural exchange and barefaced misappropriation can be blurry, but that’s not a new conversation in Korea. It’s true that Korea is still learning from occasional blunders like televised blackface skits and implicitly racist advertisements. But on the whole, Korea is lauded for its ability to fuse multicultural components into its own identity seamlessly. Therefore, on a sociological level, a race like Color Me Rad could be considered a perfect fit for Korea. Additionally, the country’s passion for activities outdoors, like marathons and music festivals, helps events like Color Me Rad work well here.

Regardless, the major criticism of novelty color runs hasn’t been the use of dyed powder but the way organizations seem to dodge full disclosure of their strategy’s Hindu roots. Granted, the word full is a significant chunk of full disclosure, because the companies do acknowledge Holi, but the information is usually a vague mention relegated to the FAQ section of a website. Critics say sharing the information this way lets companies mask the inauthentic nature of their event and keep participants ignorant of any conceivable religious history associated with it. That, in theory, could be tantamount to one culture—the Western culture that “invented” color runs—dominating another culture through exploitation.

It’s debatable, however, since the information is listed. Color Me Rad’s website provides a respectable amount of information on Holi, and it remains consistent with the upbeat and lighthearted tone of the rest of its site. Readers get a simple overview of the holiday, and they’re encouraged to check it out for themselves:

Color Me Rad is loosely based off of the Hindu Festival of Colors, otherwise known as, Holi. Just as you usher in a new year of radness in your life by signing up for Color Me Rad, Hindus usher in a new season, spring. The festive colors used are a sign of winter’s end and springs new beginnings. To find out more, visit wikipedia or just visit India. That’d be more fun than reading. And who really knows how accurate Wikipedia really is, right?

The Color Run, on the other hand, drops Holi among a list of other inspirations:

The Color Run is the first paint race of its kind and was inspired by several awesome events, including Disney’s World of Color, Paint Parties, Mud Runs, and festivals throughout the world such as Holi.  We wanted to create a less stressful and untimed running environment that is more about health and happiness! We hope that The Color Run can act as a catalyst to inspire continual healthy living.

At any rate, the information—however streamlined—is there if anyone wants it. 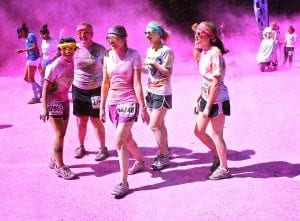 Yes, in brief, Holi is a traditional Hindu holiday also called the Festival of Colors, and it’s celebrated on the final full-moon day of Phalguna, the twelfth month on the Hindu calendar; this is generally February or March on the Gregorian calendar. It marks the return of the spring: the colors, the weather, and the Rabi crop. It’s a way to revive the community after the winter, and during Holi, people focus on repairing relationships and resolving disagreements.

Like most holidays, Holi has scriptural stories attached to its festivities. The celebration starts with a bonfire called Holika Dahan, which represents a story of good versus evil. There is also an amusing legend behind the play with colors: Krishna, whose skin was blue, worried that his crush would dislike him because of his skin tone. His mother suggested that he approach the girl and change her face to a different color, which he did, and the pair began dating. To commemorate this story, people turn friends, family members, and neighbors into walking works of art with traditional plant powders and synthetic pigments.

Clearly, there is a rich history to the holiday, so isn’t stealing from it wrong? Well, sure, the term stealing doesn’t hold a typically praiseworthy subtext, unless your survival depends on it or you’re Robin Hood, and even then it’s questionable. Moreover, the plot thickens if more and more companies worldwide begin utilizing similar fusion techniques that incorporate aspects of the hot cultures du jour, including Korean. Nonetheless, many a prominent sociologist—Tarde, Cooley, Faris, and others—once suggested that imitation will never fully stop, because it’s wired into the nature of the human race as a foundation for evolution.

In fact, the philosophies behind the topic of imitation have, themselves, received much . . . imitation. In 1976, Richard Dawkins’ controversial book, The Selfish Gene, introduced the idea of memes—ideas, behaviors, styles, or usages that spread among people within a culture. It’s a subject Susan Blackmore toyed with twenty-five years later in her quirky book, The Meme Machine, in which she defends imitation’s integral role in the evolution of culture.

Both authors discuss a possible algorithm for evolution and suggest cultural development requires variation and selection. Of course,
it’s evident what cultural element novelty color runs select and how they repurpose it as a saleable product. But as mentioned, tossing dyed powder at people for fun is not an original idea among competing organizations, and it undoubtedly wasn’t a form of cryptomnesia, a forgotten memory that returned to consciousness and appeared to be of original creation, even for the originators of Hinduism. Simply put, the idea spread because it was good and it worked, assuming the “job” of an idea is to be good, to work, and to catch on. The truth is no one knows the exact origins, and that isn’t just because there is no documentation about the precise moment in history when the first person tossed dyed powder at someone as a lark; it’s because there was never any precise moment at all.

Consider, for a second, the ways in which imitation was the seed of invention for everything people enjoy: music, pieces of literature, languages, artworks, meals, jokes, architectural styles, and fashion. Even this article, supposing you’re enjoying it, is heavily founded on ideas by other writers like Jonathan Lethem. Imitation is in everything from the origins of Christmas trees to the reasons you cover your mouth when you yawn or cough. Sometimes when imitation is obvious, it can shock or offend people (e.g., Katy Perry’s misappropriated costumes). Other times, it’s so hidden or interwoven that it appears clever or goes unnoticed (e.g., the way contemporary hip-hop is an amalgamation of nested allusions to other genres and the various experiences, beliefs, and inspirations that affected artists in those genres). In this way, no idea is ever completely novel—theoretically.

But the notion that no idea is novel should not embolden insensitivity toward an established norm or a system like religion, and it certainly should not give people permission to lack knowledge of the world around them. On the contrary, it should spark dialogue and move people to learn more about the pieces of the collage that is modern society. Similarly, it should give people room to question both the validity and the motivations behind claiming ownership of intellectual property.

For example, one might consider the reasons why critics of color runs see the use of the concept as exploitative. After all, the 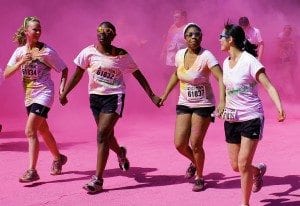 information is provided on a website, so what reason is there to be upset? Perhaps by recasting a Hindu concept and profiting from it without giving more credit where more credit seems due, it could rob a large group of a chance to benefit—economically, socially, etc.—and to share its culture with others. On the flipside, what advantage would there be for the organizations to acknowledge the roots in more detail if their commitments are unrelated to Hinduism yet well intentioned in other regards? Does an impression of societal dominance even remain once the event goes abroad, or is that argument a bit convoluted?

In the end, after much reflection (and rationalization), I decided that there were more pros than cons to running the race with my friends. I love to run, and the vibe of races in Korea is something truly special. Plus, I liked the thought of helping a non-profit rehabilitation center get started. If nothing else, my participation in the event produced this article, so I learned a little more about the Holi festival, and perhaps you did, too. The crux of the matter is that, much like a blend of colorful powders, the topic is neither black nor white; rather, it’s a complex and oddly beautiful mess that represents the shared experiences of a community.