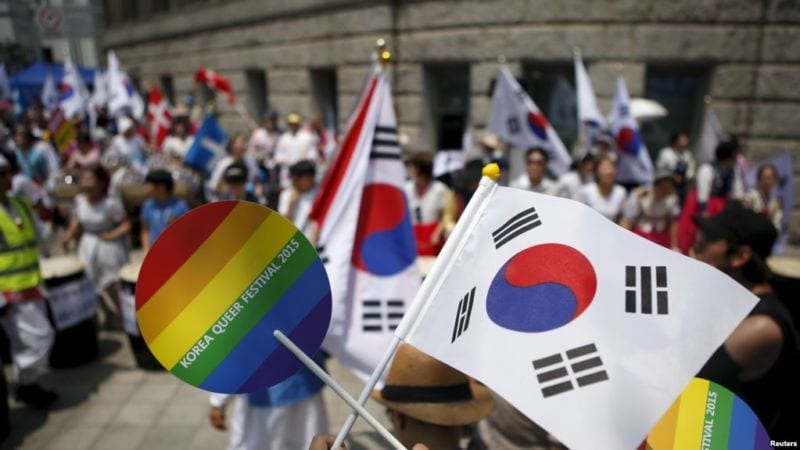 South Korea seems highly modernized from the outside; it boasts the fastest internet connection in the world, has the highest education level in Organization for Economic Co-operation and Development (OECD) countries, and its citizens seem to be naturally born workaholics. But those who have spent some time within the country quickly learn that when it comes to important issues such as welfare, gender equality, and political stability, Korea has absolutely no problem leaving certain matters on the back burner while it continues to maintain a facade of security and strength to its political and economic allies.

Gay rights is one of these matters. Gay marriage and same sex unions are not recognized in Korea and though gay sex is legal, it is highly stigmatised. Much of this is rooted in misinformation. Homosexuality was and often still is depicted as a mental illness within Korean culture, and numerous STDs, such as HIV/AIDS, are blamed on the gay community.

There does seem to a slow shift of attitudes within younger generations, however. Korea Exposé reports that “In 2010, roughly 30 percent of people in their twenties and 20 percent of those in their thirties said they had no aversion to homosexuality; four years later, these numbers doubled. Meanwhile, the older generation — people in their fifties and sixties — remained largely negative.”

However, the problem still remains that homosexuality and gay rights is almost never talked about in South Korea. It is a topic that has only really come to light this year in the Korean media, due to the derogatory statements against homosexuality made by the now president Moon Jae-in during his campaign trail and the ongoing “gay witch hunt” within the Korean army.

Out of the five main presidential candidates in the recent election for the new president of South Korea, only one openly supported rights for the gay community. The other four, which included the current president Moon Jae-in, all made statements against gay rights. During a live broadcast, Moon not only openly opposed gay rights, but also claimed that “gay soldiers weakened South Korea’s military.”

His statement sparked anger, not within the general South Korean public – which remains largely homophobic, but within the Korean LGBTQ community, prompting protests against Moon that bore the slogan “Do you disagree with my existence?” 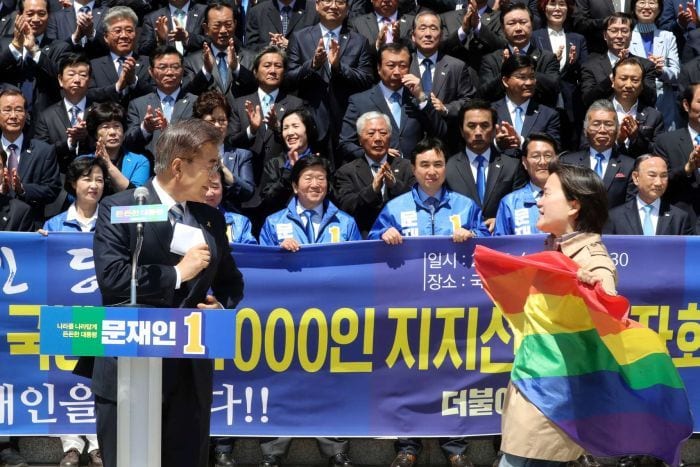 Moon’s statement concerning gay soldiers was in reference to the recent events that have unfolded within the Korean army. In South Korea, all “able-bodied” men above the age of 18 are required to serve a mandatory military service. Earlier this year, a video of two male soldiers engaging in sexual activity sparked a “gay witch hunt” within the Korean army, giving officials the right to detain and question suspects who were thought to have engaged in homosexual relations during their military service.

Though the act of homosexual relations is not deemed illegal in Korea, engaging in homosexual relations during military service (despite whether or not consent was given) is defined as “sexual assault” and punishable by up to two years in prison. So far, one soldier has been charged and at least 32 soldiers are being investigated by military officials.

Rather than directly opposing gay rights and issues in the country, the South Korean government, rather, seems to ignore the subject all together; it regards the topic as a non-issue and this was painstakingly clear when the Korea Queer Festival, which is held on June 15 annually, was repeatedly denied approval from Seoul City Hall this year. The Festival, as a result, has been postponed to take place on July 15, 2017. Ironically, an organized protest against the postponing of the Korea Queer Festival was immediately approved by City Hall.