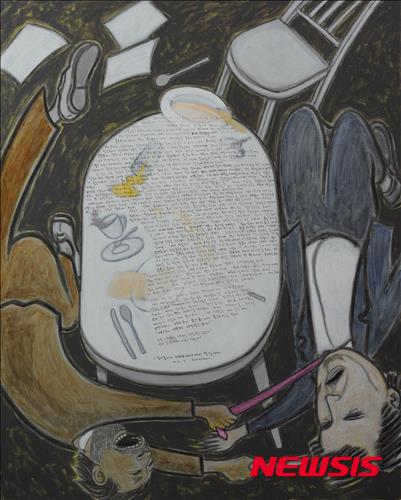 Tuesday, September 8, the Seoul Museum of Art announced its decision to take down the artwork depicting the attack on U.S. Ambassador to Korea Mark Lippert last March. Hong’s artwork had been on display for five days as part of the “Artist Guild Art Fair” before causing a problem.

The drawing depicts two men on either side of a round table. The man in brown, Kim Ki-jong, is pulling the tie of a man in a suit while brandishing a knife. It was, however, not the depiction of the two that proved controversial, but the text written on the table.

The text describes the attack and goes on to talk about broader issues such as the Dokdo islets, comfort women, and aggression between North and South Korea. Hong writes, “It has been long since I succumbed to despair. However, I stayed silent whereas Kim Ki-jong expressed himself with a knife.”

While it may appear that Hong is praising Kim Ki-jong for his actions, he adds, “But I have condemned Kim as a radical and violent nationalist.”

The director of the fair issued a statement apologizing on behalf of artist Hong Sung-dam and conveyed regret that the artwork had generated misunderstanding.

This isn’t the first time that Hong’s artwork has come under fire. One of Hong’s pieces entitled ‘Sewol-o-wol‘ depicted President Park Geun-hye as a red hen scarecrow, criticizing her incompetence in face of the Sewol ferry tragedy. Some have deemed Hong’s artwork an act of terrorism.

You can view more of his artwork here.