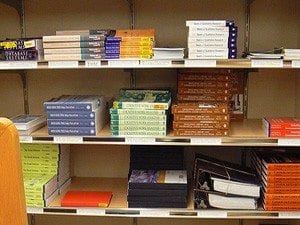 After school tutoring institutions, or “hagwons” as they are more commonly called, are increasingly using American textbooks to teach students not only English, but a variety of other subjects such as American history, mathematics, science and sociology. SBS News recently covered the issue and visited a hagwon in the affluent Gangnam district.

The hagwon operates for elementary school students from grades 1 through 6 and utilizes many American textbooks to teach students. Some parents and teachers have defended the usage, claiming that teaching in American textbooks provides the effect of studying abroad and gives the child the opportunity to learn not only the language, but also the American culture and society.

Yet, there are those that criticize the practice. A professor of education at Sungkyunkwan University commented, “We need to rethink whether this is a smart choice – for children to learn and understand foreign history and culture even before having a proper understanding of Korean history.” This sentiment perhaps reflects that of many Koreans. Historically, the topic of anything American has been met with sensitivity, sometimes even opposition.

Check out the original SBS report below: