A Happy Ending: A Trip to Naksan Beach 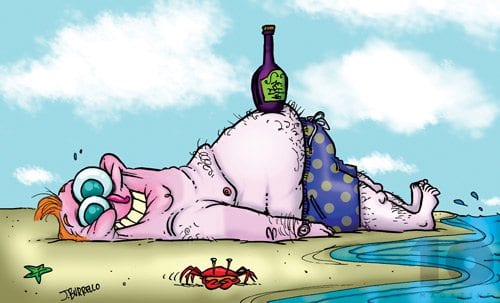 Life in Seoul can be tough on the soul. When I am not hurtling through the subway in a compressed can, I am surrounded by tall buildings and skyscrapers. I often feel claustrophobic and long for open spaces with a clear view of the sky. So when my friend, Peter, suggested a trip to Naksan Beach, I was interested. Peter had been to Naksan before and he waxed poetic about its virtues. “Completely untouched!” he claimed. “Like it’s from the 50s!” I nodded along pessimistically as Peter painted a fantastic picture of fireworks and revelry on the beach: I was convinced that when we arrived, I was going to see grey buildings, millions of phone stores, and the streets bustling with people. But the idea of leaving Seoul was appealing, so we agreed to go. The night before we left, Peter told me that he was bringing “three bottles of wine and an avocado!” He had planned on bringing six bottles, but he had broken three outside a Homeplus.

Upon our arrival at Naksan, we checked ourselves into one of the many hotels the place boasted. Our first act was to open a bottle of wine and drink it out of coffee mugs on our balcony, gazing down at the “Ing Mart” across the street. Next, we skipped over to “Café Le Mer Bleue,” the only decent coffee shop in Naksan. There, the proprietor pointed to my bearded husband, Ben and exclaimed, “You look like Jesus Christ!” We purchased our coffee and wandered across the street, where the beach awaited us. The tide was just coming in and the sound of the waves was satisfyingly loud. I let my feet sink into the sand and breathed in the salty air. In a split second, I decided that we were going to extend our stay.

The rest of our trip comprised of several visits to the corner 7-Eleven to purchase alcohol and then more alcohol. Once, we ascended a hill to check out a temple with one of the largest statues of Buddha in “the Orient” (according to Korea’s tourism website). When the hotel manager discovered we were staying longer, she upgraded us to rooms with an ocean view. In the mornings, we walked to Café Le Mer Bleue for waffles and ice cream. In the afternoon, we hung out on our balcony, sipping gin and tonics, and chain-smoking some impulsively purchased cigarettes. At some point, I discovered Bokbunjajoo, or Korean raspberry wine. I proceeded to drink two bottles worth and spent my time gazing blankly at the ocean. It was perfect and there was nary a phone store or skyscraper in sight. As far as beach trips go, it was packed with nothing to do, no trains to catch or jobs to worry about. When we had finally had enough to drink and turned all our avocados into guacamole, we returned to Seoul, groggy and hung-over after our brief interlude from our dull routines.