A Guide To The Savoury Streets Of Busan 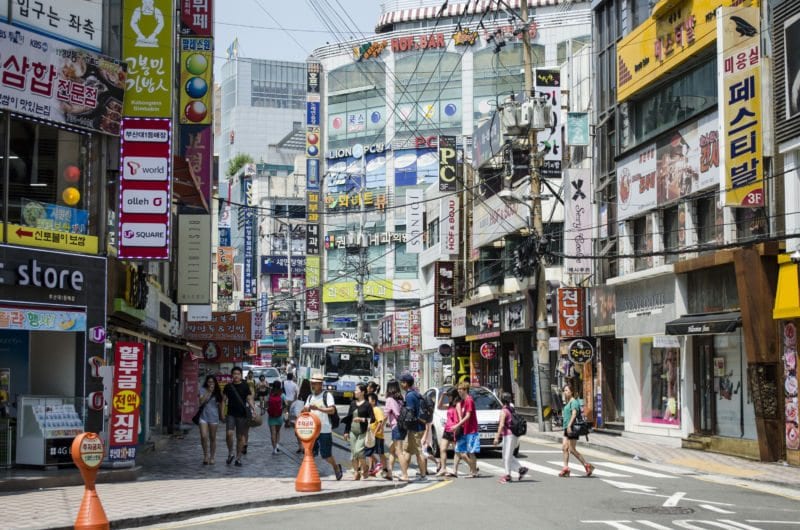 The food scene in Busan is one for the books, namely for its large selection of restaurants and various cuisines. From classic Korean BBQ, to spicy Indian food, and everything in between, here are some of my favourites from Haeundae to Seomyeon (warning: biases included).

It seems like you cannot go wrong with Korean BBQ no matter where you go, but Anga is a different animal. This off-the-beaten-path spot maintains a sort of urban-legend edge to it, as it is rumoured to have the highest quality meat in Busan.

The flavourful marinade and tender pork sizzling over the grill are sure to delight your nostrils as well as your taste buds. Expect a wait around peak dinner times and a slightly pricier menu.

What They Serve: Korean BBQ

How To Get There: Take Line 2 to Jungdong station, exit 5. Walk straight approximately 100 metres, and it will be on your left.

The savory sushi rolls and delicate pieces of expertly-sliced raw fish that hail from the kitchen of Yewon are, simply, to die for. There are several varieties of raw fish to choose from (the salmon is excellent), and you can choose to lightly dip each piece into a wasabi-dominated marinade before letting it pleasure your palate.

Be forewarned, the sushi rolls and sashimi come with a light brush of wasabi in between the rice and fish- if you are not wasabi-inclined, you may wish to mention this to your server.

What They Serve: Japanese-style sushi, Korean-style hoe (raw fish – pronounced like when without the n).

How To Get There: Take Line 2 to Jangsan station, exit 4. Walk straight to Lotte Castle Master #1, and it will be on your right.

This busy expat bar is wildly popular at night (think cheap drinks and killer views of the beach), but during the day they have great pub grub and mouth-watering burgers.

If you’re in the mood for good ol’ Western fare, this is the spot. If you are an adventurous soul, I highly recommend their jalapeno and peanut butter burger. Trust me, the combination is genius.

What They Serve: Pub Grub

How To Get There: Line 2 to Gwangan, exit 2 or 5. Walk to the beach road and turn left at the Lotteria fast-food joint.

Bombay Brau is a tiny beachfront restaurant carrying an unusual but exciting combination of craft beer and Indian food. Bombay Brau is a micro-brewery with multiple locations across Korea (a new branch just opened up in Haeundae), and it serves exceptional Indian food.

Stop in for delicious, homemade naan and tandoori with a Punjab Wheat Beer. If you are a fan of Indian food and craft beer, Bombay Brau is not to be missed.

What They Serve: Indian Food

How To Get There: Just a few minutes walk south from HQ

5. Chun Tak (known by the regulars as Tony’s)

I considered not adding Tony’s to this list just to prevent it from getting any busier, but it can’t be left off the list because of my selfishness. Tony’s caters to the many budget-minded students of Kyungsung University, and it is cheap.

It is the perfect place for a group of friends to enjoy a cheesy kimchi pajeon (the cheese is melted with a blow torch right at your table) accompanied with some makgeolli or someak. Small and crowded with a friendly atmosphere, this grungy yet totally-hip spot is the perfect place to eat away a Friday night.

What They Serve: Tasty Korean food with a twist

How To Get There: Line 2 to KSU, exit 5. Turn left at the Artbox and then take your first right; Tony’s is down the road on your right at the intersection.

Dwaeji Gukbap (Twin Pork Soup) is a delicacy native to Busan. Simply put, it is a soup made of hearty pork bits, rice, broth, and is served with green onions and a spicy red pepper paste.

This particular eatery has a constant lineup owing to its neat taste and exquisite flavour. Of course, expect a lineup- but it’s worth it. Price ranges from 5,000- 7,000 won.

How To Get There: Line 2 to Dayeon, exit 3. Walk straight for about 5 minutes; it will be on your left.

I don’t think anyone knows what this restaurant is actually called- it is easily recognizable due to its spotlight-stealing wooden phallus just outside the patio. A friend of mine mused that perhaps it was not made to look like one- I doubt that very much, but I digress.

Aside from the “photogenic” exterior, this place serves up some deliciously flavoured makgeolli (go for the blackberry) and a whole slew of excellent traditional Korean foods. The pajeon is great, and the mussels are even better.

To top it off, hop over to the 3 Monkeys brewery just down the road for a superb selection of craft beers and a gigantic chess board to play with, should you wish to bring out your inner nerd.

What They Serve: Terrific makgeolli and traditional Korean delicacies.

Ssiat Hotteok is the classic Busan street food. Hotteok is a sweet, fried pancake with a brown sugar and cinnamon filling, best described as the love child of a doughnut and a cinnamon roll. While classic hotteok is good all on its own, ssiat hotteok ups the flavour game with a generous helping of pumpkin seeds, sunflower seeds, and pine nuts.

The addition of seeds is said to be good for your health, but let’s be real here- you aren’t eating a hotteok for your health. Find hotteok stalls all around the city but more easily around BIFF square in Nampo-dong.

In conclusion, the vast array of delicious restaurants and food stalls makes Busan one of the most palatable cities in Korea. If I had to name the absolute best place to eat, I’d have to say homemade French toast in my apartment… I warned you that there would be biases.