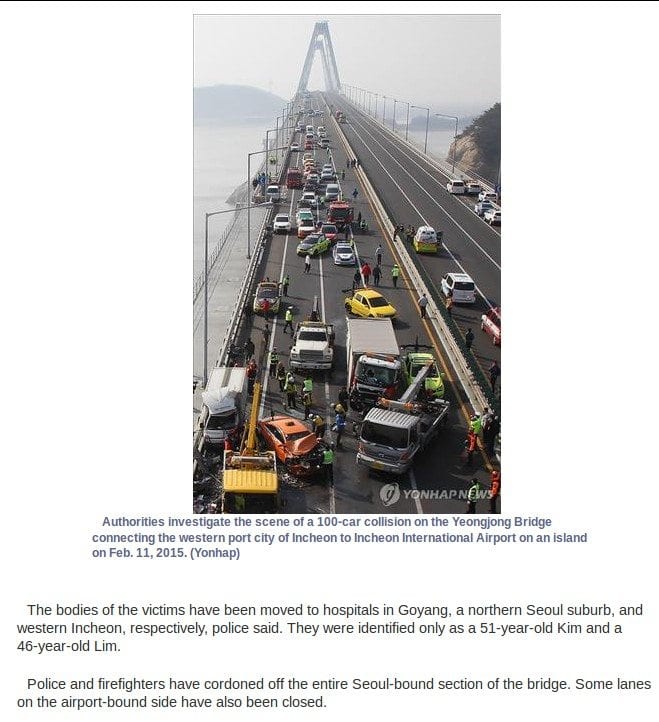 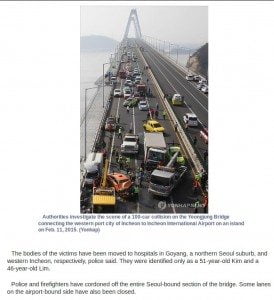 There was a massive 100-car pile up on Incheon’s most famous bridge, Yeongjong Bridge. Both Yonhap News and BBC News are reporting that 2 people have been killed and dozens have been injured in the accident. The original cause of the pile up is under investigation, but authorities believe that the accident started in 3 places and are attributing at least part of the cause to the foggy road conditions. Many planes were delayed this morning due to  poor visibility this morning too. While the fog likely played a role, poor driving practices may also have influenced the outcome, as Korea lays claim to the most dangerous roads in the OECD.

Yeongjong Bridge (영종대교) is perhaps one of Incheon’s most famous landmarks, particularly considering that it is one of only 2 bridges that connect the island that is home to Incheon Airport, Yeongjong Island, to the rest of the mainland. Anyone who is headed to Seoul and all the public transportation available there takes this bridge. If you have travelled through Incheon Airport, then you likely took this bridge to the mainland.