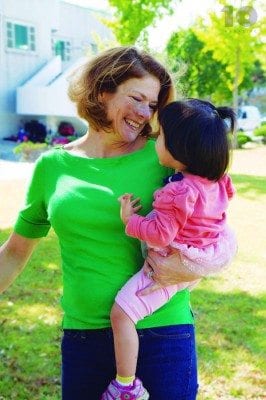 Few people in the world can lay claim to having done as much volunteer work as Christine Saia. Her organization, Christ’s Joy, currently provides donations of new and gently used clothing, baby needs, food, and household items to several orphanages in Korea and the Philippines, two women’s shelters, a migrant worker center, and PHILKOR, which supports the needy in the Korean/Filipino community here in Korea. Twice a month, Christine loads her vehicle with cleaned and sorted donations for her Wednesday deliveries and pickups. Starting in Pyeongtaek, she logs an average of 200 km in one day dropping off and picking up donated items from Seongnam, to Guri, to Seoul and back.

Christ’s Joy also provides weekly volunteers to assist staff at several orphanages, English class twice a month at an orphanage in Seojeong-ri, and dinner and visits to a home for unwed moms in Yong-In.

The funny thing is, you’d be hard-pressed to find anyone more positive and upbeat than Christine Saia, despite the fact that she is dealing with depressing situations almost daily. She is full of energy and always wears a smile, making her living proof that people who volunteer are happier than those who don’t.

1. You’re not Korean are you? Where are you from?
No, I am an American but will always have a special place in my heart for the country and the people of Korea.

2. How long have you lived in Korea and what brought you here?
I came to Korea ten years ago with my husband, then a U.S. soldier stationed at Yongsan Army Base.

3. How did you get involved in volunteering originally?
Like a lot of folks, I was raised in a volunteering family. My parents were very active in our community and church so we were all volunteers from a very young age; babysitters, thrift shop workers, parking lot attendants, etc. We could bring a lot of labor to the effort as my folks had twelve children and because all our friends’ families did the same, it was a normal part of life to do something for someone else for no payment. While in Korea, I have volunteered with the AWC, the AFSC and SIWA, but my great passion is for the children.

4. What sorts of projects do you have going on this year for the holiday season?
This year is going to be our busiest year yet. We will provide Christmas gifts, stockings and parties to over 300 children in orphanages throughout Korea, approximately 40 unwed moms and their babies, and as many in the migrant community as our donations allow. We work with hundreds of volunteers across Korea and even in the U.S. who send items here as they are needed. We will have folks sewing handmade stockings for 130 disabled children, other folks will stuff the stockings, wrap gifts and prepare cookies and treats for the festivities, and still others will be there to host the parties and present the gifts.

5. What are the organizations that you normally work with?
Through Eastern Social Welfare Society, Catholic Charities, PHILKOR and the Guri Migrant Worker Center, I work with eight facilities which support orphaned children, unwed mothers and migrant workers who seem to be at the greatest disadvantage here in Korea. We have also just sent our first shipment to a facility for the poor in the Philippines.

6. How do you make sure that they are reputable organizations?
The groups I work with are all registered with the Korean government as approved charitable organizations. Most receive little or no government support and some rely entirely on the kindness and generosity of private donors, particularly those involving immigrants.

7. Who are your donors and where are they from?
Our donors are military families, teachers, businessmen and women living in and outside of Korea. They are practicing a concept I like to call “Releasing the Extra,” in that everyone has extra something; love, time, clothing, food, money, smiles, etc. Releasing that extra does several things. Firstly, your “extra” becomes someone else’s “enough,” a pretty powerful thing on its own. Secondly, releasing your “extra” gives you an immediate sense of goodwill and happiness that you could be part of the answer for someone else. Finally, releasing your “extra” reminds you of the gratitude we all can feel throughout the year for the good life we are fortunate enough to enjoy.

8. What “extra” do you feel is most needed here ?
I arrived in Korea when the economy was doing reasonably well. Over the last ten years, the economic picture has dimmed and austerity measures have impacted the donations and subsidies these charities need. Now I generally tell donors that rice and diapers are amongst the best ways to help. Providing the basics allows the charities to be more flexible in their own budgeting. An example of this was made clear to me by one charity who said that they could not budget confidently for expensive yet needed fresh fruits and vegetables until they were certain to have funds for rice, as rice is the basis for every meal. None of the charities I work with actually request anything except the basics; clothing, food and diapers.

9. What can companies or groups do to help?
Often companies have funds available for donation but are unsure where to donate. Last year we had a laundry crisis at the Babies Home in Seodaemun in that the two old commercial dryers died within a few weeks of each other. We were able to reach out through SIWA and others to CH2M Hill and Infineon Technologies, each of whom contributed the 7.5 million won and more to have the dryers replaced. Sponsoring a material need is a great way for companies to actually see their money at work. We had a similar experience at Pyeongtaek Welfare Town, where they were in need of wagons to take the toddlers outside in groups. In one week, our donors ordered and delivered four toddler wagons.

10. What ways can people volunteer their time if they want to?
Currently, there are volunteer opportunities in Seoul at the Babies Home in Seodaemun where our volunteers hold, feed and diaper babies who are awaiting adoption or foster care. Our aim is to support the staff while sharing our time and love with the babies. The home typically has approximately 50-60 babies at any given time. For those outside of Seoul, there are toddler play time opportunities at Pyeongtaek Welfare Town and our English classes in Seojeong-ri.

Anyone interested in participating in these volunteering opportunities can email Christine at: mrssaia@aol.com or reach her organization through their Facebook page: Christ’s Joy.