10 Of The Weirdest Korean Wikipedia Entries 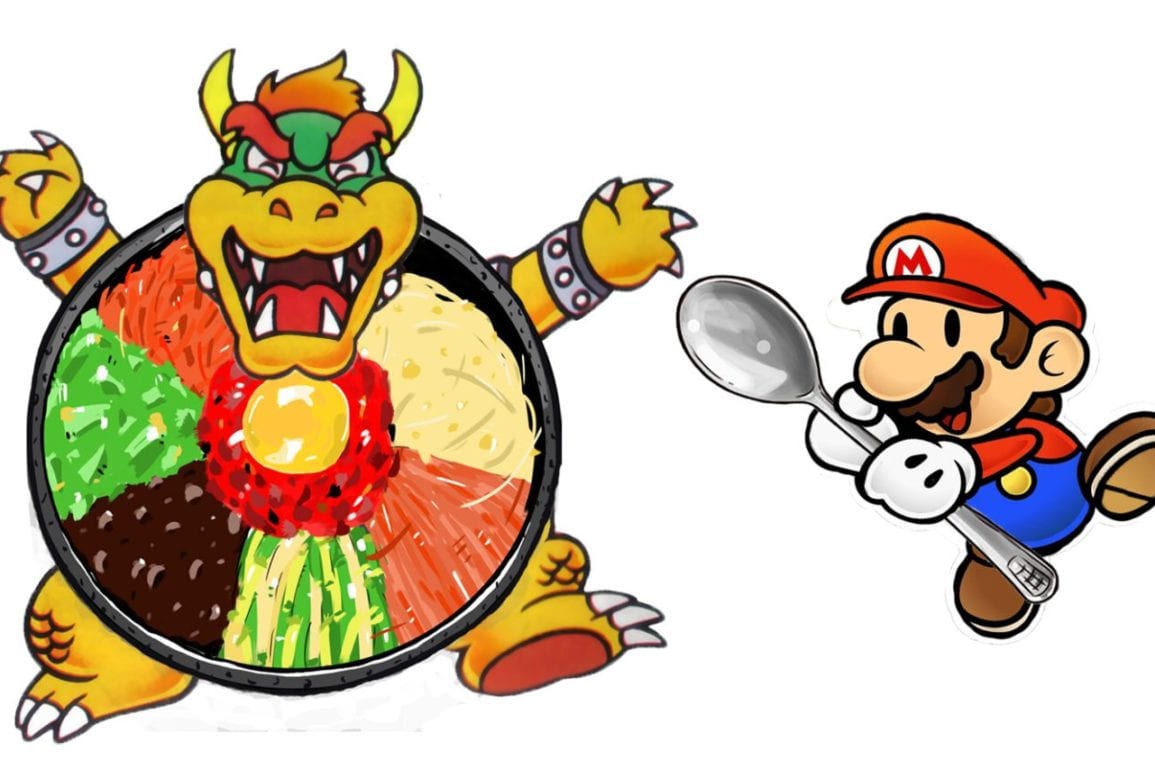 Wikipedia is a fountain of dubious, useless, and baffling knowledge on any front, but today we run strictly down the rabbit hole of Korean Wikipedia trivia. And believe us, it runs deep. Here are just 10 tidbits, from gross to geek-tastic. 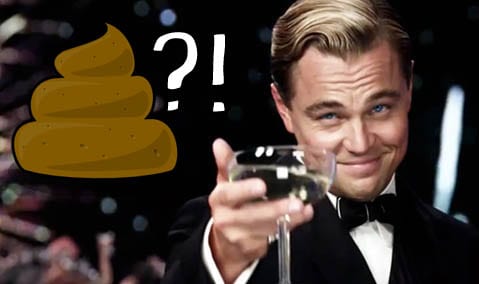 Ah, the legendary Korean poo wine. With poop-shaped pastries, a toilet culture museum, and a kid’s doll famous for farting, it’s not that much of a stretch to know this exists in Korea. Wikipedia assures us that while simply mixing liquor and poo is one way to concoct the brew, there’s a slightly more elaborate way. Bamboo can be settled into a pot of excrement and alcohol to ferment, after which an extracted liquid forms the liquor.

9. Bowser, King of the Gukbaps? 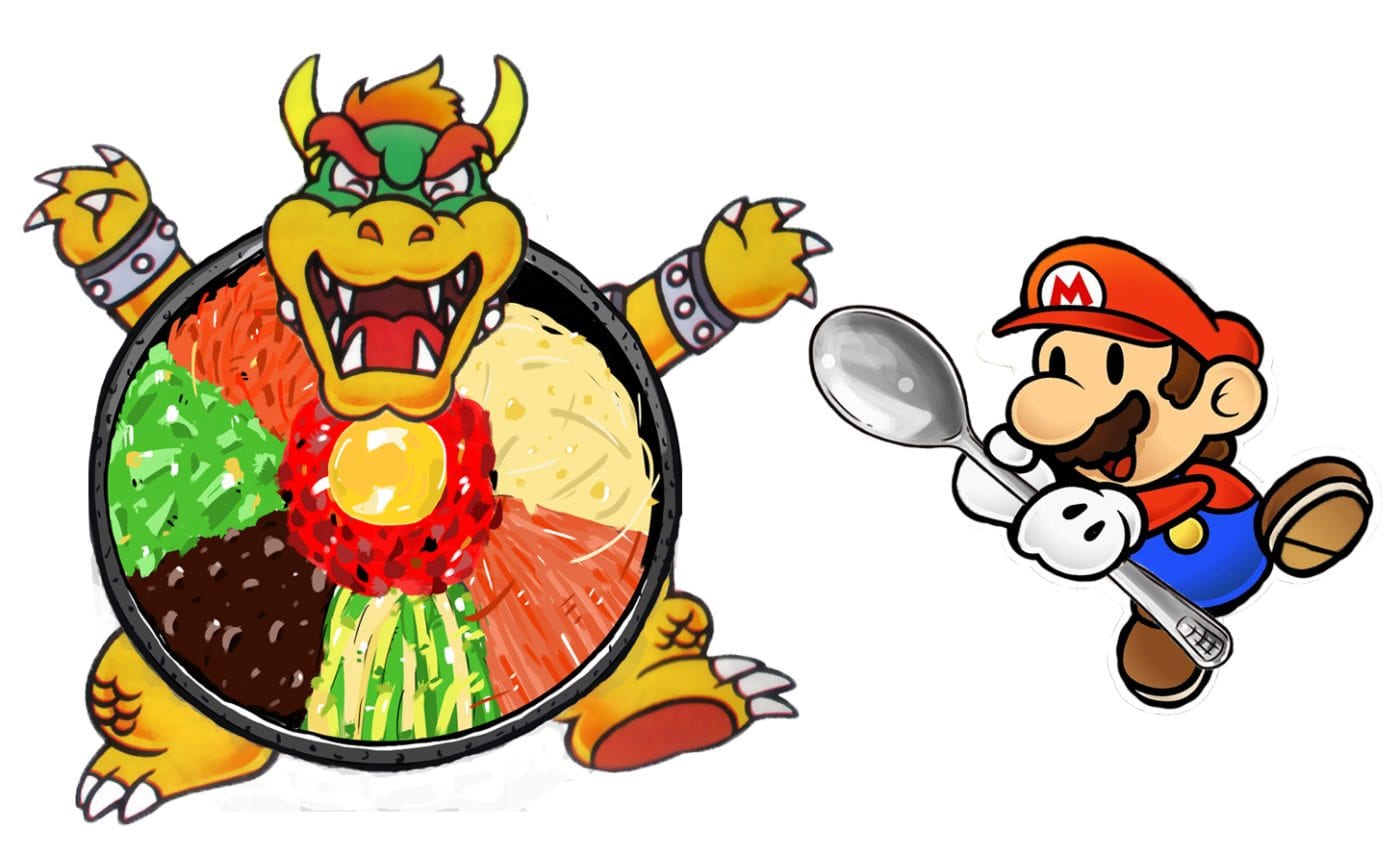 While not exclusively a Korean article, the Wikipedia low-down on Bowzer, the Koopa King of Mario Brothers fame, has a nerd-tastic bit of Korean trivia nestled in.

Apparently, the “koopa” half of Bowser’s kingly title comes from the Japanese word for “gukbap” (kuppa), the beloved Korean stew.

Even better, they originally considered using words for other Korean foods, including yuk-hoe and bibimbap, to label the legendary villain and his turtle-shelled minions. Could a little of the Korean-Japanese feud be brewing underneath these baddies?

In any case, this trivia bit is sure to delight your inner video game nerd or up your Korean geek-cred. 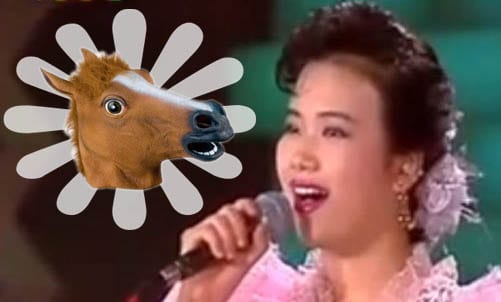 To throw in a little North Korean flavor, we give you Hyon Song-wol, a North Korean popstar whose most popular hit is called “Excellent Horse-like Lady.” This upbeat ditty praises hard work and the Dear Leader, but the video itself is sadly lacking in horses. Rather, we get an eerily happy factory girl and lyrics like these:

“They say I am a virgin on a stallion
Mounting a stallion my Dear Leader gave me.”

Rumors abounded in the past about Hyon’s affairs with Kim Jong-un and Kim’s alleged execution of the singer for making “pornographic” videos, but it was later revealed that, like a true horse-like lady, she lived on.

7. “My Girlfriend is a Nine-tailed Fox” 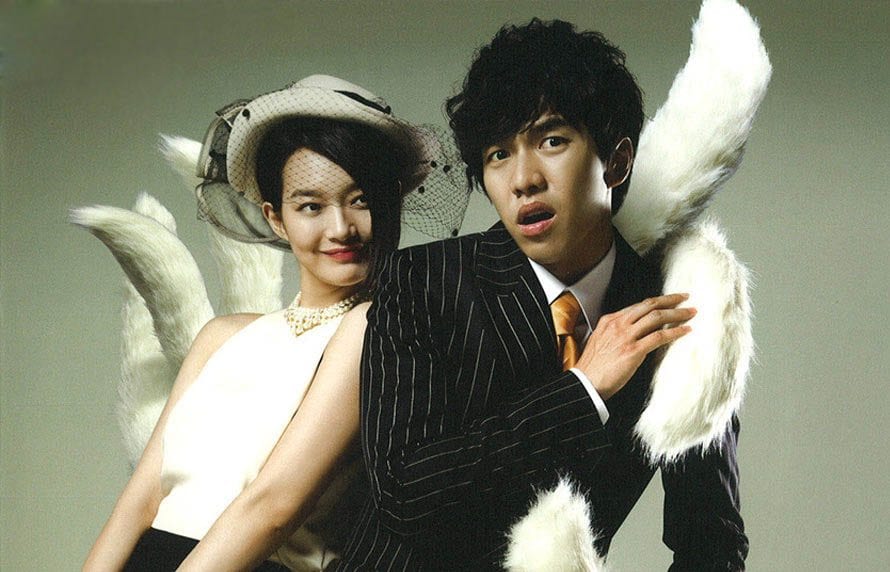 “Cha Dae-woong (Lee Seung-gi) is a normal college student, with ambitions of becoming an action star. Until one day, he accidentally releases a gumiho (Shin Min-ah), a legendary fox with nine tails who was sealed inside a painting. … According to myth, gumihos eat men’s livers, so Dae-woong is scared out of his wits, and the gumiho takes advantage of his fear by sticking by his side.

He names her “Mi-ho,” and keeps her happy by buying her beef and hiding her true identity. Mi-ho wants nothing more than to become human, so they strike a deal: she’ll lend him her mystical fox bead so that with his increased speed and strength, he’ll be able to do difficult stunts, and in exchange he’ll help her become human.” (from Wikipedia)

Apparently the idea was just ridiculous enough to work, as the 16-episode series won awards for both lead actors and aired internationally (even on Netflix!). 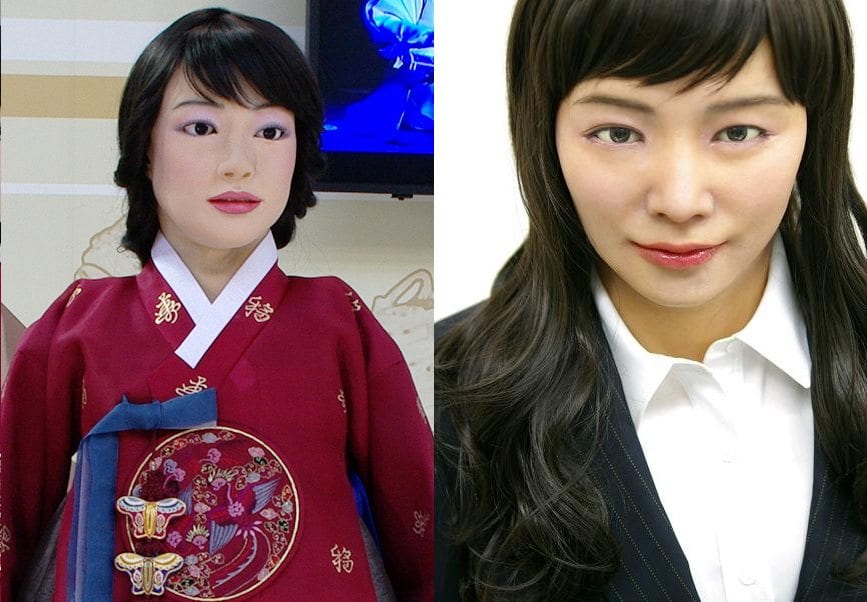 Well, if the tambourines weren’t enough, these would be a great addition to your next singing room party.

The EveR android line (a name devised by combining “Eve” with the beginning of “robot”) premiered with its creepily humanlike silicone jelly skin in 2003. EveR-1 had a range of emotions and the know-how to respond to certain words in English and Korean. Wikipedia also shares that the original model would “show displeasure if you poke her.” Duly noted.

Later versions of EveR evolved with various capabilities: EveR-2 could express boredom and lip-sync to a Korean ballad. EveR-3 was mobile and acted in a stage performance as a robotic Snow White.  And EveR-4 had an artificial tongue. The future is now.

EveR even had her own Japanese rival, Actroid, though creators initially deemed EveR better due to her ability to make eye contact. 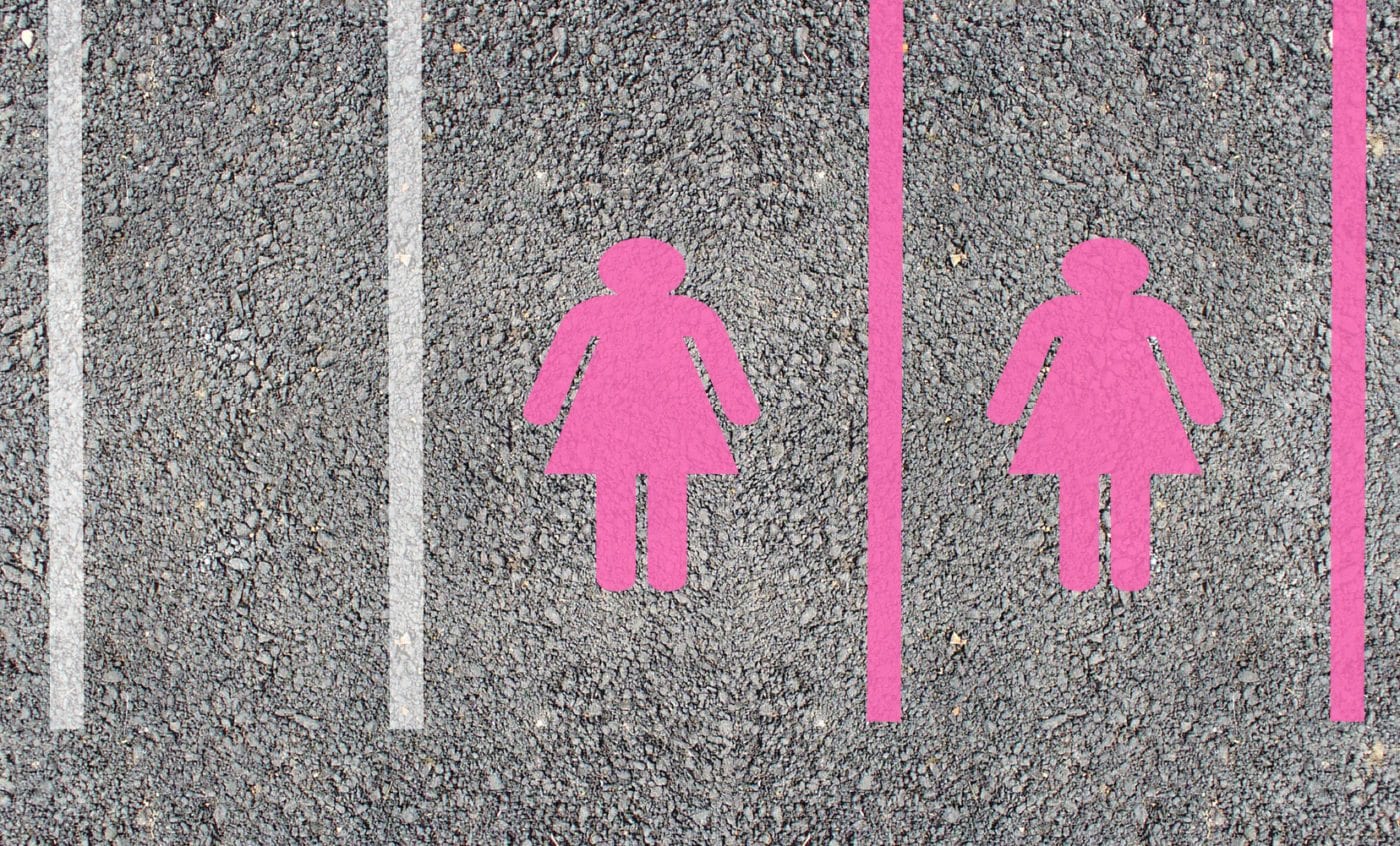 It’s no secret that women don’t have the best standing in Korea: As of 2013, there was a 36.3% gap in wages between women and men in the country as well as the worst glass ceiling index in all of the OECD.

One dubious advancement put forth in recent years, though, has been the addition of female-only parking spaces. The pink-toned “she-spots” (a government-chosen term) are typically wider and marked with the icon of a skirt-wearing woman. It is said that these spots are meant to benefit women in high heels, so they don’t have to walk as far.

Whether this is the kind of advancement women really need, though… well that’s another story. 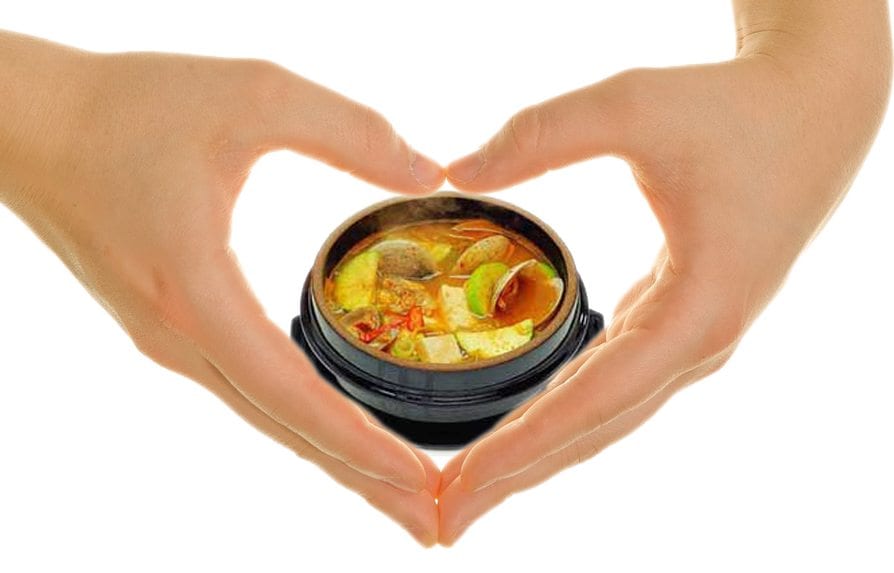 Many who have studied Korean or had Korean friends will have heard this Korean slang phrase before. It refers to the kind of woman or girl who would sacrifice the quality of basic items, like food, in order to impress others with more conspicuous forms of consumption.

Doenjang jjigae is one of the cheapest foods (unless you’re going for convenience store kimbap). The idea is that skimping on meals by eating something like this would allow such a girl to live large by, say, having a drink at an expensive coffeehouse.

It doesn’t exactly evoke the most pleasing image, but there are a lot worse things a girl could be called (see the Konglish-heavy Wikipedia entry on “bosulachi”).

Did you know that, besides his iron-fist ruling and his alleged ability to control the weather with his moods, Kim Jong-il produced a North Korean Godzilla movie?

Actually, in 1978, Kim had South Korean film director Shin Sang-ok kidnapped along with his wife and brought them both to Pyongyang to make propaganda films. Throw in Kim’s love for Godzilla movies and a vague metaphor for the evils of capitalism, and what you get is Pulgasari, a delightfully campy kaiju flick set in the Goryeo era. Pulgasari starts as an adorably fake little doll that munches on metal and grows to a gargantuan size for the Power Ranger rumbles later in the film.

This 1985 treasure is sadly also the last film Shin directed in North Korea before escaping to the U.S. with his wife.  Somewhere, Pulgasari weeps. 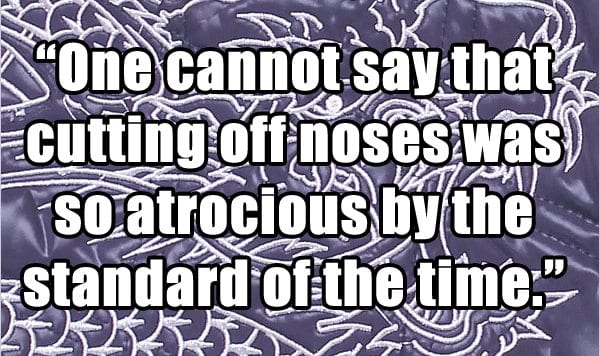 Words once inscribed on the largest “nose tomb.”

Buckle in, this one will get a bit grim.

The above phrase was formerly an inscription on a Japanese shrine called The Mimizuka. The shrine’s claim to fame? It houses the severed, pickled noses of 38,000 or more Koreans killed in Japanese invasions… supposed war trophies from a very dark time. It’s hard to say what’s weirdest:  the fact that this place exists, that it actually translates to “Ear Mound” rather than “Nose Mound,” or that it’s not even the only nose tomb in Japan.

Korean monks have performed ceremonies to release the souls housed in those noses and efforts have been made to have the shrine or its contents moved to Korea, but no dice. It remains a national treasure in Japan, though guidebooks understandably shun it and natives are unaware of it. 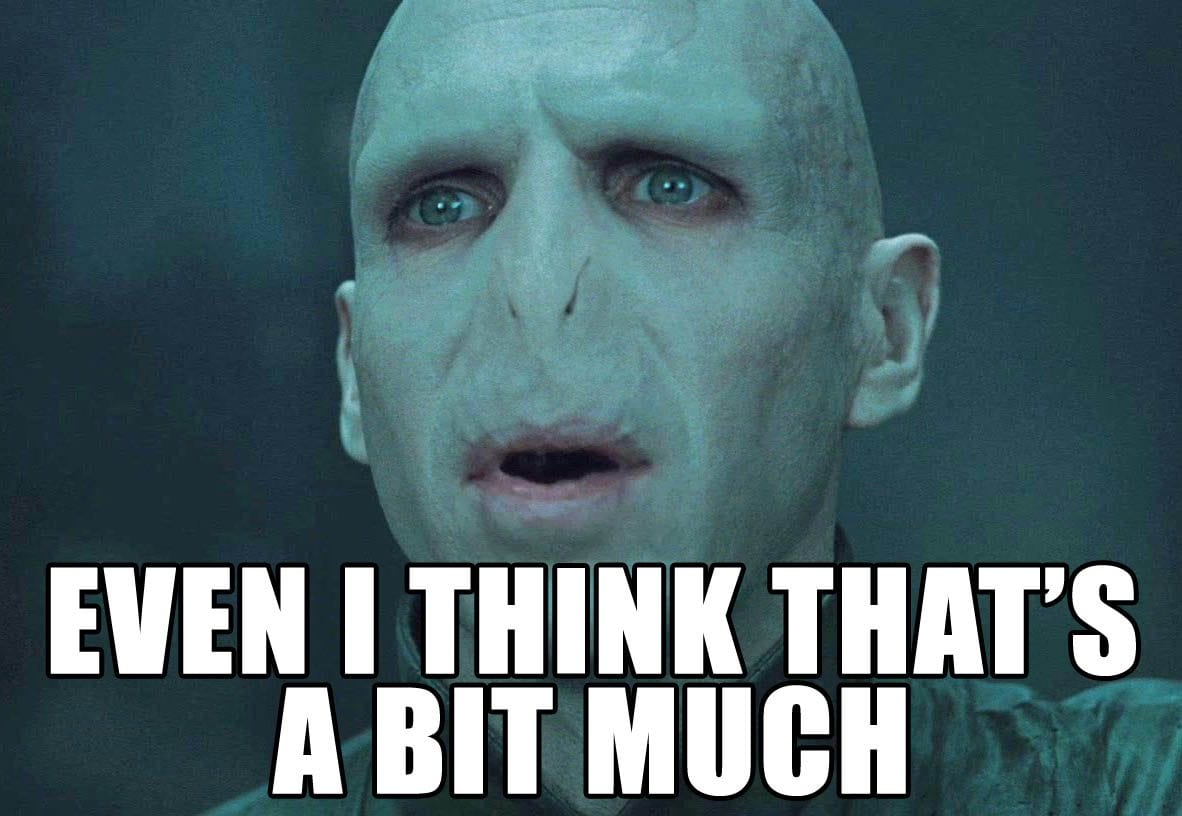 While not something you’re likely to encounter every day in Korea, gaebul surely makes most people do a double-take.  Also called “penis fish,” “spoon worm,” or “fat innkeeper worm,” it certainly does appear as a salty, wriggly doppelganger of something in the male nether-regions.

Those brave enough to eat it have comments that it tastes somewhat like clams, has a rubbery or latex-type texture, and squirts little gushes of salt water into the mouth when you chew it. Mmmm… 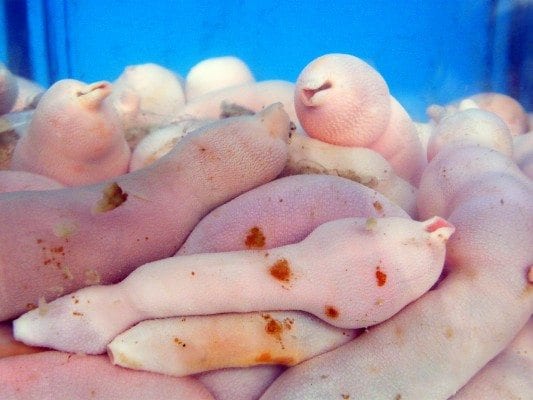 And there you have it. With all this Korea-specific wackiness in mind, what have we missed? If your late-night Wikipedia clickholes have shown you anything else worth seeing, feel free to pass it along in the comments.