Koreans have a knack for taking popular Western dishes and transforming them into something new and bizarre. Like fried chicken. Some of these Korean fried chicken dishes are (arguably) tasty; others are downright strange. Regardless of how they taste, they are all unique eats, and you can get them through delivery from a Korean fried chicken restaurant near you.

No, you did not misread that. And it’s not something you’ve tried before, like orange chicken, which was apparently an inspiration for this…delicacy. Korean fried chicken company Mexicana Chicken has recently begun serving so-called ‘Fruit Chicken’, aka fried boneless chicken covered in candy-colored powder that is probably laced with artificial flavors. As of now there are three different flavors: banana, strawberry and melon, in bright colors of yellow, pink and green respectively — which explains why people have taken to calling it ‘stoplight chicken.’

According to the Mexicana Chicken website, this bright yellow fried chicken apparently tastes like Banana Kick, a Korean snack that tastes just like bananas — according to the packaging, anyway.

The website says that this pink stuff tastes like strawberry milk — I’m guessing they are talking about the strawberry flavored milk sold by Korean food company Bing-gu-leh (빙그래). Which probably means it tastes nothing like real strawberries.

This one apparently tastes like Melon Bar, a melon-flavored popsicle popular in Korea.

This is nowhere near as disturbing as the fruit chicken, but it’s still a little odd. It’s featured on the menus of chicken companies such as Kyochon Chicken. The skin of the chicken is embedded with rice grains. Trypophobes, beware: it looks somewhat like fried chicken with a bad case of white zits or smallpox. 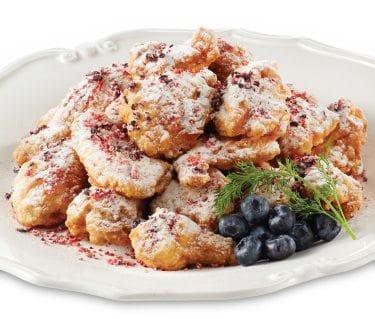 Another fruit and chicken dish — though to me these look more like irregularly shaped scones coated with powdered sugar and bits of fruit. (I’m not sure what that white stuff on the chicken is, but this is Korea — I don’t think it’s unreasonable to assume that it really is powdered sugar). ‘Berry Ring’ is flavored with a sweet ‘harmony’ of butter, blueberries and strawberries. Apparently it doesn’t taste too bad — a customer on BBQ Chicken‘s website gave it five stars and said it tasted like Dunkin Donuts. 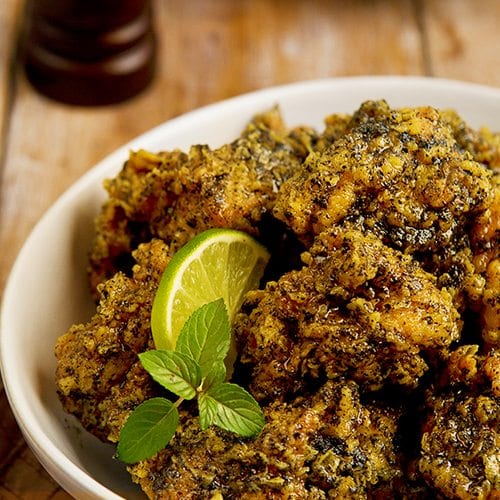 In its oriental flavors category, Nene Chicken has included heuk-im-ja (aka black sesame seed) chicken, which explains the meat’s dark color and the mysterious black specks in this photo. Heuk-im-ja is used in a variety of Korean foods, such as porridge and rice cakes. 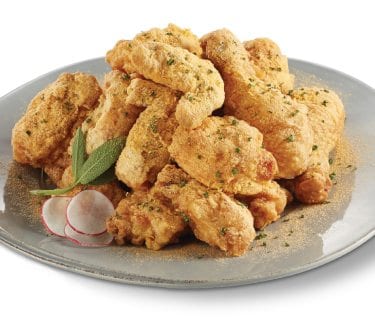 Not exactly fried, but it’s served at fried chicken companies like Nene Chicken as an accompaniment for regular fried chicken, coated with a red, spicy sauce. Chicken feet may be an oddity to most Westerners, but it is relatively common in Korea and other Asian countries like China. 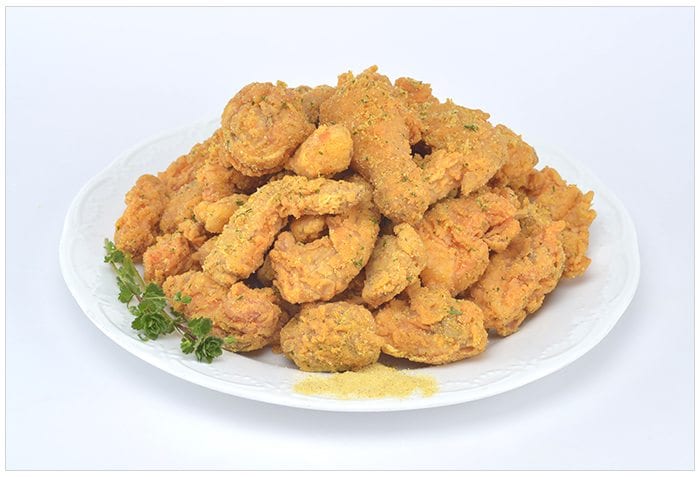 Fried chicken covered with curry powder. No curry sauce, from the looks of it. Available at restaurants like Mexican Chicken.

“Where’s the chicken in this photo?” you may ask. Good question. It’s the yellowish green stuff at the left with the lemon slice. According to the menu description it’s ‘green dress chicken’, and apparently the ‘green dress’ has something to do with spinach. Available only at BHC Chicken, served with a side of ricotta cheese salad, bread and cheese balls.