Korean cuisine includes anything you can think of, and some things you might not think of. Korea has always been a difficult land to raise food in, with rocky terrain and harsh seasons that limit the growing season. Also, if you give a culture 5,000 years to experiment, you might guess that everything will be tried at least once, and so it seems to be with Korean food, which stretches over a wide range of territory, from the mild and inoffensive to dishes that some visitors find bizarre. 10 Magazine has collected descriptions and photos of some of these uncommon foods, and we explain them here in the order of their bizarreness – but all are worthy of being sampled by Andrew Zimmern.
Remember that while these foods may be fun to gawk at, they can also be a pleasure to eat. Along with our mostly matter-of-fact description of the ten foods, we’ve collected opinions from non-Koreans who enjoy eating these dishes. Let their example encourage you to get out there and try the ones that sound interesting. You may just find that you like them.

Chicken feet may seem bizarre to some, but they have actually been a staple food in many cuisines including those of the Middle East, Peru, and the southern United States. Chicken feet are not considered part of a meal, and are best enjoyed in a pochangmacha (포장마차 tent bar), accompanied by good friends and a bottle of soju. Chicken feet are usually chewy (they can be served bone-in, or boneless), and the accompanying sauce is often scorching hot. People who are initially worried about eating chicken feet are often converted to people who are afraid their tongues are going to explode into flames.

I love almost everything that is doused in hot red sauce so why not dalkbal? After overcoming my first foot and its chewy yet crunchy texture, it wasn’t bad at all. As a plus, it’s healthy, containing collagen and minerals, so put the red sauce on and enjoy!
–Birgit Rappold, Seoul

Koreans say that no part of a pig should be thrown away, and so it is no surprise that pig skin is a traditional Korean dish. It’s usually barbecued and is a bit rubbery, quite fatty, and occasionally served with some pig hair intact. If you can get past that, you eventually realize you’re just eating pork rinds/cracklings/scratchings, and you can enjoy the rich, nutlike flavor and delicious high-fat content of the skin. Some even claim that the collagen in pig skin can smooth the skin of the humans who eat it.

Ordering pig skin at a Korean restaurant is your ticket to a dining experience like no other! Each slab of oversized “bacon” is grilled in front of you, which fantastically caramelizes the meat. Each bite consists of a crunchy, and yet delightfully chewy consistency. –Julianne Taylor, Seoul

Gopchang is the well-cleaned and fried intestine of cows and pigs. This is served in a variety of ways, with one of the most common being as barbecue in the traditional Korean style. It’s also served in bokkeum (볶음 stir fry) and stew. Some people find a bit of a squick factor in eating intestines and the gopchang can be quite chewy. As it can be ordered with other barbecued meat, a newcomer to the dish can eat a little bit of it to become accustomed to its texture before diving in wholeheartedly.

During my time in Korea, I’ve eaten lots of things I’d never seen before, but this is one meal that I enjoy for the flavor as well as the novelty. Plus, since there are millions of people in other countries neglecting to eat cow and pig intestines, I’m doing my part to make sure nothing goes to waste.
-Tyler Watson, Seoul

Seonjitguk is a much-loved form of haejanguk (해장국), or hangover soup, which is consumed after overindulging in alcohol. It includes cabbage and a variety of other vegetables, but what makes this soup unique is another ingredient – congealed ox blood. The blood, nearly dried, sits in the soup as chunks or sometimes one enormous hunk. While it doesn’t taste that odd, its texture is a bit unusual. The first time I had seonjiguk I tried to eat an enormous chunk all at once, and it was nearly impossible to swallow – be sure to use your chopsticks to break the congealed blood into smaller pieces!

I can’t eat big buckets of it, but I have grown to enjoy the sticky texture and proteininess (invented a new word there) the clotted blood pudding lends to a steaming bowl of soup. It’s extreme “man food.”
-Joe McPherson, Anyang, Gyeonggi Province

Sundae is another of the “bizarre” foods that really isn’t that bizarre. In fact, one way of thinking about sundae is that it is to Korean food what haggis is to Scottish food. It’s made by stuffing pig intestines with a mixture of blood, rice, green onions, pork and noodles, and then steamed. This is a popular street food and is typically served in bowls and eaten with chopsticks or toothpicks. Like most sausage-type foods, the difference between good sundae and bad sundae is vast, and it’s worth it to try to find the good stuff.

As with many Korean foods, an English explanation hardly does it justice. But on a plastic chair in Gwangjang Market, surrounded by drunken ajosshis, with a bottle of soju and some dipping salt, the meaty, hearty flavors of sundae can give you one of those pinch-yourself dining experiences that Korea rarely offers.
-Andrew Smith, Bucheon, Gyeonggi Province

The Korean name for chicken gizzards is literally translated as “chicken poo house,” which should be enough to startle anyone contemplating eating them. But don’t worry – they really are only gizzards, and they really are quite good. For what it’s worth, gizzards are eaten the world over, including much of South East Asia, Haiti, and in the

United States. In Korea chicken gizzards are usually served stir-fried and are very popular as a form of anju (food to accompany drinking).

The first time I tried dalkttongjip was in a pojangmacha in the gritty neighborhood of Singeumho. Among the Korean foods sampled by Anthony Bourdain on his Korean episode of No Reservations this is the only dish that he doesn’t like, though it’s my opinion that chicken gizzard is one of the best Korean meat and sesame oil combinations. -Matthew Crawford, Seoul

Sannakji is octopus that is cut up while still alive and eaten immediately, typically seasoned with sesame oil. Watching the nakji on your plate is the first bizarre part of this food as some of the dismembered pieces run for the edge of the dish, while others clump together, looking for all the world as if they are trying to reassemble. Sannakji should be eaten with care, as the suction cups on the tentacles continue to function long after the octopus is cut up and each year there are reports of sannakji chokings.

In the film, Oldboy, Oh Dae-su escapes prison and “wants to eat something alive,” so he bites into a live octopus.  Sannakji is the perfect opportunity to understand our human condition and that every day we take life to live our own. Squirming octopus tentacles may be scary, but I encourage everyone to enjoy this exhilarating experience. -Aaron Carr, Gwangmyeong, Gyeonggi-do 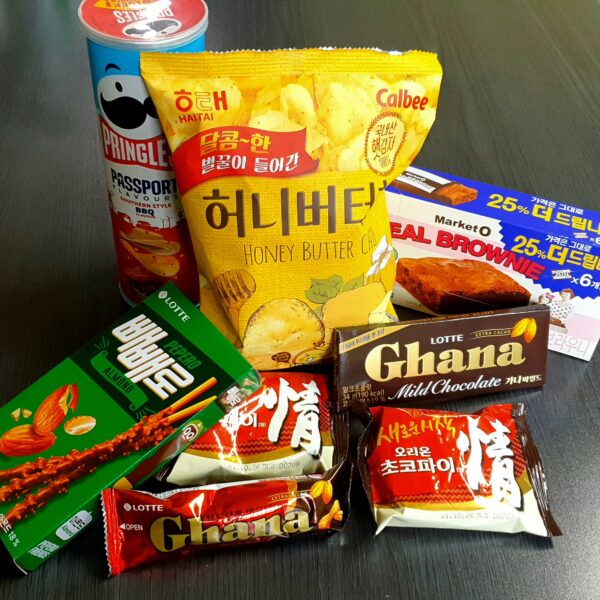 Dog meat is a controversial food, both because of the animal involved and because of the treatment of some dogs raised for food. However, it is a traditional Korean food, normally served as bosintang (보신탕 dog stew) and suyuk (수육 slices of boiled dog meat). Bosintang is often consumed in the heat of summer, the so-called “dog days.” The closest taste comparison is probably goat or lamb, and dog meat is normally served only in restaurants that specialize in the dish.

Boshintang (보신탕) is a typical Korean soup with a controversial ingredient: dog meat. But don’t you worry: lap dogs are spared and those that are consumed are a specific breed raised on farms. The meat’s consistency is like a combination of beef and duck and when it comes to the flavor, it soaks up the gochujang and perilla seed powder nicely. -Troy Zitzelsberger, Seoul

Steamed silkworm pupae (bug larva, if you really must know) are sold primarily on the streets. If you live in a bigger city you’ve no doubt walked by enormous vats of the stuff and scrunched up your nose as you hurried past. Beondegi has a taste somewhere between nutty and bottom-of-a-tennis-shoe, and they offer an alarming explode-in-your-mouth sensation when you bite into them. Some Korean convenience stores sell beondegi in cans, but why settle for stale tennis shoe when you can go downtown and get the fresh stuff?

While many people know beondegi as a prodigious supplier of protein, these little larva also provide an energy boost and aid in metabolizing alcohol.  I enjoy a cup of the bugs before a rigorous hike or when I want to impress my Korean friends. -Ira Sairs, Suwon

Eating fermented skate can be a daunting task. Skate excrete uric acid through their skin. When a skate is fermented, this uric acid converts into ammonia. Yes, ammonia. Hongeo also has a tough consistency, something like rubber with crystals in it. Still, it’s a dish much beloved in some quarters, particularly among harabeoji (할아버지 grandfathers) and in Jeolla-do, where some consider it a delicacy. Hongeo is usually ordered as part of samhap (삼합), a combination of samgyeopsal, kimchi, and skate. If you are ever confronted by this, your eating strategy should include lots of pork and kimchi. As with any Korean food I’m not that keen on, I normally line it up like this: skate (or other dubious food) in front, gochujang behind that, soju shot behind that, beer glass behind that, and water glass behind that. After liberally soaking the skate in gochujang I chew and eat it as quickly as possible, then shoot the soju, drink the beer, and chase it with water.

Although the taste is nothing to write home about, Hongeo gives you a slight buzz afterwards. It’s an acquired taste that gets increasingly better with every bite. Is it strange that I find myself craving
some right now? -Noe Alonzo, Seoul

There you have it, ten of the most “bizarre” foods that you can find in Korea. Tried them all already? Don’t worry that there aren’t any more challenges for your palate – we didn’t even begin to talk about all the weird and wonderful seafood dishes that Korea has to offer!